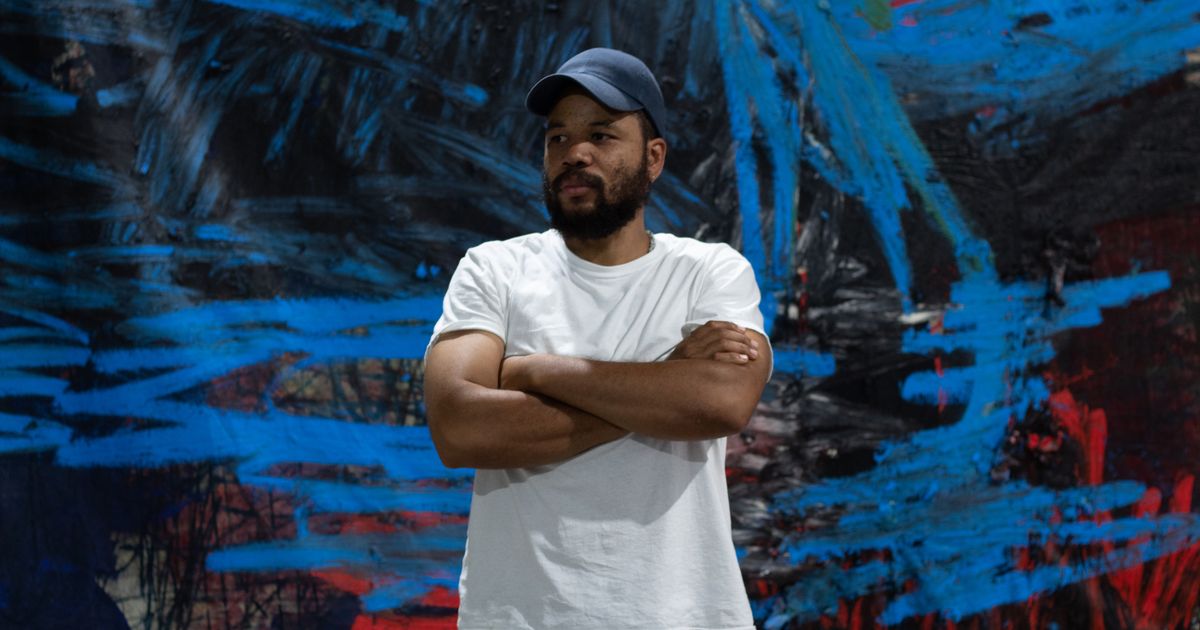 In this episode of A brush with…, Ben Luke talks to the British Colombian artist Oscar Murillo about the defining cultural experiences and influences of his life. Born in La Paila, Colombia in 1986, Murillo lives between Colombia and London. He studied art first at the University of Westminster and then at the Royal College of Art, both in London. Murillo first shot to fame in the art world with paintings that attracted huge attention in 2013—canvases with loose, scratchy, expressive marks, patches of pure colour, and daily dust and grime from the studio, scrawled with words such as “burrito”, “yuka” and “chorizo”. But he has also consistently made works in sculpture, installation, performance and film. At the heart of his work is an engagement with language, with the nature of labour and production, with the movement of people and with fluid cultural identities. In this interview he discusses his major project Frequencies, in which children from more than 350 schools in 34 countries across the world were sent canvases that were affixed to desks, so that children could draw and write on them, consciously or unconsciously, over several months—and how the project relates to his own work. Murillo talks about his ongoing interest in class as well as race, in relation to his Colombian background. He picks out the artists and musicians that have most influenced him, such as Picasso and Jean Dubuffet, and discusses his admiration of the work of late Nigerian curator Okwui Enwezor. And he answers the questions we ask all our guests: what are the essential rituals in his working life? If he could live with just one work of art, what would it be? And what is art for?• A brush with… series 5 runs from 28 July- 18 August 2021, with episodes released on Wednesdays. You can download and subscribe to the podcast here. This episode is sponsored by ARTIKA.

Oscar Murillo on… his series of ongoing works Surge, based on Monet’s water lilies and the French artist’s condition of cataracts “This idea social cataracts is something that grammatically doesn’t make sense. But poetically, in your head, it does somehow—the idea of society having cataracts, that we’re in this kind of blinded existence; the façade of beauty. This idea of cataracts as darkness.”

… his unconventional attitude towards art”I don’t like having art in my periphery. The moment I feel like a work is completed I get it away from my sight. I think the idea of making a work is more about letting something out of my body, and not contemplation. Even with my own shows, I hate the fact that they are my shows, because I have seen them for so long that I don’t see them any more. It’s frustrating. I wish I could just walk into my own exhibitions without having had to spend months or even years preparing them. This is going to sound arrogant, but I think I’d be very impressed.”

Oscar Murillo in front of his work at the exhibition Violent Amnesia, Kettle’s Yard

… the work dedicated to late curator Okwui Enwezor”The famous quote I painted from John Donne’s Meditation XVII (1624): “No Man is an Island, entire of himself” is an homage to Okwui, this colossal figure that lost his battle with cancer and passed away. He was definitely a father figure to me. Despite his Nigerian heritage he was a man of the world. He lived in the US and understood racial tensions there but also understood art. It’s been six years since he curated the Venice Biennale, which at the time was heavily criticised. But year on year it becomes so much in reference to society now.”• Oscar Murillo’s Frequencies, presented by Artangel, is a free exhibition at Cardinal Pole School in Hackney in London and continues until 30 August; some canvases from the Frequencies project also feature alongside paintings in Oscar’s exhibition MAM Project 029: Oscar Murillo at the Mori Art Museum in Tokyo until 26 September. Oscar Murillo is at KM21, The Hague and runs from 11 December to 17 April 2022; Oscar Murillo’s book By Means of a Detour, co-published by Kettle’s Yard in Cambridge and Kunstverein in Hamburg, £40/€43.

After soul-searching, Guggenheim names a Black ‘culture and inclusion’ officer and a human resources chief
Helen Frankenthaler Foundation announces its first round of climate grants to art institutions
To Top
error: Content is protected !!
Top