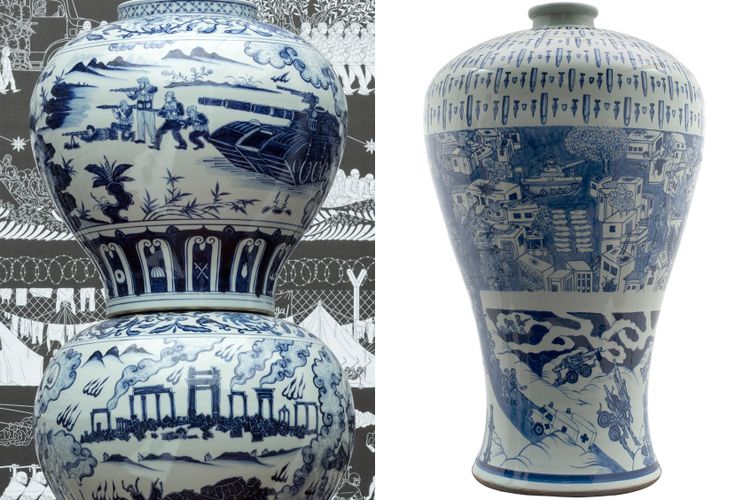 
Left: a detail of Ai Weiwei’s Vases with Refugee Motif as a Pillar (2017) and right: Raed Yassin’s the Battle for Tal al-Zaatar, from the China series (2012)
Ai: courtesy of Ai Weiwei Studio. Yassin: courtesy of the artist


The Chinese artist Ai Weiwei has dismissed suggestions that his recent ceramic sculptures were inspired by the work of the Berlin-based Lebanese artist Raed Yassin.

Speaking to The Art Newspaper, Yassin says there are “striking similarities” between Ai Weiwei’s Vases with Refugee Motif as a Pillar (2017), which are painted with images of the Syrian civil war and the journeys undertaken by refugees, as well as other related works, and his own porcelain series China (2012) and Yassin Dynasty (2013), which depict scenes from the Lebanese civil war. Both artists used Chinese-style blue and white painting on ceramics, and both had the works made in Jingdezhen, the porcelain-producing capital of China.

Yassin says he was alerted to the similarities in Ai’s works when the Chinese artist posted images on Instagram. “There were a lot of people just tagging me and telling him that there was a similar work five years ago by a Lebanese artist called Raed Yassin,” he says. “The conceptual framework behind the work was that it would be made in China and eventually copied or multiplied,” he adds, “but I didn’t expect it to happen in this way.”

Ai denies copying Yassin’s work, saying he has been making porcelain works since 1977 and has developed a profound knowledge of the medium. “Vases with Refugee Motif as a Pillar […] was inspired by photographs and film footage taken in refugee camps, as well as from traditional Greek and Chinese mythology, European history and contemporary events,” Ai tells The Art Newspaper. He adds that the use of pottery as a means of storytelling began thousands of years ago in ancient Greece and was popular during the Yuan and Ming dynasties in China. “I could have ‘copied’ those works,” he says.

Yassin’s China series won the Abraaj Capital Group Prize in 2012 and, along with his follow-up series Yassin Dynasty, was shown widely in exhibitions at Art Basel Hong Kong and at museums in Singapore, Belgium, Dubai and the UK. “I am 100% sure that Ai Weiwei saw my vases,” says Yassin. Ai, however, says he does not know anything about the artist or his work. “Therefore, the assertion that I had copied the work is ridiculous,” Ai argues. “I wish all artists well and encourage them to copy traditional Chinese and Greek art, or even my work.”

In fact, the Lebanese artist did copy a work by Ai Weiwei. Dropping a Yassin Dynasty Vase (2012-13) is directly inspired by the Chinese artist’s famous Dropping a Han Dynasty Urn (1995), in which Ai destroys a 2,000-year-old Chinese vase. Yassin says the difference is that he explicitly acknowledges the original work in his own description. “I don’t want to sue him—he’s an artist I respect and I just want the acknowledgement,” Yassin says.