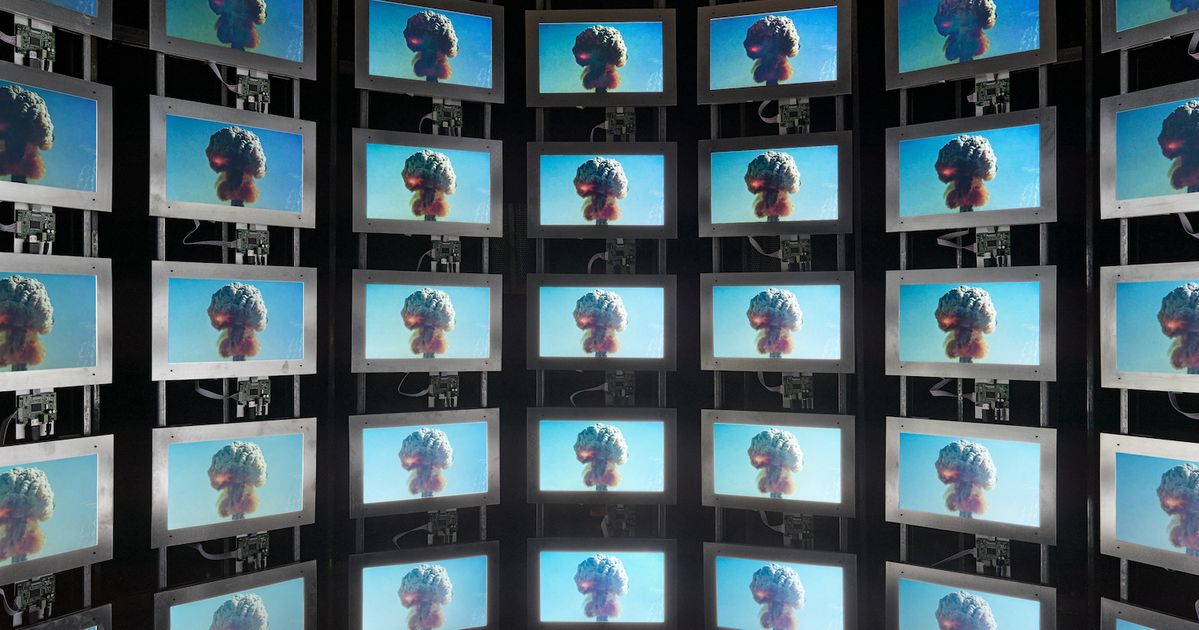 The New York-based artist Smriti Keshari and the writer Eric Schlosser have collaborated to produce a renewed iteration of their hypnotic film The Bomb at Pioneer Works in New York. The hour-long film was first shown as an immersive work at the 2016 Tribeca Film Festival, where it comprised eight screens and a live musical performance. It features archival footage of nuclear weapons and explosions backed with an ambient electronic score, and aims to highlight the “emotional, haunting beauty of these machines”, Keshari says.The multi-channel work features Boschian scenes ranging from mushroom clouds to the panoramic landscapes that have been used as nuclear test sites, evoking the silent impact of nuclear fallout. The idea for the project started with Schlosser’s Pulitzer Prize-nominated book Command and Control: Nuclear Weapons, the Damascus Accident and the Illusions of Safety (2013), which deals with the history of nuclear weapons systems in the US and centres on an accidental missile explosion in Damascus in 1980. “The book had a profound effect on me and reads like a thriller,” Keshari says. “Nuclear weapons are out-of-sight, out-of-mind and not a part of most people’s imaginations. Works like this can maybe make it seem more real, or inspire people to understand the issue on a deeper level.”Keshari also notes the influence of an essay by the feminist writer Carol Cohn titled Sex and Death in the Rational World of Defense Intellectuals (1984), which deals with the sexual symbolism and gendered language of nuclear weapons. “You just have to look at some of these missiles and bombs and the symbolism is not subtle—it’s the embodiment of toxic masculinity,” Schlosser says.

The work resonates with other concerns around technological advancement, like artificial intelligence and autonomous vehicles, and also aims to consider the overlooked notion of “nuclear colonialism” during a time of heightened racial tension, according to Schlosser. “These weapons have been tested and used against non-white people, from the way Japan was targeted to Pacific Islanders and Indigenous people in the US and Australia.”The film has previously travelled in various formats to events like Glanstonbury and the Nobel Peace Prize ceremony, and premiered on Netflix in 2017. As an artist-in-residence at Pioneer Works, Keshari sought to reimagine the film in a blackbox format that resembles a control centre, giving the piece a sinister effect. The new format will also make it easier for the piece to travel in the future.The exhibition features a print-out with information on nuclear weapons and the coalitions working to abolish them but “does not want to give viewers a recipe for how this social problem should be solved”, according to Schlosser. Instead, it aims to convey the “beautiful but perverse attraction” humans have to nuclear weapons and explosions, he adds. The work was originally timed to coincide with the 75th anniversary of the nuclear bombings of Hiroshima and Nagasaki but was postponed due to the coronavirus pandemic.The Bomb, on view until 23 May at Pioneer Works, 159 Pioneer Street, Brooklyn