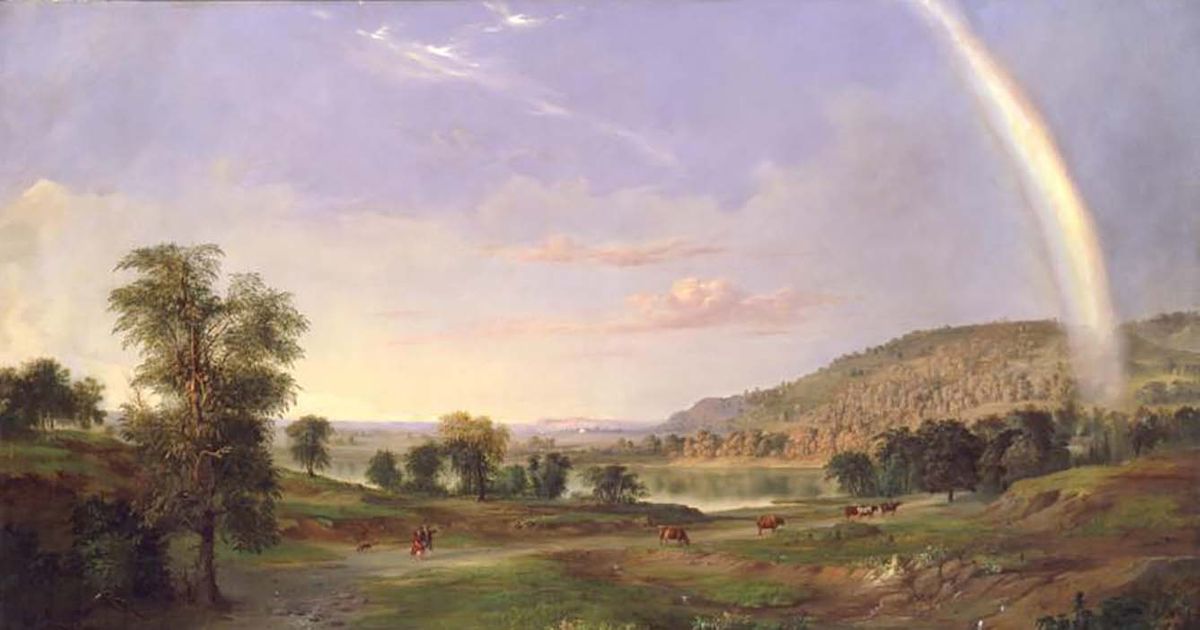 In a US Capitol gift-giving ceremony following the inauguration of President Joseph R. Biden Jr, Congressional representatives today presided over the presentation of an 1859 painting by a Black artist from Ohio that seems to depict a moment of hope.The work, Robert S. Duncanson’s Landscape With Rainbow, was borrowed from the Smithsonian American Art Museum under First Lady Jill Biden’s guidance and was proffered to Biden at the Capitol this afternoon by Senator Roy Blunt, a Missouri Republican. In addition to President Biden and Dr Biden, Vice President Kamala Harris and her husband Doug Emhoff were in attendance. Blunt described Duncanson as “the best known African-American painter during the years of the Civil War”. The Smithsonian American Art Museum’s website says the artist was based in Cincinnati and supported by abolitionists who bought his paintings and sponsored a trip he made to Europe to study Old Masters. “In this pastoral landscape, a young couple strolls through fertile pastureland, toward a house at the end of a rainbow,” it says. “The cattle head home toward the nearby cottage, reinforcing the sense that man lives in harmony with nature.”“Duncanson’s vision of rural America as Arcadia, a landscape akin to paradise, is a characteristic feature of his work, a late hope for peace before the onset of Civil War,” the website continues. After the presidential tenure of Donald Trump, the painting seems to symbolise a new beginning and a more multicultural approach to leading the nation. “I like the rainbow, good things to follow,” Dr Biden told the crowd during the presentation of the Duncanson painting. “Let’s hope,” Senator Blunt responded.The US Capitol gifting ceremony replaced what would in Covid-free times normally be an inaugural luncheon. Amy Klobuchar, the Democratic senator from Minnesota, presented Biden and Harris with Lenox crystal vases from Pennsylvania, where Biden was born.The House’s Democratic Speaker, Nancy Pelosi, and Senator Mitch McConnell, the leader of his chamber’s Republican contingent, presented Biden and Harris with flags. Representative Kevin McCarthy, leader of the House’s Republican minority, and Steny Hoyer, leader of its Democratic majority, gave them framed photographs of their swearing-in ceremonies.

Video | In pictures: Donald Trump’s presidency as the art world saw it
Comment | Tearing down troubling statues is not lying about our history—it is removing impediments to truth
To Top
error: Content is protected !!
Top