Berlin celebrates fall of the wall with art installations, projections and an app 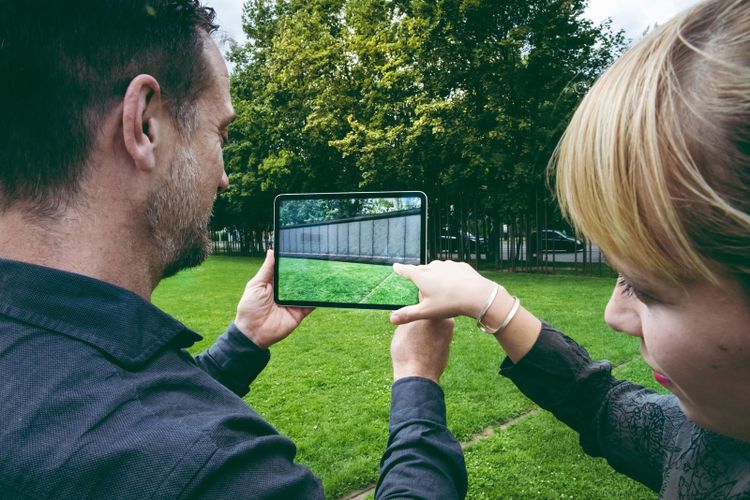 The Berlin Wall comes back to life via the MauAR app
© BetaRoom. Photo: Stefan Vincent


Patrick Shearn, an artist who creates large-scale, suspended outdoor installations for events such as the Coachella music festival with his team at Poetic Kinetics, plans to float 30,000 messages at the Brandenburg Gate for the 9 November anniversary of the fall of the Berlin Wall.

Berliners and visitors are invited to submit their hopes, wishes and memories to be included in a gigantic banner that is to float near the gate—a reference to the protest banners of the demonstrators calling for an end to political repression by the Communist government of East Germany in the autumn of 1989.

The installation is part of a week-long festival running from 4-10 November for the 30th anniversary. It aims to “celebrate the successes of the revolution and to recall the joy at regained freedoms and the risks and pains of social upheaval,” according to a statement from the organisers, Kulturprojekte Berlin. Daniel Barenboim will conduct the Staatskapelle orchestra at the Brandenburg Gate in a concert on the evening of 9 November.

A 3D video projection at the Humboldt Forum will recreate the historic façade of the former Palace of the Republic, which was torn down to make way for the reconstruction of the royal palace. Projections recalling the demands of hundreds of thousands of demonstrators who faced down the East German regime on 4 November, 1989, will be shown at Alexanderplatz, with similar shows at other key historic locations such as the East Side Gallery, the former Stasi headquarters and the Gethsemanekirche, a church that served as a hub for the dissident community. A new augmented reality app, available for download at www.mauar.berlin, recreates the Berlin Wall at the original locations on a smartphone or tablet—for the duration of the festival, it will also recount historic events at the locations, allowing a user to take part virtually, for instance, in the demonstrations at Alexanderplatz.