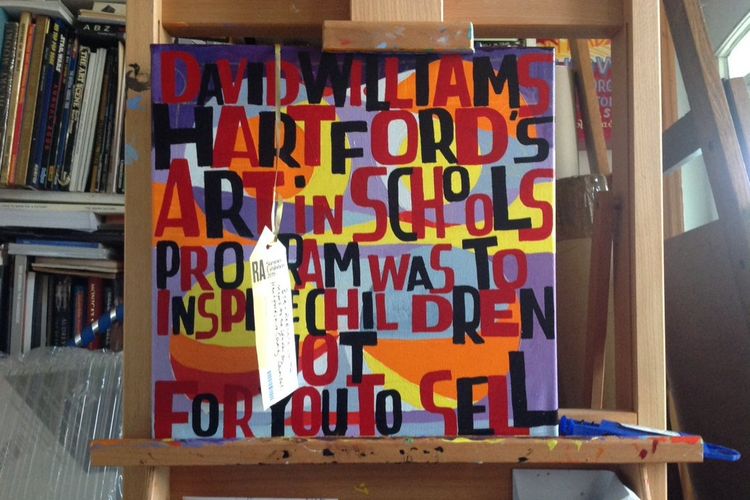 The artist Bob and Roberta Smith has submitted a work to the Royal Academy’s Summer Show (10 June-12 August) criticising Hertfordshire County Council’s decision to consign more than 450 works from its collection to auction.

The works are drawn from the Hertfordshire Schools Art Loan Collection—launched in the 1940s and comprising 1,496 works—which enabled children across the region to access works of art. The first auction of works from the collection of the Hertfordshire County Council, which was held on 21 March at Cheffins in Cambridge, raised more than £444,000 in total. A second auction took place yesterday at Cheffins; the auction house has not released details of the sale.

Bob and Roberta Smith told the leader of the Conservative-run council, David Williams, earlier this year in an open letter that “your council will be labelled as misunderstanding the needs of young people”.

His painting put forward to the Royal Academy, entitled Memo to the Leader of Hertfordshire County Council, is emblazoned with the words “David Williams Hartford’s Art in Schools Program was to inspire children, not for you to sell”. An RA spokeswoman says that the “work has been submitted for inclusion in the Summer Exhibition 2019”; Bob and Roberta Smith is a Royal Academician.

The council’s decision has also been criticised by the Art Fund charity, which asked for reassurances that most of the proceeds will go towards conserving the works retained by the council.

A council spokesman says:“We have not made any plans for the funding beyond what we have already committed to, improving the condition and public visibility of the nationally significant sculptures we hold and investing in the retained collection to improve its accessibility.”

More than 1,000 works will also be donated to regional organisations, the council adds. Williams has also responded, pointing out that the council strategy regarding the collection balances its fiduciary duty to the council tax payers.

Frans Hals court case may be settled but it raises questions over science, scholars and contracts
Twelve exhibitions not to miss during Frieze New York
To Top
error: Content is protected !!
Top