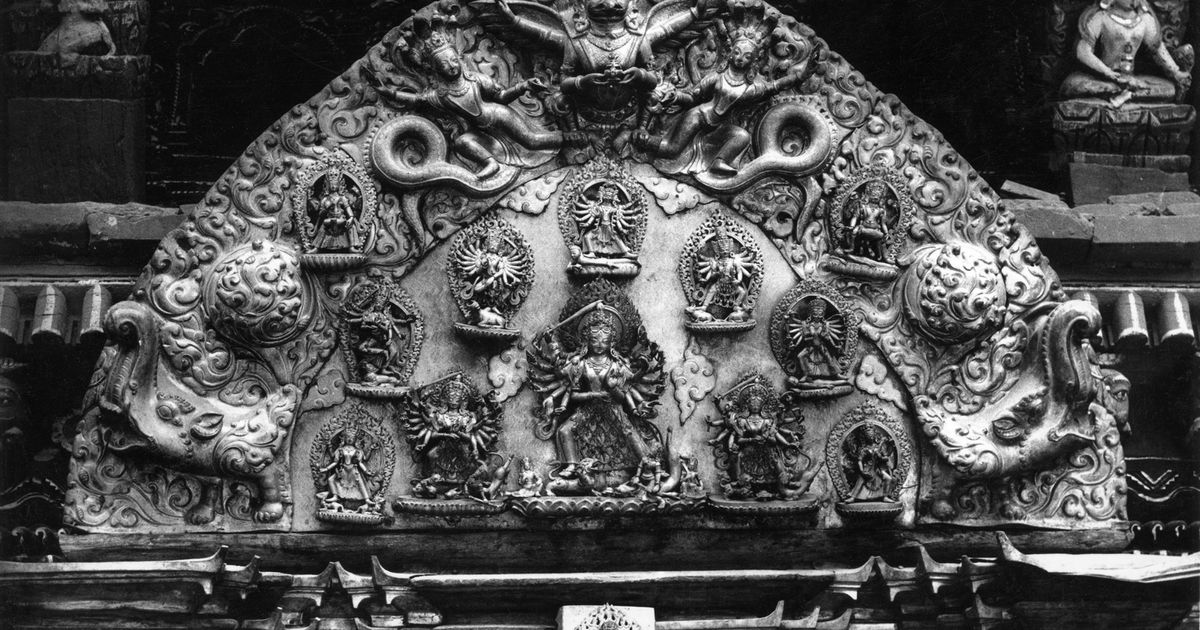 The frieze above the golden gateway of Taleju Bhawani Temple at Patan Durbar Square
Image: courtesy of Lost Arts of Nepal

A consignor has withdrawn five gilded bronze Nepalese figures from an online auction of Himalayan and Buddhist art at Bonhams in Paris after they were identified as looted from the temple gate of a royal palace in the Kathmandu Valley.The five gilded sculptures dating from the early 18th century were among 12 figures torn from a frieze above the golden gateway of Taleju Bhawani Temple at Patan Durbar Square around 40 years ago, according to the organisation Lost Arts of Nepal. The Patan complex, located in the foothills of the Himalayas, is a Unesco world heritage site. The sculptures, portraying the Hindu gods Shiva, Panchmukhi Hanuman, Devi, Chamundi and Bhairava, were listed with price estimates of €3,000 to €5,000 on Bonhams’s website.A spokesman for Bonhams wrote in an email in response to an inquiry from The Art Newspaper that the consignor had decided to withdraw the objects from the auction, which runs until 10 June. He did not respond when asked whether the seller is prepared to negotiate with the Nepalese claimants.

Twelve figures were torn from a frieze above the golden gateway of Taleju Bhawani Temple at Patan Durbar Square
Image: courtesy of Lost Arts of Nepal

“This find will help restore our faith,” said a statement sent by email by Lost Arts of Nepal. The group added that there were other items in the sale which it suspects are looted, but it does not have the photographic evidence to justify the claim.According to the Nepali Times, which first reported that the stolen items had surfaced at auction, the looting was recorded in a book by Jürgen Schick, Gods are Leaving the Country: Art Theft From Nepal. He described the plundering of the temple as “one of the most odious cases of art theft in Nepal.” Photographs show the gate before and after the removal of the figures, which were later replaced with replicas.

Centre Pompidou plans to open a satellite museum in Jersey City in 2024
Three exhibitions to see in London this weekend
To Top
error: Content is protected !!
Top