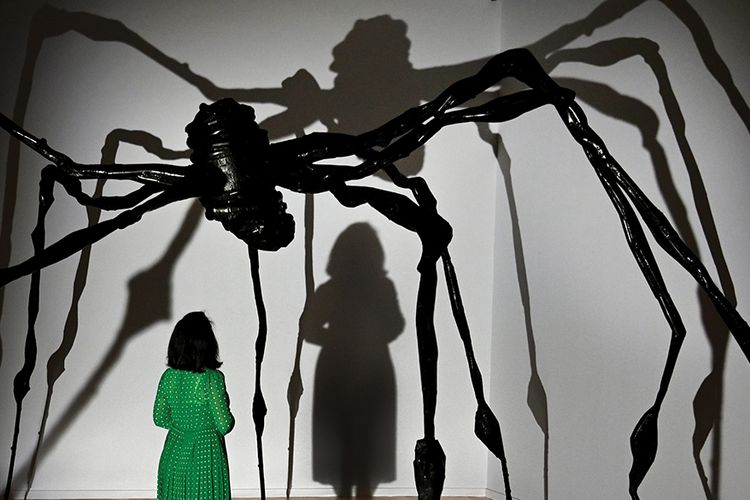 A woman looks at Louise Bourgeois’s Spider at Christie’s New York press preview on May 3, 2019
© TIMOTHY A. CLARY/AFP/Getty Images


When Louise Bourgeois’s monumental bronze Spider (1997) sold at Christie’s New York in May for a record $28m ($32m with fees), the French-American artist became not only the most expensive female sculptor, but also the second most expensive female artist at auction, surpassed only by Georgia O’Keeffe’s $44.4m Jimson Weed painting.

Over the course of her eight-decade career (she was almost 100 when she died in 2010), Bourgeois’s visceral work covered the gamut of human experience—from sexuality to mortality—and engaged with many Modern art movements. From the totemic Personages sculptures of the 1940s and 50s to her fabric creations, cage installations, prints and drawings, and those famous bronze spiders, Bourgeois’s work has global appeal, fostered by institutional shows from her hometown of New York to, more recently, Shanghai and Beijing.

However, Bourgeois “stated that having no market early on gave her a certain amount of freedom”, says Phillip Larratt-Smith, who was Bourgeois’s literary archivist from 2002 until her death. “This is one reason why she described herself as a lonely long-distance runner.”

Her market only really took off in the 1980s, after her first retrospective at MoMA in 1982, enabling her to start producing some of the large bronzes for which she is so well-known today.

Bourgeois was aware of the importance of archiving and organising her own legacy and set up the Easton Foundation to administer her estate, entrusted to her long-time assistant Jerry Gorovoy, now its president. But, Larratt-Smith says, “She did not get involved at all in the financial side of things. That was Jerry’s domain. She was fond of her dealers, though.” Those dealers included Robert Miller Gallery in New York, an early supporter at the start of the 1980s, along with Karsten Greve, who held Bourgeois’s first solo exhibition in France in his Paris gallery in 1990. Then there has been a long relationship with Cheim & Read, which still handles her estate in the US. The gallery temporarily closed at the end of last year with a show of her work, but is reopening in the fall on the Upper East Side with a group show that includes Bourgeois.

Hauser & Wirth also started working with Bourgeois in 1997, and since Cheim & Read closed, it has been the principal gallery for her estate (though others, such as Kukje Gallery in Korea and Xavier Hufkens in Brussels continue to deal in her work). Hauser & Wirth’s Marc Payot says: “America is a very important place for collectors and for the institutions that collect her.” Major holdings of her work include the Glenstone private museum near Washington DC, which closed a show dedicated to Bourgeois at the end of June, New York’s MoMA, the National Gallery in Washington, DC, and SFMoMA in San Francisco. In Europe, the Tate in London and Pompidou in Paris have notable collections, Payot says, alongside the privately owned Sammlung Goetz museum in Munich. In Asia, where interest in Bourgeois’s work is growing rapidly, The Leeum, Samsung Museum of Art in Seoul has one of the large spiders.

Bourgeois knew many of her core collectors, such as Ginny Williams, Agnes Gund, Ydessa Hendeles and Ursula Hauser (whose collection, including Bourgeois’s work, is on show at Hauser & Wirth Somerset until 8 September). “Louise liked being in front of the works while talking with collectors,” Larratt-Smith says, “but once a work was completed, Louise wanted it removed from the studio. She did not live with her art.”

But while the spiders have trophy status, dedicated collectors of her work are broader in scope, with many who specifically collect female artists or are interested in ideas of bodies, gender, the female experience. Emma Baker, head of Sotheby’s London post-war and contemporary art evening sale, says: “Then there are those who are interested in Modern art from the 1940s, the totemic works reminiscent of Giacometti—she tapped into lots of different movements.”

Most commercially challenging are the phallic bronzes and marbles, according to Katharine Arnold, Christie’s co-head of post-war and contemporary art Europe, who says: “We [Christie’s] don’t often get the chance to sell the larger cage sculptures—they still largely go through the galleries. It takes a bit longer to find buyers for them—they’re not so easy to house.”

According to Payot: “By the beginning of June 2019, the total sale of Bourgeois’s works at auction, which currently totals $42m, excluding prints and multiples, has already eclipsed her former highest-grossing year at auction, which was $39m in 2015.”

Spiders top the bill: the top 10 auction results for Bourgeois are all spiders. “It is the motif that brings all her production together,” Baker says.

“The seven-metre versions of the spider (like that sold in May in New York) are pretty hard to come by—they’re very sought after,” Arnold says, adding that another from the edition of six made the previous world record when sold at Christie’s for £28.1m (with fees) in 2015. She adds that there is almost a going rate for some of the smaller wall-mounted spiders: in November 2017 in New York, Sotheby’s and Christie’s sold two similar 1990s spiders (the 2m-high Spider IV and 1.85m Spider II), both estimated at $10m-$15m, for $14.6m and $11.5m (with fees).

But as spiders become increasingly hard to find, prices are rising for Bourgeois’sother bodies of work. In May Sotheby’s sold Arch of Hysteria (conceived 1993, cast 1994), a monumental, suspended gold figure cast from Gorovoy’s body, for $5.6m (with fees) in New York, making it the most expensive non-spider work to be sold at auction. Arnold also points to the Personages: “That was her great corpus, which first put her on the map in the 1940s and 50s.” At Art Basel, Hauser & Wirth showed a group of four Personages priced at around $2.5m. “Ten years ago, that would have been about $600,000-$700,000,” Payot says.


Data compiled by Art Market Research shows that while auction prices for Bourgeois’s sculptures have risen 32,763% between 1990 and 2019 (analysed from 189 lots sold at auction), those for her unique two-dimensional works have remained steadier, increasing 2,071% between 1985-2019 (from 119 lots). Such statistics should be read with some caution, however, as not a huge amount of Bourgeois’s work has appeared at auction. “The two-dimensional works don’t have quite the same gravity as, say, the cages, or vitrines or sculptures,” Arnold concedes. Payot adds: “At this point, we’ve been mainly focused on the Spiders, Personages and fabric pieces, and less on earlier works on paper.”

The Easton Foundation and Hauser & Wirth are trying to grow the market for works on paper, however, with the release of some later pieces. Bourgeois’s late gouaches, which were the focus of the gallery’s Hong Kong exhibition during Art Basel in Hong Kong in March, priced between $150,000 and $750,000, all sold to Asian buyers. “That’s an area of the market we have been concentrating on and building up. The shows at the Long Museum in Shanghai and Song Art Museum in Beijing helped in terms of the perception in the region,” Payot says.

One advantage of having a well-organised estate is that “fakes are quickly weeded out”, Arnold says. “I’ve never encountered any fakes, and I think that’s to do with the studio and estate being very well organised and archived—we certainly would never enter anything into a sale without telling them,” Baker adds. Many of Bourgeois’s fabric works, which can be problematic in terms of condition, are also protected by vitrines.

But in terms of actually authenticating works, Payot says: “At this point, the estate completely stays away.” There is also no catalogue raisonné, he adds: “It will happen, but it’s not going to happen in the next couple of years. The foundation isn’t quite ready—it’s a big undertaking.”

Correction: The print version of this story reported that Cheim & Read gallery, which still represents Bourgeois’s estate, had closed. After we went to press, the gallery announced it would be reopening with a space on the Upper East Side. The article has been updated online.