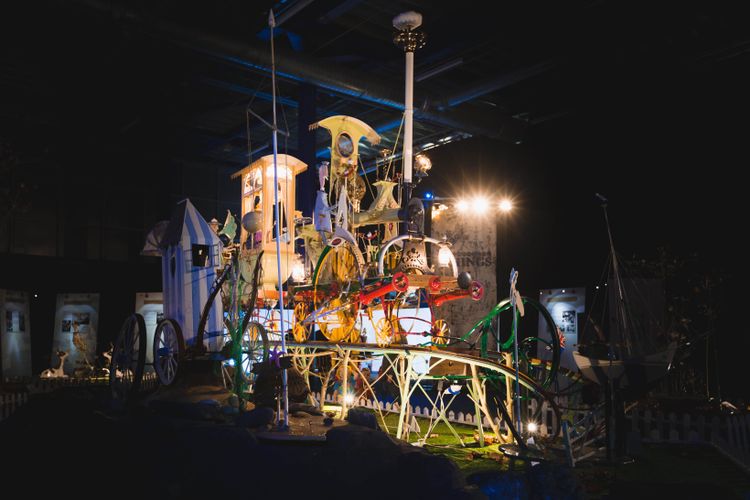 Emett’s automata, A Quiet Afternoon in the Cloud Cuckoo Valley
Courtesy of Bonhams

Bonhams are to sell eight enormous machine sculptures that form A Quiet Afternoon in the Cloud Cuckoo Valley by Rowland Emett (1906-90), the inventor and artist best known for designing the flying car in Chitty Chitty Bang Bang.

The automata are the largest works to have ever been shown in Bonhams’s New Bond Street saleroom in London and will be on view throughout August before the sale on 3 September, when they are estimated to sell for around £250,000-300,000.

Emett came to prominence as a cartoonist for Punch; then the British government commissioned him to design the Far Tottering and Oyster Creek Branch Railway, a train ride set up in Battersea Park to celebrate the Festival of Britain in 1951. It carried two million passengers and earned back its construction costs in under three weeks.

He designed not just the flying car in Chitty Chitty Bang Bang, but also the eccentric inventions of Caractacus Potts, played by Dick Van Dyke, which featured in the 1968 film.

By then, Emett was already a star in the US—Life magazine published a major profile in 1954—and institutions such as The Smithsonian, the Chicago Museum of Science and Industry and the Ontario Science Centre house the bulk of his major works.

He also won commissions for public sculpture, including Cloud Cuckoo Valley, but by the time it was complete in 1984, local authority restructuring meant there was no longer a place for it and it sold privately to the current owner.

First exhibited in 1992 in Spitalfields Market in London, it was stolen seven years later, nearly meeting its end at a scrapyard. Following its recovery, the entire sculpture underwent restoration, adding a digital control system, prior to going on display in 2014 at the Birmingham Museum and Art Gallery in a four-month exhibition titled Marvellous Machines, The Wonderful World of Rowland Emett, boosting visitor numbers 70% over expectations for the period.