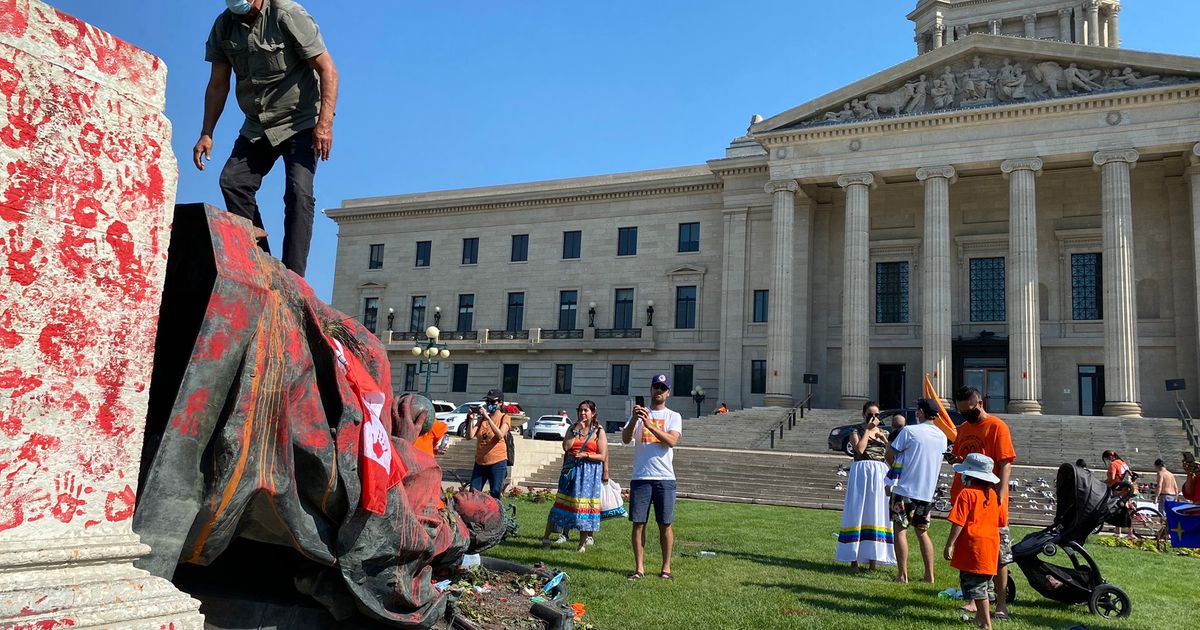 Statues of Queen Victoria and Queen Elizabeth II were pulled down by protestors in Winnipeg, central Canada, yesterday. The monuments were toppled at the Manitoba legislature on Canada Day, an annual celebration on 1 July marking the country’s confederation. Demonstrators were venting their anger after hundreds of unmarked graves were found in recent weeks at former residential schools for Indigenous children. The monument to Queen Victoria, designed by the UK sculptor George Frampton, had stood in front of the legislative building since 1904. It shows the late monarch sitting on a throne holding an orb and sceptre. Demonstrators toppled statues of Queen Victoria and Queen Elizabeth in Winnipeg this afternoon during rallies honouring the children discovered in unmarked graves on the sites of former residential schools over the past month. pic.twitter.com/Zx0aqPGcOW— APTN News (@APTNNews) July 2, 2021 The toppled statue was left covered in red painted handprints while a sign saying “We were children once. Bring them home,” was left leaning on the plinth. APTN news posted footage on Twitter of the Victoria statue being toppled. Meanwhile, on the east side of the legislature grounds, a statue of Queen Elizabeth II was also overturned. The move will ignite further debate about the status and value of historic statues, especially colonial-era works, in contemporary society. Monuments in the US, UK and Canada have come under scrutiny in the wake of the Black Lives Matter protests and the death of George Floyd in May last year. One commentator wrote on Twitter that “cancel culture has no end”, while another said that “Indigenous people have suffered for centuries at the hands of British settlers”. More than 150,000 Indigenous children were forced to attend residential schools in Canada as part of a government campaign aimed at assimilating them into society (the schools were open from the late 1800s, when Queen Victoria ruled the British Empire, to the 1990s). Earlier this month, the Vancouver-based Haida artist Tamara Bell installed 215 shoes on the steps of Vancouver Art Gallery in honour of the 215 Indigenous children whose unmarked graves were discovered in May in the grounds of a former residential school in Kamloops, British Columbia. The piece has become a memorial for those mourning the loss of the 215 children, as well as the estimated 6,000 others who died in the schools administered by churches and federal government for more than a century. Members of the public have added to the installation, laying candles, flowers, toys and messages of condolences alongside the rows of shoes. The Canadian prime minister Justin Trudeau says in a statement: “The horrific findings of the remains of hundreds of children at the sites of former residential schools in British Columbia and Saskatchewan have rightly pressed us to reflect on our country’s historic failures, and the injustices that still exist for Indigenous peoples and many others in Canada.”