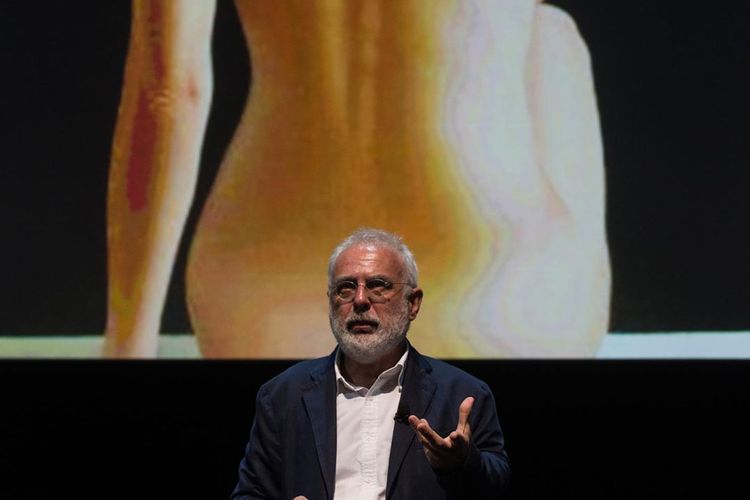 The curator Francesco Bonami has launched a satirical attack on the nationalistic policies of the current Italian government.

In a series of videos posted on Instagram, Bonami, who directed the 2003 Venice Biennale and served as a senior curator at the Museum of Contemporary Art in Chicago for a decade, announced that he is launching a new political party called EXAGERAMOS! and then outlined a series of new laws he intends to introduce in Italy.

“Curators—global and multi-cultured—the party is finished. No more biennales around the world. Biennale is like mozzarella and the pizza, it’s our product. So I’m going to sign a decree that [doesn’t] allow anybody to use the name ‘biennale’ outside Venice,” he announced in a video posted yesterday.

Bonami told viewers that he would “sign a new law…that will forbid the Venice Biennale to invite foreign artists. Only Italian artists”

In other videos posted on instagram last week under the name Childish Bonamino (@thebonamist), a reference to Childish Gambino, the rap alter ego of the US actor Donald Glover, Bonami told viewers that he would “sign a new law…that will forbid the Venice Biennale to invite foreign artists. Only Italian artists” while another decree “will forbid all the garbage contemporary art in galleries and museums. From September, Italian art first…And we will put in nice little boxes all the shitty art that comes from abroad and we send it back to their country. Have a good evening and eat a lot of tiramisu. It’s bullshit that it’s giving you cholesterol.”

In yet another video he encourages viewers to “go out and drink two bottles [of] Lambrusco, it’s very good for your liver; don’t listen to people that say it’s not good. And drive as much as you want. You can drive while you’re drunk, it’s only immigrants who cannot do that.”

A coalition between the far-right Northern League party and the populist Five Star Movement has governed Italy since June 2018. In that time, the deputy prime minister Matteo Salvini has presided over drastic measures to reduce immigration including closing Italy’s ports to migrant ships, abolishing key protections for immigrants and making it easier for them to be deported.

Italy’s cultural policies have also veered towards populism and xenophobia. Earlier this year, the culture ministry said it would renege on the promised loan of Leonardo paintings from the Uffizi Galleries in Florence to the Louvre in Paris for the French museum’s upcoming exhibition on the artist. Explaining the decision, Lucia Borgonzoni, the undersecretary for the Italian ministry of culture, told reporters that “Leonardo is Italian; he only died in France… giving the Louvre all those paintings would mean putting Italy on the margins of a great cultural event.” The culture ministry is also reviewing the decision to allow foreign directors to lead Italy’s museums, a key cultural reform of the previous government.