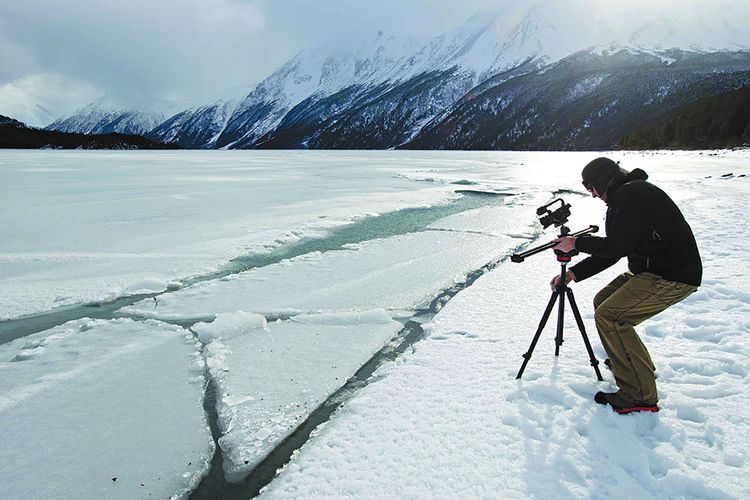 
When Aron Crowell, the director of the Smithsonian Institute’s Arctic Studies Center at the Anchorage Museum in Alaska, thinks of its collection, he thinks of ice—more specifically, vanishing ice. This is because many of the pieces in the collection were designed to work in an environment that has largely disappeared.

One such object, which sits in a glass case near the centre of the gallery, is a sculpted float that Inupiaq hunters once used to help keep their nets hanging vertically beneath the Arctic ice. The palm-sized piece was carved to represent a woman’s face, complete with ivory earrings decorated with seal motifs. In another case is an ice scratcher, made from four seal claws neatly inserted into a smooth wooden handle. Hunters would use this when approaching a seal sunning itself to mimic the sound of flippers on ice and mask their own steps. Both of these require a landscape frozen solid enough to be traversed by hunters. Today, Crowell says, that no longer exists.

Crowell is one of many Smithsonian researchers using the institute’s collections to understand how climate change has affected a specific place. The artefacts in the Anchorage collection are unique because they show the patterns of life in Alaska before the impact of global warming. When many of these objects were acquired in the late 19th century, Crowell says, “people would literally just walk out from the village on the ice” to hunt the seals and walruses that sustained many Arctic coastal communities in Alaska.

Anthropologists know so much about these artefacts today in part because of the lucky circumstances around the Smithsonian’s earliest holdings. “The few institutions that got started in the 1850s and 1860s had a big advantage,” says William Fitzhugh, the director of the Smithsonian’s Arctic Studies Center in Washington, DC, “because the stuff was being collected by naturalists rather than by anthropologists”. These naturalists, Fitzhugh says, “were thinking of anthropological collections the way zoologists were thinking about birds and animal species”. They recorded oral histories, documented how and when different cultures hunted animals, and described how people and animals responded to their climates. Meanwhile, the anthropologists that many institutions would send out a few decades later were uninterested in how cultures interacted with their environment.


The detailed environmental information collected by the naturalists is vital to researchers today because climate change impacts on areas differently. The average global temperature increase of about 1C in the past century does not reflect the situation in the Arctic, which is warming more than twice as fast. And in Utqiagvik, a village 15 miles from where the ice scratcher was collected, the average temperature in October has increased almost 7C since 1978. While artefacts may not provide exact data like temperatures, knowing that reliable sea ice existed along certain coastlines for centuries is key to understanding the climate texture of the past. And as a staggering report issued by the UN on Monday has found, the ecosystems of the subarctic Pacific and western Arctic Ocean will be particularly affected by human-led climate change, including ocean acidification from increased carbon dioxide levels, plastic microparticles entering food networks, and “high levels of metals and persistent organic pollutants from industrial discharges and agricultural runoff, poisoning coastal fish harvests”.

In addition to using its own pieces to study climate change, the Smithsonian also funds the acquisition of new objects that can reveal more about environmental shifts over a larger scale. Scott Wing, the curator of fossil plants at the Smithsonian, has spent decades searching for fossils from the Paleocene-Eocene Thermal Maximum (PETM) era, 56 millions years ago. Scientists are interested in this period—when a dump of carbon into the atmosphere, perhaps released by methane deposits in the ocean floor, triggered a 5C or 6C increase in global temperatures—because it is the closest analogue to our current situation. If scientists can calculate how much carbon was released, they can determine how much it takes to warm the earth one degree.


But the PETM fossils Wing has been collecting from Wyoming and the Dakotas also provide insight into how the climate in those areas will change as the world warms. After all, he says, for policymakers and residents, local changes in temperature and rainfall, and the knock-on effects to weather and water levels, are more important. The fossils show that the local temperature shifts during the PETM were accompanied by water instability—perhaps seasonal dryness mixed with flooding. Wing is the first to say fossils like this do not give us the whole picture—but also that if we continue to investigate the clues of the past, we can prepare for the future.

How scientists are using art in environmental studies

For Dario Camuffo, an Italian climate scientist worried that Venice will soon be swallowed by the sea, studying paintings of the Grand Canal by Canaletto and Bernardo Bellotto has only increased his concern. The works, created with the aid of portable camera obscura, were detailed enough to capture the green algae belts left on buildings by the high tide and the water stairs that guests once used to climb from their boats to the palaces. Today, both are hidden by rising sea levels.

Fortunately for researchers, France’s longest glacier, the Mer de Glace, is also one of the country’s most painted scenes. Though the glacier was not measured until the 1890s, researchers have been able to use watercolours and daguerrotypes by the artist and critic John Ruskin to calculate that the glacier has retreated 2.7km since 1852. The drastic change is highlighted in an exhibition currently on view at the York Art Gallery in the UK, where Ruskin’s works show a river of ice while newly commissioned ink drawings and photographs by the contemporary artist Emma Stibbon, taken from the same perspective and in the same month, reveal an empty gorge.


Painters capture volcanic explosions in the intensity of their sunsets

Christos Zerefos, a head researcher for Greece’s Atmospheric Physics and Climatology Academy, has spent two decades studying paintings for signs of volcanic activity. During a particularly powerful eruption, volcanoes shoot fine particles of ash into the atmosphere that cause sunsets to appear abnormally crimson for up to three years. After analysing hundreds of paintings from 1500 onward, Zerefos and his team proved that artists reliably captured this effect by altering the red-to-green ratio in their sunsets after large eruptions. Such events are of interest to climate scientists because the ash particles also cool the planet by reflecting sunlight.

Camping out for Camp | The Art Newspaper
Art that breathes: Mexican murals aim to clean the air
To Top
error: Content is protected !!
Top