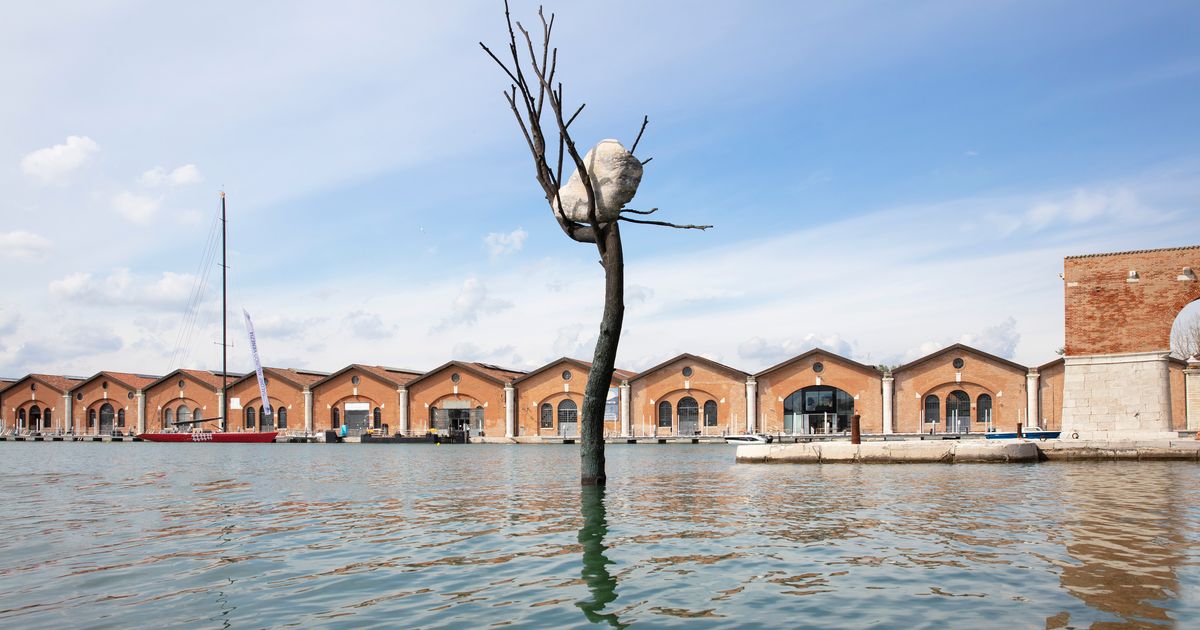 The Italian sculptor Giuseppe Penone has unveiled one of his most dramatic works at the Venice Architecture Biennale which opens this week (22 May-21 November) against the backdrop of the coronavirus pandemic. Penone’s installation The Listener, comprising an elm tree cradling a heavy stone, is submerged in the Venetian lagoon at the Arsenale site; the work was commissioned by the Vuslat Foundation, a non-profit organisation founded by the Turkish businesswoman Vuslat Dogan Sabanci. Penone tells The Art Newspaper that the piece “expresses ideas of fluidity, the branches are like rivers.” He adds: “The aim is to link up the elements—the light, the movement of the sun… it’s about the force of gravity, horizontality versus the verticality. The reflection of the branches and the stone in the water evokes a reverie, creating something very seductive for the public. ”

He also says in a statement: “A tree that rises from the water evokes the fluidity of which we find ourselves a part.” Asked if the work was challenging logistically to install, he says: “It has been easy to install, it’s been very professional and quick.” Similar works in the Ideas of Stone: Elm series have been shown in Chicago and Gstaad, Switzerland. The 17th edition of the International Architecture Exhibition, titled How Will We Live Together?, is curated by the Lebanese architect Hashim Sarkis. Some of the national pavilions examine themes that resonate in the age of Covid-19 (the Biennale was initially scheduled to launch last year but was delayed because of the pandemic).

The exhibition in the Swiss pavilion “investigates the subject of borders taking into account both the political and spatial dimension of the territory and its sensitive and social perception”, says a statement. The team of Geneva-based architects and artists behind the pavilion, including the sculptor Pierre Szczepski, documented the views of inhabitants on the border between Switzerland and its neighbouring countries, reflecting their changing views as the coronavirus crisis progressed. The national pavilion of the United Arab Emirates presents Wetlands, a research project centred on the country’s expansive salt flats (sabkha), while the artist Etel Adnan presents 16 works in the Lebanese pavilion (A Roof for Silence) entitled Olivéa, Hommage à la déesse de l’olivier. The Franco-Lebanese architect Hala Wardé, the curator of the pavilion, also looks at the “imprint of the sudden Port of Beirut explosion, on 4 August 2020”.

A photoshoot of Superflux’s Refuge for Resurgence at Sylva Foundation in Didcot, Oxford, ahead of La Biennale di Venezia 2021
Photo: Mark Cocksedge

Meanwhile, the London-based design studio Superflux presents a “multispecies banquet” called Refuge for Resurgence beneath the arches of the Arsenale. The idea is that humans and animals congregate around a dining table, taking their place on 14 stools in a post-Anthropocene world where homo sapiens are no longer the dominant force. The installation is described as “a symbolic home where all species can prosper with resilience, adaptation, and hope… Around this table, three humans—man, woman and child—join a fox, rat, wasp, pigeon, cow, wild boar, snake, beaver, wolf, raven and mushroom.” The cutlery has even been adapted for the different guests (the wasp has his own spoon).