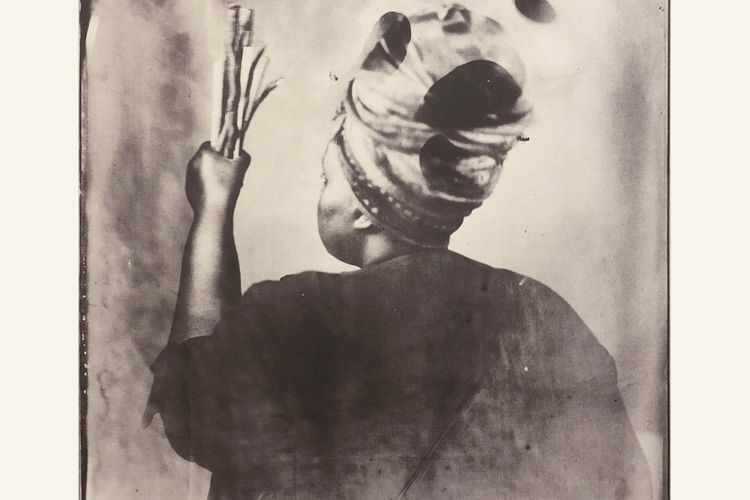 An edition of print portfolios by Khadija Saye, the young British-Gambian artist who died in the Grenfell Tower fire in London in 2017, are due to go on sale in aid of the Estate of Khadija Saye and the Khadija Saye IntoArts Programme. They will be shown as part of Rock My Soul, an exhibition of black female artists curated by the artist Isaac Julien at Victoria Miro in London from 2 October to 2 November.Saye was only 24 when she died and most of her work perished in the fire but the portfolios of nine silkscreen prints, titled Dwelling: in this space we breathe, have been produced from high-resolution scans of Saye’s original wet plate collodion tintypes.The series of self portraits, exploring the “migration of traditional Gambian spiritual practices”, was originally conceived by Saye for her inclusion in the Diaspora Pavilion at the Venice Biennale in 2017, organised by the artist Nicola Green. The connection with Victoria Miro dates back to then, Green says: “Victoria was looking for people to help with the Chris Offili opening party in Venice, and Khadija said yes straight away. She was ecstatic to meet her heroes—she worshipped Chris.”Green explains: “All of Khadija’s work was destroyed in the fire, apart from the six tintypes in Venice and three she had taken to be scanned in high-resolution—to make silkscreens—just before the fire.”The Khadija Saye IntoArts Programme is an arts education scheme run by IntoUniversity, a UK charity that provides learning centres for young people from disadvantaged backgrounds and which nurtured Saye’s interest in photography—she attended IntoUniversity’s after school clubs next to Grenfell Tower from the age of seven.The price of the portfolio, 49 of which are available, will increase from £10,000 to £25,000 as the editions are sold. Last October, the first of the 50 portfolios was sold at Christie’s in London for £8,750, while an original tintype from the Dwelling series, Nak Bejjen, sold for £43,750.