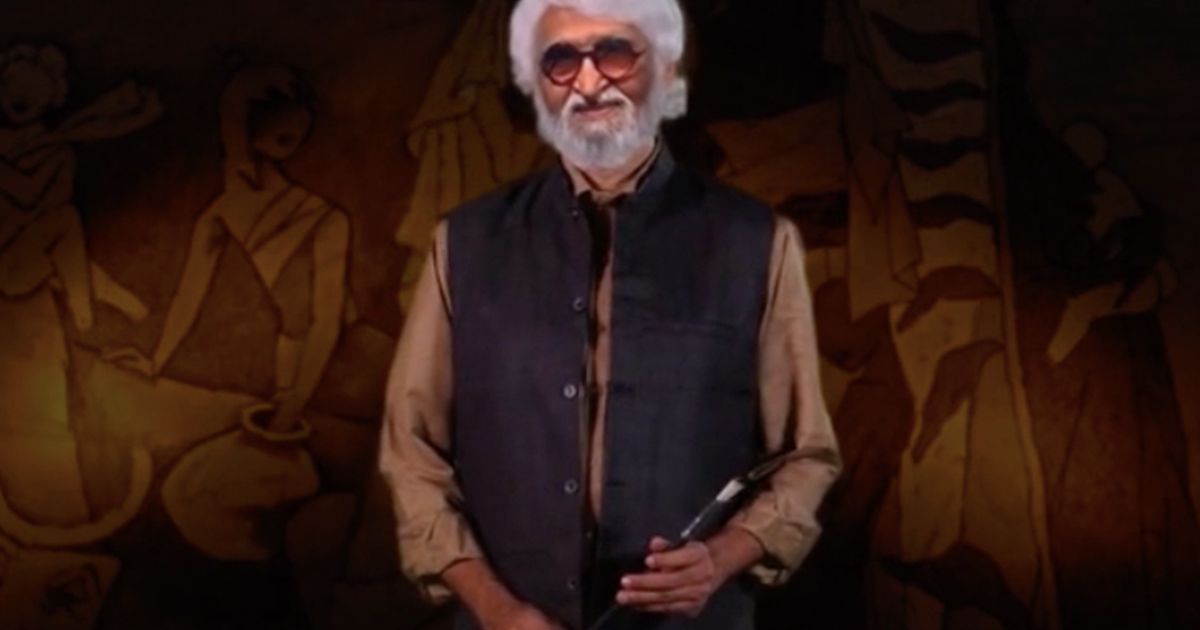 What would you say if you could speak to your favourite dead artist? Why did you choose that shade of blue? Did you really have to cut off your earlobe? Now fans of one of India’s most prominent artists M F Husain, who died in 2011, need wonder no more after a museum has brought him back to life (well, sort of). The Museum of Art and Photography in Bangalore (MAP), south India’s first major private art museum, has used artificial intelligence software to create a “conversational digital persona” of the Bombay Progressive painter. Technologies such as facial recognition, speech synthesis and language processing based on deep learning networks allow a three-dimensional hologram of Husain to respond to questions in real time.Created in partnership with Accenture Labs, the research and development arm of the global consulting firm Accenture, Husain’s “digital twin” can discuss topics relating to his life and work and is even capable of quippy comebacks. When asked by a visitor in a promotional video why his voice sounded strange, the hologram responded that he was “nearly 100 years old after all”. This virtual seance is one of many digital ventures that MAP, which is located in the “Silicon Valley of India”, has organised ahead of its physical opening. After plans to launch its 42,000-sq. ft space were derailed by the pandemic, the museum instead decided to go ahead with a digital opening in November that consisted of a six-day programme of guided collection tours, live-streamed performances and talks featuring notable South Asian cultural figures including the artist Jitish Kallat and the art historian B N Goswamy.

A rendering of the exterior of MAP
Courtesy of Museum of Art & Photography (MAP), Bengaluru

Touted by its founder-trustee Abhishek Poddar as a “museum of the future”, MAP will devote a sizeable portion of its programme to the confluence of art and technology, including a 40-ft interactive, multi-touch MicroTile wall that displays all the museum’s works on view in real time, holographic tables that display 3D version of works and virtual treasure hunts through the collection. Technological innovation on this scale is virtually unheard of within India’s museum landscape, which is largely defined by low levels of visitor engagement or outreach and antiquated programming. “MAP looks to redefine what an Indian museum can be,” Poddar says. “We have a 1,000-odd government museums but generally speaking, apart from some shining examples, they are subpar. A country like India could do with so much more. We need to excite and engage with people if they are going to step through our doors and technology is a major part of that.”

Poddar has donated the bulk of his collection to form most of the MAP’s 18,000 works of art and artefacts that tell the story of Indian culture stretching from the 12th century to today. It contains sections on photography, folk art, textiles and design as well as contemporary and 20th-century art, including works by major South Asian Modernists such as Tyeb Mehta. Initial capital for the museum came from the sale of some of Poddar and his wife’s collection, which was auctioned for around £3.4m Christie’s India in 2016, before raising funds from private investors including the Tata Trust and the billionaire biopharmaceutical entrepreneur Kiran Mazumdar-Shaw. Poddar says he was adamant to not seek government help to ensure the museum could be as agile and flexible as possible. He hopes MAP’s cutting-edge ideas will create a knock-on effect on other museums in the country and help revitalise a sluggish sector. “What can one little museum do? We can provide a catalyst. India’s airports are unrecognisable to what they were a decade ago, all because a few renovated and the rest needed to pull up their socks,” Poddar says.MAP has a particular focus on street art and, according to its artistic director Kamini Sawhney, it is one of the only museums in India with popular culture as a central part of the collection. She adds that the museum’s programme will also feature Indian classical dance and performance. “Collapsing the hierarchies between art forms is key to ensuring we are an expansive institution that addresses all avenues of creativity,” Sawhney says. The museum hopes to open its doors later this year. Until then, visitors can experience the AI artist, as well as much of MAP’s collection and programme via its website.

In Minneapolis, plywood boards become protest art worth preserving
‘Some Like It Not’: protesters rally against plan to install Marilyn Monroe sculpture near Palm Springs Art Museum
To Top
error: Content is protected !!
Top