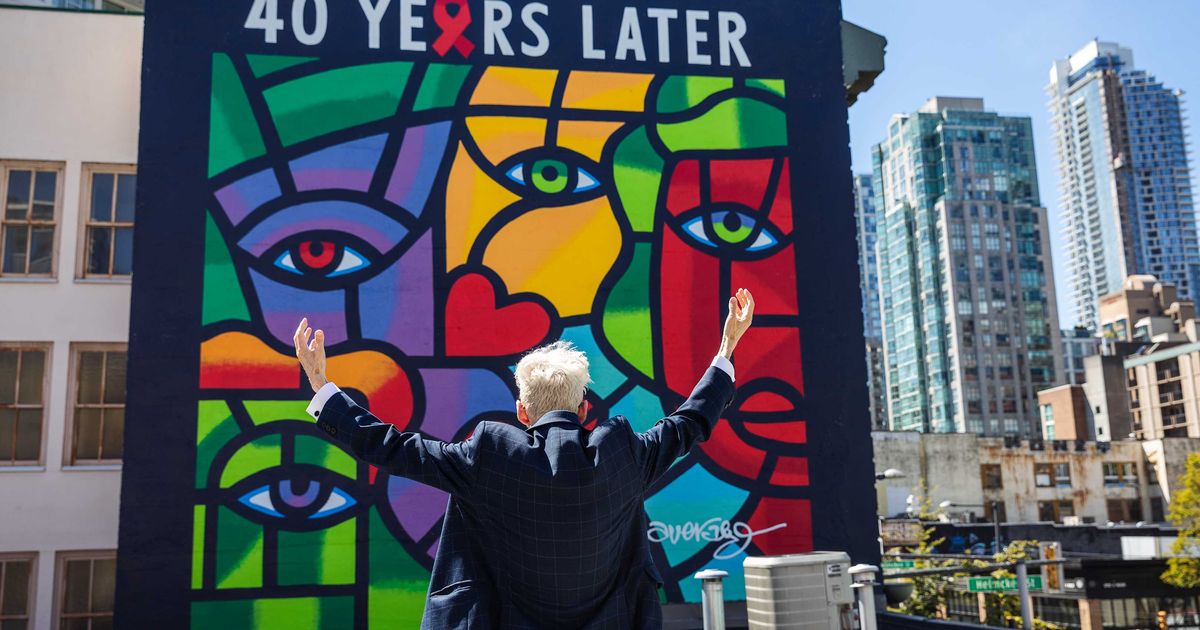 Acclaimed Canadian artist and activist Joe Average unveiled his latest work celebrating the global fight against Aids for the Vancouver Mural Festival this week. Marking the 40th anniversary of the first reported cases of the disease in the US, One World, One Hope—40 Years Later now adorns the North wall of Helmcken House, a residence in downtown Vancouver that provides affordable housing for those living with HIV/Aids.The design’s stained-glass effect and optimistic, brightly coloured, cartoon-like figures—a signature of Average’s work—remain compelling some three decades after it was first conceived. The mural image was originally Average’s winning entry for a poster contest to mark Canada’s first national Aids awareness week. The design then became the basis for an image Average painted in 1994, entitled One World, One Hope, commissioned for the 11th international conference on Aids held in Vancouver in 1996. The image was also used for Canada’s first postage stamp recognising the epidemic.

“I hope this reminds everyone of the work that is still needed in education, stigma removal and funding as we continue to search for crucial treatments and vaccines,” Average says
Photo: Mavreen David

The new mural, painted by Angelica Stirpe in vivid hues of purple, red, green and yellow, takes on a life of its own, embodying both the artist’s sense of compassion and joy. “The stained-glass effect represents the fragility of all mankind in the face of Aids,” the artist says. “The heart at the centre represents love, which I have always believed is the only thing that can move us forward and truly end this epidemic.” When the Aids conference opened in 1996 at BC Place Stadium, a huge quilt version of his image was unveiled, “and it got a standing ovation,” Average says. “That was when I realised it was something powerful, that touched people and it gave me chills.”The 63-year-old artist, who has been living with Aids since age 27, has been honoured for both his art and his humanitarianism. In 2002, then Vancouver mayor Philip Owen issued a civic proclamation to designate 3 November as “Joe Average Day”, acknowledging his efforts to fight homophobia and assist Aids charities such as A Loving Spoonful. The same week as his new mural was unveiled, Average was awarded the Order of BC, (British Columbia). the province’s highest form of recognition.“Aids is still a scourge across the globe,” the artist says. “I hope this reminds everyone of the work that is still needed in education, stigma removal and funding as we continue to search for crucial treatments and vaccines.”

Interview | Barbara Kruger: ‘Thank God I’m an artist and not a movie or Tiktok star’
‘Do leopards change their spots?’: Taliban threat to heritage in Afghanistan could be worse than in 2001
To Top
error: Content is protected !!
Top