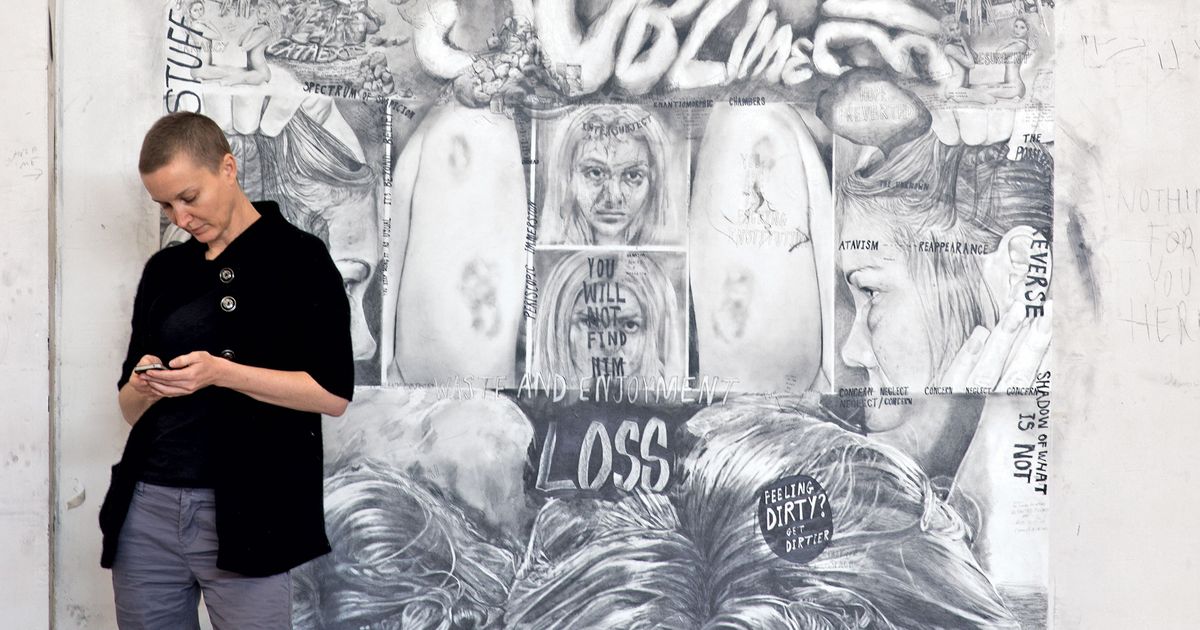 Kaari Upson standing in front of her drawing Consumptive Sublime (2012) in the New Museum’s 2017 show Good thing you are not alone
© Kaari Upson; courtesy of the artist

Kaari Upson, the interdisciplinary US artist who used sculpture, video, drawing and more to explore themes of identity, the human body, family and Americana, has died, aged 51. Upson, who was based in Los Angeles, died at Memorial Sloan Kettering Cancer Center in New York on Wednesday evening. The artist had been fighting breast cancer for many years, and spoke about how the illness influenced her work, such as a recurring use of mattresses and couches, which represent both the contours of a body and her own experience of being bedridden.

Upson was born on 22 April, 1970 in San Bernadino, California. She studied art at the New York Studio School before receiving a BFA in 2004 and then an MFA in 2007 from the California Institute of the Arts. As an undergraduate in 2003, Upson—who considered herself to be a painter at the time—was peeking through a large abandoned house across the street from her childhood home when she discovered a trove of personal letters, photographs, diaries and legal documents, all left behind by the former owner. (The house was destroyed in a fire about a year later.) Upson dubbed the man “Larry”, and these mementos became the seed for The Larry Project, an ongoing effort to understand and explore the man who had abandoned these personal mementos, forging his identity and filling in the gaps when necessary. She officially began The Larry Project in 2005 and continued working on it until 2012. Her exploration into the stranger—and into the very nature of identity—involved sculpture, installation, film, drawing, and more. Among other efforts, Upson created a life-size doll of Larry and erotic drawings based on him. “I started to realise that I was merging with him,” the artist said in a 2017 interview with Even magazine. In 2007, part of the years-long effort was included in Upson’s first ever museum exhibition at The Hammer in Los Angeles.

Parts of Upson’s long-running The Larry Project were included in a 2007 show at the Hammer Museum in Los Angeles
Courtesy Sprüth Magers. Photo: Hammer Museum/Joshua White

As with The Larry Project, Upson became known for leaping headfirst into obsessions and exploring singular topics for years, returning to an idea from a number of angles and through a variety of mediums. This resulted in a number of other massive artistic explorations, such as MMDP (My Mother Drinks Pepsi), which used her mother’s favorite soda brand as a jump-off point for videos, installations, drawings and sculptures. The series not only dissected the enduring impact of a parent, but pointed to larger discussions on how both consumerism and personal mythology are means through which we construct the notions of who we are.  In 2017—the same year that Upson was included in the Whitney Biennial—many of the artist’s long, unwieldy efforts came together in her first solo show in New York, Good thing you are not alone at the New Museum, curated by Margot Norton. Upson incorporated a slew of grand projects into this exhibition, including videos she had filmed of herself dressed as her mother shopping at Costco—with one installation employing real Costco shelves to serve as giant plinths—a massive project based on Las Vegas tract housing, dozens of life-size dolls, large drawings, Pepsi-cans cast to appear like archaeological relics, and more. “There’s no beginning, middle or end in the work. It could be the end of something that I’m not even recognising the line of, but then the beginning of something else that I don’t even know is about to happen,” Upson told The Art Newspaper in an interview about the show. “When I work on one drawing, and I add the first text, or even an image, it’s recycled back in on itself. Then an accident of two texts that I’m researching might overlap an image that I put on. The next thing that happens is that I make a video, and then an image from the video might make its way back in. As these things layer, it generally points to a direction of an answer to how a three-dimensional object might get made. It just keeps happening, so I keep trusting that.”

“I had seen Kaari’s work for the first time about a decade prior [to her New Museum show] and became absolutely hooked. At first, I must say that I did not exactly know how that happened. I think sometimes the best art doesn’t reveal itself fully at first encounter,” curator Margot Norton said in an Instagram post. “Every time I went to LA I would visit her—pouring over her deeply personal and densely packed graphite drawings, meandrous videos, and silicone cast mattresses and bulbous couches that look like they are about [to] swallow you whole. After every visit I found myself enthralled with Kaari’s spider-diagrams of connections, weaving bits and pieces together from one of her circuitous narratives to the next, and somehow, it actually started to make sense—I know I will find more and more connections like these in her work forever.”Norton added in a statement to The Art Newspaper that “in addition to being an artist I’ve long admired and have been honoured to work with, Kaari was a dear friend who brought an infectious enthusiasm, generosity, warmth, and a brilliant sense of humour wherever she went. Her innovative and powerful works give form to the desires and traumas that haunt the subconscious of American culture and her important contributions to contemporary art will undoubtedly continue to reverberate into the future.”Her Los Angeles gallery Sprüth Magers, run by Monika Sprüth and Philomene Magers, called Upson “brilliant and fearless” in a statement, adding that “she spent the last 15 years producing works that draw viewers into worlds at once familiar and unfamiliar, often ominous and always deeply alluring. We will all miss Kaari deeply and extend our sympathies to her family, her devoted friends and colleagues, and to all those who have been inspired by her powerful, unforgettable work.” Jay Jopling, the founder of White Cube, which represented her in London, said: “Kaari was a force of nature and a beautiful human being. Her work powerfully skewered the fallacies of the American dream.”As evident by her many sprawling, years-long series, Upson saw her practice and her artworks as dynamic, ever-changing entities. “I made objects that are meant to be broken down, and sculpture that’s meant to become a drawing or dust,” she told The Art Newspaper. “I’m not really interested in saying when something is finished.”