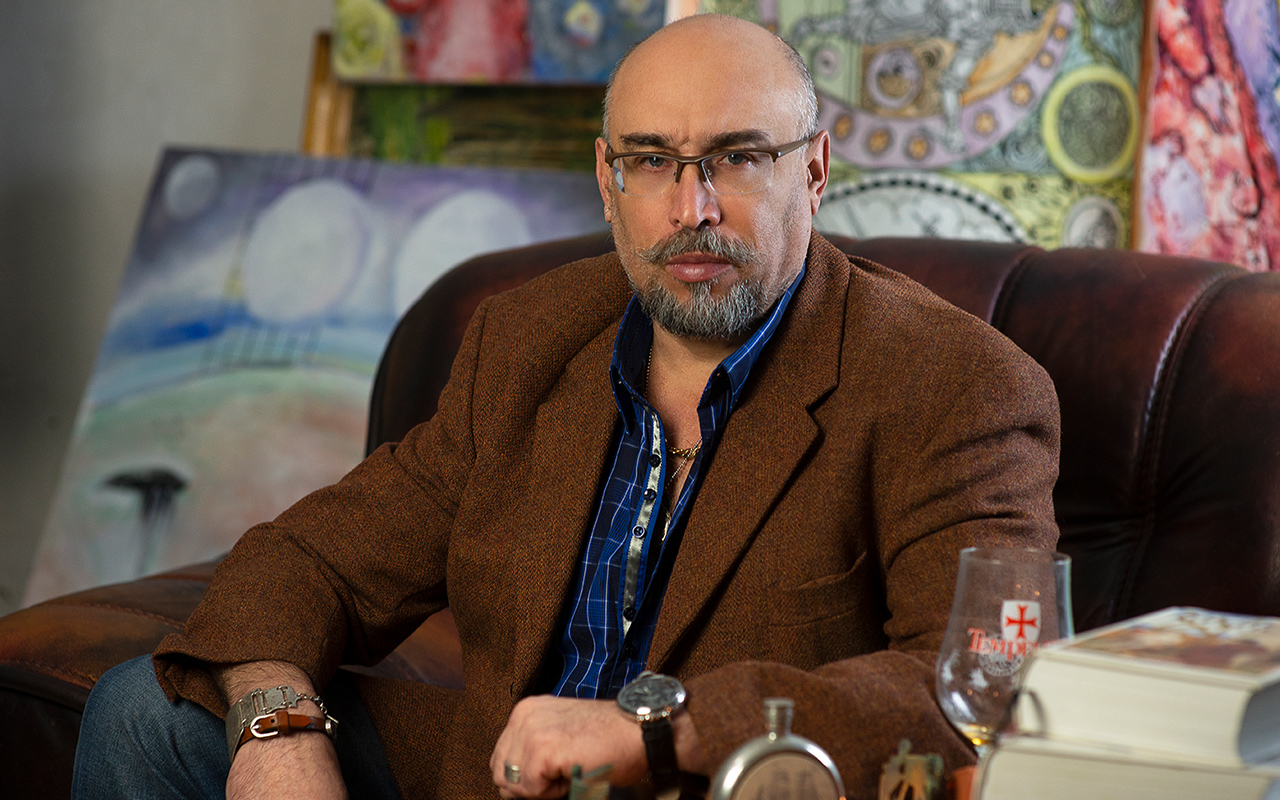 Konstantin Skoptsov is a citizen that Odessa is rightfully proud of. He is an internationally recognized Drawing Artist and Illustrator.

Skoptsov is a founder of a new art style he has named “Semantic Realism”, and based on inclusion of Philosophical and esoteric symbolism in art. Konstantin successfully exhibits in Paris, New York, Hong Kong and other cultural centers of the globe and his artworks are included in museum collections internationally. He could have chosen to immigrate to any part of the world — Europe or join his daughter who lives in the US, but Skoptsov chose to stay in Odessa, in his motherland country of Ukraine. Why? It is difficult to give a simple answer to that question. Possibly it is where he finds most inspiration. Or maybe he is just deeply rooted in Odessa and many life stories connect him to the city of his birth..

Skoptsov was born in 1958 in part of Odessa most remote from regular tourist destinations —  an industrial neighbourhood Zastava-2. His exotic looks give away a mix of different nationalities, but Konstantin can only guess of his true origins. His father lost entire family during WWII in early childhood and received his family name in the orphanage. Artist’s maternal Grandmother was also abandoned to the foster family, with the jewels left behind to help care for the child. There isn’t a trace of who were her parents and what had forced them to leave their daughter behind.

In school future artist was a rebel and after 8th grade had dropped without completing his primary education. Instead he enrolled into a professional certification program. His talents found better use at a Karate training and introduced Skoptsov to Eastern philosophies. Martial art and philosophical self studies had completely occupied his time and destiny had brought him a perfect mentor: Pham Zui Zui — Master in Vietnamese Martial Arts, president of the Eastern Martial Arts Academy and and a source of true wisdom. It is he who had made Konstantin a Master in Martial Arts and had introduced him to the Dao teachings and it’s source – The “I Ching” book.

An exposition on a cart

The location of one of the very first exhibitions of Konstantin’s art was at the Club House of the state factory where he was employed at the time as a metalworker. Prior to getting a permit to exhibit artist was forced to obtain a notice from the local art college stating that he is indeed a “good” artist — no more no less. After a small monetary reward such notice was received and Skoptsov proceeded to displaying his works.

Visitors were enjoying his illustrations to the jewels of literature such as “ Strange Tale from Liaozhai” by Pu Songling, “The Well of Saint Clare” by Anatole France and short stories by Aleksander Grin, and a few artworks illustrating Bible. Nobody would notice the religiously themed pieces if not for a Christian pastor, who was a member of an international visiting delegation from Scandinavia and had brought the fact to the administration’s attention. That same day the entire exhibition was taken down as it ran afoul of the Party’s directive to fight “God Seeking and Mysticism in Art.” Konstantin had to bring a cart to get his art loaded and removed from the premises.

Konstantin and his unique style

Overtime Skoptsov began to study German Medieval Philosophy and started to develop his own style – Semantic Realism. Artist uses this style to illustrate best european philosophical minds and literary masters such as Shakespear and Dante Alighieri and receives a recognition award by Sovereign Military Hospitaller Order of Saint John for his illustrations. Fame had followed soon after — a number of Konstantin’s artworks were sold prior to the official exhibitions openings for large amounts.

What is so appealing in artist’s mysterious, filled with symbolism and allegories creations? They are outside of streamline art, and surely are out of the ordinary. Someone who is familiar with the symbolism can take a notice of the familiar concept and will let the eye to keep searching the piece, discovering deeper meanings as time is spent studying the artwork. Skoptsov’s pieces are meant to be unraveled, and studied and are impossible to absorb with the simple passing by. Businessmen and collectors who patron his art notice an interesting fact: art, decorating their studies and libraries walls, helps to concentrate the flow of thought and inspires, bringing fresh ideas to mind.To experience Konstantin Skoptsov’s artworks in person and to invest into a piece please visit artist’s website: https://konstantin-skoptsov.com