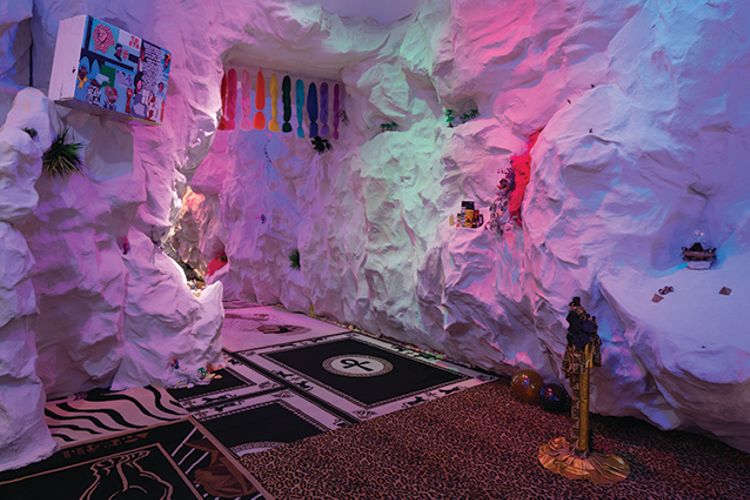 
Lauren Halsey’s We still here, there, at the Museum of Contemporary Art, Los Angeles, in 2018
Zak Kelley


Lauren Halsey, the winner of this year’s Frieze Artist Award, was born and raised in Los Angeles, and much of her work explores community building in an urban environment. The award, which goes to an emerging artist and is supported by the Luma Foundation, provides her with a budget of up to $25,000 to make a work of art for the New York fair. Halsey’s project is an architectural installation dedicated to Nipsey Hussle, the rapper and activist who was gunned down in Los Angeles on 31 March. Visitors will be invited to move around two columns whose surfaces offer tributes to Hussle as well as images of hair models, ideological pyramids, Afrofuturist myths and ephemera from South Central, the neighbourhood in which the artist grew up. We talked to Halsey about her passion for South Central, her evolving aesthetic and her fascination with pharaonic architecture.

The Art Newspaper: Tell us about your installation for Frieze New York

Lauren Halsey: I’ve always been interested in making columns that would sort of function as another archetype for, I guess, a remix of the pharaonic architecture I’ve been investigating in my practice via the hieroglyphic form, engravings, sphinx figures as sculptures, and so now also the column. I’ve referenced the column a couple times before in my practice—in I think 2014 and most recently in 2018—and those were mostly aesthetic columns: painted columns made out of cardboard. But with the Frieze project I’m making the jump to architectural, almost structural columns, which is really exciting for me. Gearing up for the column carving process, there was a lot of running around LA, meeting fabricators who deal with columns, and finding the perfect custom surface to carve into, and that was an amazing learning curve in itself. For the Frieze project, I’m creating two 12ft tall, 2ft-in-diameter columns that describe ephemera, iconography, symbols, text and portraiture that I gather and sample in Los Angeles.


What issues would you say the installation explores?

It’s always the same with me: ways that I can think about ideas around freedom, liberation, via structure and space-making. So these columns are prototypes for larger columns I intend to build and have cast in concrete, permanently, in my neighbourhood. And so, for me, they’re markers or moments of aspirational messaging.

After studying at the California Institute of the Arts, you earned your master of fine arts degree at Yale, and then were an artist in residence at the Studio Museum of Harlem before heading back to Los Angeles. Is there a distinction between art that’s created in New York and on the West Coast?

My move back to LA had everything to do with scale. The Studio Museum programme allowed me to maintain my scale of these maximalist structures and sculptures. I wanted to continue on that sort of path—to continue exploring that ethos of building big and building with people—and so I immediately knew that I had to come to Los Angeles to fulfil that goal. It’s very easy for me to be in Los Angeles, making big work, because I’m able to operate and function in a million people’s backyards. I’m able to have multiple studios at once. Whereas if I was in New York attempting that work, I would still be in miniature mode—almost making models that were surrogates for the real thing because of limitations.

In a recent installation at the Museum of Contemporary Art in Los Angeles, you built a really immersive space: a system of caves that viewers were invited to linger in. Was this meant to evoke anything in particular?

When I initially made the cave, I was thinking about the cave as we know it as a warehouse for culture, for people, their stuff, their records, their paintings, their sculptures, their furniture. I thought the cave could function as this resilient space that held these gorgeous moments: content, from signage to cookbooks to audio, to figurines, knickknacks from the 99-cent store or discount stores, to describe a potential South Central LA future.

I was there every two weeks, live, in the space, adding to it, taking away. The best part was interacting with people pretty naturally.

You obviously have a commitment to South Central. Tell us about your childhood

I feel like I inherited a lot of neighbourhood pride and love pretty naturally, from my family, who have been here for multiple generations. My childhood there was wonderful. It was fantastic. I grew up on a street where a million kids played outside, where everyone is best friends; fast-forward to now and a few of them actually build my work with me, and we’re studio mates. As far as my childhood here, it was a lot of basketball, it was a lot of ice cream trucks, bike riding, summer camps, freedom, fun, playing tennis in the street, thinking we’re Serena and Venus Williams. It was beautiful.

Is the neighbourhood changing?

Yeah, as is everywhere else. Displacement is happening, and people are being moved around and making new migrations within the city. My commitment to this place—outside of loving it aesthetically and loving the people there—is that I look forward to one day owning property there, and having a stake and a say in who and what is building up structure. I guess I always want to be in conversation with the future of South Central. And it takes money and ownership to do that, or else you’ll be shuffled around forever.

Your work blends historic architectural forms, like an Egyptian temple or a grotto, with contemporary references. Do you feel a specific connection to the pyramids or any other elements of Egyptian culture?

My dream is to go see the pyramids. I inherited myths around ancient Egypt in a few ways. My father is a pretty deep student of certain dynasties within ancient Egypt so, as a kid, pretty naturally, when I was in the kitchen getting a popsicle and he’s cooking or coming into the house, or at halftime during the football game, he’s relaying information to me and my mother and my brother about Pharaoh such-and-such. Then there was Parliament-Funkadelic, who appropriated ancient Egypt as a site for black genius, black science, black fantasy, in their albums, and I’m a huge fan of them and their cosmology. Then there were people like Sun Ra and people that I was meeting in real life, in Los Angeles and in Harlem, who were taking it to a whole other level, where they never lived outside of the myths of ancient Egypt. I started thinking about the function of the hieroglyphs as this permanent record of the pharaoh’s world, as told by the scribes, and I thought it would be interesting to appropriate or remix the function of the hieroglyphs to describe entire communities and people.

In your installation for the Hammer Museum, you created a prototype for what you call The Crenshaw District Hieroglyph Project, which, when completed, will be realised in a public space on LA’s Crenshaw Boulevard. You inscribed every panel on the main structure with references to the South Central community, like local landmarks, signage and so on. Do these inscriptions relate to the present or the past?

Oh, both, for sure. What’s super-exciting for me is that I’m going to, for the first time, invite the public to engrave the panels, contributing text, images, narratives, so that the final form isn’t me as the scribe or this pharaoh figure, describing South Central to South Central; it’s this collective record, where we’re all authoring narratives, stories, past, future, present, together. What’s amazing about that is there are so many golden eras in LA that I just missed because I wasn’t alive, and I’ll see them in images of my grandparents hanging out, when they were 20, 21. I’m thinking about Central Avenue, and how that was a jazz mecca in LA, and so my goal is to meet with as many archivists as I can to tap into these images as well as people who actually experienced it and are still alive, so that it is this true record of past, present, future.

Are any of your projects intended as a call to action?

Not in a heavy-handed way, but I hope it inspires people and energises them.