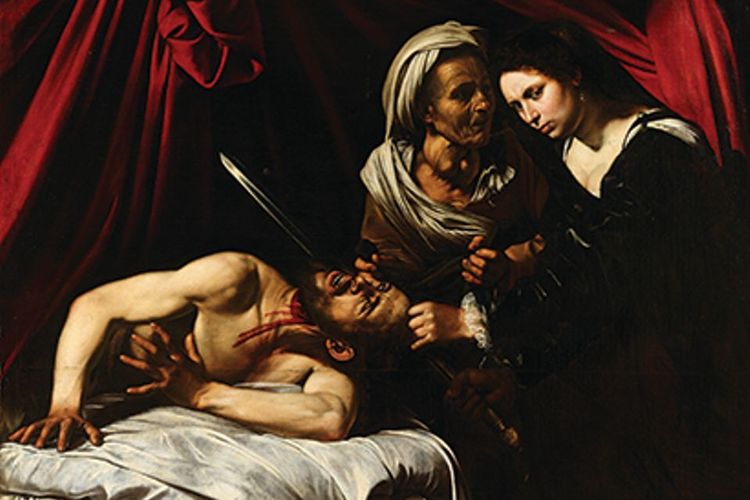 When I previously wrote about the 2014 discovery of a painting of Judith and Holofernes based on the iconic 1600 work by Caravaggio that hangs in Palazzo Barberini in Rome, my first thought was: “There ain’t no way that’s a Caravaggio”. This was based on the initial information released and pictures of the painting before it was cleaned.

On 27 June, this work will be auctioned off, and much more information has been made available about it in large part due to a major academic conference held to discuss the work’s authorship, as well as a marketing campaign to promote the work in anticipation of its sale. My opinion has shifted away from “Ain’t no way” and into the wavering zone of “I’m not sure”.

That probably sounds uselessly indecisive, but that’s the stance of most scholars when it comes to this painting. Most initially had the same sort of reaction that I did, and many are also now uncertain. But one thing that has gone unnoticed is that, whether this is a second version of the theme by Caravaggio—as the owner very much hopes—or an extremely high-quality copy by one of his followers, it is a major discovery of a lost work either way.


Judith and Holofernes was rediscovered in a French farmhouse
Cabinet Turquin


The painting was found in a leaky attic in Toulouse, France, by the local auctioneer Marc Labarbe, who had been slowly selling off the contents of the home. He called in Eric Turquin, an expert in Old Master paintings, whose firm helped research the piece and enforce the optimistic authorship. The painting will be sold in Toulouse but has been put on display in London and Paris to stoke curiosity and interest. The auctioneers are hoping to net between £86m and £129m, and are starting the sale at £30m.

The most important question to see off the board before moving forward is whether this might be a forgery. The evidence released to date, which includes various scientific examinations, suffices to determine that it is not. Scholars believe it an authentically historic painting that was most likely made in 1607.

As I discuss in my book, Caravaggio painted around 40 works. But, depending on which scholar you consult, the number of lost works by the artist runs from 8 to 115. Is this one of those lost works, or one of scores of excellent paintings by those inspired by Caravaggio? There are arguments for and against the attribution, and often the case for Caravaggio includes elements that offer a counter-argument.

Caravaggio made copies or slightly different versions of the same subject on several occasions (consider his David and Goliath or Supper at Emmaus). There is a historical record of a copy having been made by Caravaggio of his Judith and Holofernes, which now hangs in the Palazzo Barberini in Rome, and that version has been lost. So, there is indeed a possibility this might be it.


A real Caravaggio, Judith Beheading Holofernes, made around 1600

X-rays of the picture reveal alternate placements of the figures beneath the surface layer of paint, showing that changes were made in the painting process. That demonstrates that this is not a direct copy of another picture because there would be no changes made to the composition if it were simply being copied. However, it does not discount the possibility that this is a work inspired by Caravaggio’s Palazzo Barberini Judith and Holofernes and altered slightly by the artist.

A handful of respected experts have thrown in on the side of the owner and stated that they believe it is a work by Caravaggio. Other equally respected experts have said it is not, and two have gone so far as to say that they know the real artist, a Flemish Caravaggisti called Louis Finson. The Pinacoteca di Brera in Milan hosted a symposium in November 2016, but the various international scholars could not reach a consensus. This is no surprise, since that has been the case with just about every work of note in history.


France put a blockade on selling the painting abroad for 30 months by declaring it a “national treasure”, which would seem to make a pretty solid argument that it must be the real deal. However, it would have been reckless for France to risk losing the painting to a quick sale, and it bought time to do proper research and determine the authorship. It also gave French institutions the exclusive right to buy the work within the timeframe, to keep it in the country. None chose to make a competitive offer to do so, which is a case against. There are some very wealthy institutions and individuals in France, and, if the painting were as exciting as it seems, then surely one of them would have seized the opportunity to acquire it. The Louvre examined the painting but did not go public with their determination of whether it is by Caravaggio or not. The shadow of doubt must have been too long—or the asking price unreasonably high.

What is certain is that enough hype has surrounded the discovery and the forthcoming sale, and enough evidence—modestly empirical and more impressively opinion-based—has come to light to encourage an enthusiastic auction. It is no slam-dunk. The now oddly missing in action Salvator Mundi was largely accepted as by Leonardo. But the chance to own a lost Caravaggio could be worth the risk that it is by one of his followers. And as long as enough scholars believe it to be an original, then it will enter the historical records as a lost and found work by one of art history’s greatest revolutionaries.

• Noah Charney is an author and art history professor at the ARCA Postgraduate Program in Art Crime and Cultural Heritage Protection. His new book is Museum of Lost Art, published by Phaidon

Fluxus in the air: Doug Aitken’s hot air balloon sails above Massachusetts
Marc Quinn will display the blood of refugees and celebrities
To Top
error: Content is protected !!
Top