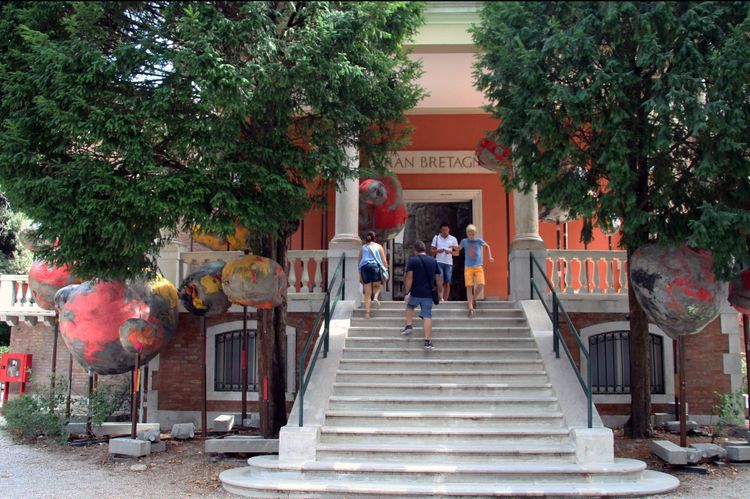 Cathy Wilkes is known for her intricate mysterious tableaux that feature arrangements of sombre spectral figures set among objects salvaged from everyday life. For her British Pavilion presentation, the Belfast-born, Glasgow-based artist has produced an entirely new body of work to fill each of the building’s six spaces with evocative environments that are also meant to be viewed as an unfolding progression that flows from room to room. “It feels like one big work,” says Emma Dexter, the British Council’s director of visual arts, who adds that “an important theme in the show is one of dormancy, of something waiting to come to life beneath the surface. It’s very much about a circle of life and death.”

Wilkes’s protagonists are almost faceless, with only the most schematic suggestion of features. These forlorn presences occupy a world in which colours are sombre and muted, and where many of the elements that accompany them—whether textiles, ceramics or a range of commonplace household objects—seem either heavily worn from repeated use or to have fallen into a state of decay. Exactly what is taking place between all these carefully composed components is left deliberately ambiguous; there is no single reading.

Hanging on the walls is a new series of abstract paintings that mirror the intensive labour that goes into Wilkes’s three-dimensional work. On each canvas, multiple accretions of pigment are repeatedly washed away, re-applied and then removed again, leaving bleached-out traces and stains, suggesting many layers of thought, memory and meaning. The pavilion has also been modified so that all its spaces are bathed in subdued, evenly distributed natural light, further adding to an atmosphere of hushed anticipation. Amid the background noise of the Biennale, the British Pavilion promises to be a place for contemplative reflection.

The moving image has been at the core of Charlotte Prodger’s practice for more than two decades. SaF05 (2019), her new 45-minute video made for the Venice Biennale, is the third part of a single-channel video trilogy that began with Stoneymollan Trail (2015) and was followed by BRIDGIT (2016). The two earlier films presented a multilayered accumulation of people, places and things, all closely informed by Prodger’s personal experience; and SaF05 continues her richly metaphorical investigation into queerness, subjectivity and self-determination. “This work is Charlotte’s most intimately autobiographical to date and is certainly her most ambitious single-channel video, both in terms of technical complexity and the international nature of some key shoots,” says Linsey Young, the commissioner and curator of the Scottish Pavilion.

Prodger’s new video was shot in a number of locations, including the Okavango Delta in Botswana, the Inner Hebrides off the coast of mainland Scotland and Greece’s Ionian Islands. “Growing up in the rural, agricultural environment of Aberdeenshire, I understand landscape and queerness as inherently linked,” the artist says. “And as someone who identifies as queer, I’m excited by the fluid borders of identity—especially the perceived edges of gender and geography.”

Unlike BRIDGIT, which was filmed entirely on an iPhone, here she has used a range of equipment. Footage shot on her iPhone (an object that the artist has previously described as functioning like a prosthetic device) is combined with archive material, as well as imagery shot on high-spec HD digital cameras and footage captured by a drone. There is also a voiceover in which Prodger speaks in the first person (unlike her previous work in which she mixed her voice with that of others), but this does not mean the words are necessarily her own.

The utilitarian setting of the Scottish Pavilion, which is situated among the workshops of the Arsenale Docks boatyard, has also been treated as a sculptural element in its own right. Existing architectural features have been subtly pared back or painted to emphasise their minimal, industrial qualities, and the old boatyard shed now houses a pristine high-spec viewing chamber that has been furnished with benches made from Douglas fir.

Prodger’s underlying theme that every aspect of identity is fluid and mutable is also referenced in the title of her piece for Venice. SaF05 refers to the name researchers have given to a lioness in Botswana who, along with several others on the same reserve, inexplicably displays male characteristics and behaviour, such as having a mane, being larger in size than an average lioness, and showing an interest in mounting other females. The fact that the lion of St Mark’s Basilica is the ubiquitous symbol of Venice may be a coincidence, but it is a happy one.

Sean Edwards uses a multiplicity of media to express the sculptural potential of the everyday. His exhibition for the Welsh Pavilion includes new sculpture, film, prints and quilts, all of which are informed by his personal history of growing up in the 1980s in a single-parent family on a council estate in Cardiff. “The overall theme is the idea of not expecting much,” he says. “People talk about a working-class voice in terms of film or literature, and I was thinking, ‘What does that mean for the visual arts?’ I think the nature of my work has been to find a visual language for this.”

Edwards’s previous explorations of the subject have included an entire exhibition based on a Brutalist shopping centre near where he grew up, pieces made from neatly folded plastic supermarket bags, and works that feature repetitive patterns made from the cut-out letters from the mastheads of tabloid newspapers. The latter are revisited in his Welsh Pavilion show, but this time the abstracted images of Sun and Mirror mastheads have been stitched into the surface of monochrome Welsh wholecloth quilts. This adds a contemporary twist to traditional objects which Edwards feels have a close relationship to his practice and making, both in their regional and political associations as well as in their relationship to the everyday.

Another important departure in his Welsh Pavilion presentation is a time-based sound piece that takes the form of a 25-minute radio play performed daily by his mother and produced in association with National Theatre Wales. Refrain draws on fiction, found material and personal experience, and is broadcast daily throughout the Biennale directly from his mother’s flat in Cardiff. Edwards was raised a Catholic, and his mother grew up in a Catholic children’s home, so the fact that the Welsh Pavilion is in the Church of Santa Maria Ausiliatrice and the rooms of its former convent (now a school) is significant for the artist. The schoolrooms that contain his work have been left in their original, institutional state as much as possible, and the daily sound of Refrain also acts as an echo of the daily masses that previously reverberated through the space.

Curator will plant 299 trees in Austrian football stadium in statement against climate change
Exhibitions during the Venice Biennale: a festival of painting
To Top
error: Content is protected !!
Top