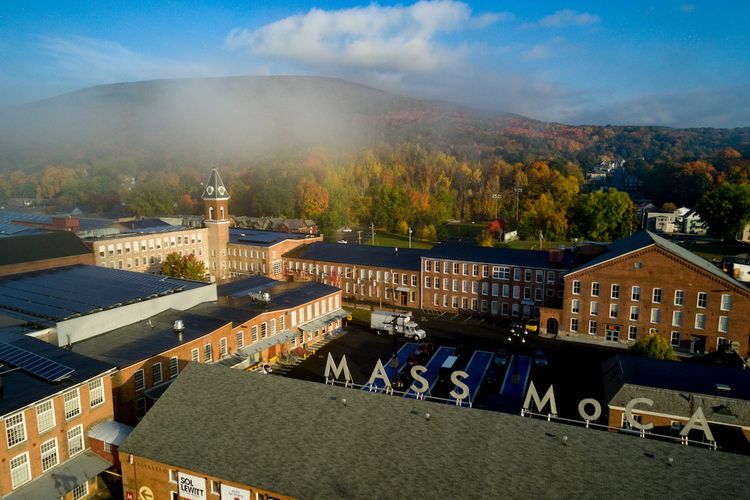 The Massachusetts Museum of Contemporary Art (Mass Moca) in North Adams celebrates its 20th anniversary this week. The project was once inconceivable, then impossible, then nearly fatally broke, and now is thriving.

The museum began with a catastrophe, when in 1985 the Sprague Electric Company—a leading maker of transistors, circuits, and rocket innards—shut down, leaving more than 3,000 workers unemployed and its vast campus of 26 industrial buildings empty. This caused unemployment in the rural northwestern Massachusetts region to approach nearly 20%.

I know because I was there. My parents owned a small farm in Stamford, Vermont, about five miles from Sprague. I studied at Williams, and I was a curator until 2004 at the Clark Art Institute. I lived in North Adams and am now back in Vermont and see many of Mass Moca’s shows.

Mass Moca—at least the initial idea—was the vision of the curator Thomas Krens, who taught at the nearby Williams College and directed its museum before going on to lead the Solomon R. Guggenheim Museum in New York. During his time at Williams, the building was expanded by the architect Charles Moore—but the project was so bungled by a cost-conscious university president that it was already too small the day it opened. Moore refused to attend the opening and Krens started to dream of the empty 800,000 sq foot tomb in North Adams.

John Barrett, the mayor of North Adams knew next to nothing about contemporary art, was inclined to view artists as crazies, but was still willing to jump out of a plane using a parachute packed by eggheads with Williams degrees

Launching Mass Moca entailed a massive, ongoing architectural retrofit. The campus is a maze but not an incoherent one. When Sprague was there, it functioned as a watch with intricate, different, but complementary parts. For Mass Moca, it is both a challenge and an opportunity. Few of the galleries are the clean, white boxes we expect in contemporary art museums. Much of the brick and concrete is exposed, reinforcing the sense both of a raw urban environment and an unpolished, lean and mean start-up.

In the early 1980s, everyone thought the museum should, must, and would elide into a conventional art museum. It has, but only with respect to its exhibitions, with many new commissions of immense scale and ambition. It does great temporary shows, as do many museums, but their size and the focus on new commissions is unusual. So is the number in each of the museum’s cycles, with up to a dozen new shows on at any given time, big and small.

My favourites include Ann Hamilton’s 2004 show, Corpus, set in the museum’s largest gallery, which is only a tad smaller than a football field. The space’s 3,500 spaces were draped in red silk organza, the sun bathing the gallery in a soft crimson. It felt like a cathedral. Above, 40 mechanized dispensers dropped single sheets of onion skin paper, which fell like leaves. The visitor moved at his or her own pace, some shuffling, some kicking, as if moving through clouds.

Others include Xu Bing’s Phoenix (2008-10) in 2014, a dinosaur-like sculpture made from construction debris from sites in China, and Tanja Hollander’s Are You Really My Friend (2017), where she photographed all 626 of her Facebook friends in their homes. Hollander’s best expressed Mass Moca’s brand of creative, fresh, stylish and unconventional displays.

The museum does not collect, which is another break from the institutional norm. It has some long-term installations, such Sol LeWitt’s dedicated wall-drawing retrospective that has an astounding 40-year run (it remains up until 2043). Only Mass Moca had the space and entrepreneurial spunk to do it. This show and others by James Turrell, Jenny Holzer, Laurie Anderson, and Anselm Kiefer alone make it a destination.

Mass Moca is a generational adventure

Mass Moca is an anomaly in another respect: the museum has 37 commercial tenants that now generate $50m in economic activity for the region annually. The commercial rents are an essential part of the museum’s financial model. This hybrid use of space will—and should—inform future museum expansions.

Mass Moca is also different in the role performing arts play in its programming. Around half the museum’s resources go to dance, theatre, film, concerts and festivals. Of the museum’s 300,000 annual visitors, around a third come for the performing arts. Patti Smith, The Builder’s Association, Bill T. Jones, and Basil Twist are among the stars appearing there. Few museums truly integrate the performing arts with the visual arts, although almost all great artists have been passionately engaged with the music and theatre of their times. Though this seems like a no-brainer, so thorough and organically united a programme is rare.

These events generate income from ticket admissions but, but they also engage rich donors from throughout Berkshire County, who historically support the performing arts at places like Tanglewood, Jacob’s Pillow, and the Williamstown Theater Festival. Mass Moca was able to piggy back on the county’s already established renown for such work and the deep pockets—and crowds—that go with it.

Can Mass Moca be replicated? One of the critical ingredients was the intellectual milieu at Williams College, which may or may not have been unique. From the 1940s to the 1990s, Williams was an art history powerhouse specialising less in hard academics but more on the pleasure of connoisseurship and looking, and the limitless capacity of art to provide meaning. Everyone from Williams involved in Mass Moca in its early days had professors that made art history engaging and fun. Their egalitarianism meant they saw a museum as a total experience open to everyone—immersive, welcoming and appealing to almost every taste.

Williams also supplied a big chunk of Mass Moca’s donor pool and trustees. At a critical moment in 2007, when it did teeter on the abyss of failure, they were there, financially, to pull the place back into the financially stability it has today, with a balanced budget and $25m endowment.

The project was once inconceivable, then impossible, then nearly fatally broke, and now is thriving.

Leadership also matters. Essential was the tenacity and political smarts of John Barrett, the mayor of North Adams from 1983-2007. Barrett was the longest serving mayor in Massachusetts and a canny, conniving potentate. He cracked the many eggs that made this particular gourmet omelette. He was a political master but also a man of faith and daring. He knew next to nothing about contemporary art, was inclined to view artists as crazies, but was still willing to jump out of a plane using a parachute packed by eggheads with Williams degrees.

The man of the moment is Joseph Thompson, the founding director, who is still leading the museum after 32 years. Sometimes people need to give their lives for a cause. For Thompson, there were many Monday mornings that began with a cup of coffee and the question: “Will we go bankrupt this week?” Thompson is among the world’s sunniest optimists, not a fantasist but a man who sees the future, likes what he sees and can artfully crawl over molten glass to get there. That he is a risk-taker par excellence with a passion for new ideas does not hurt, either. “Mass Moca is a generational adventure”, Thompson says. “Whatever the world’s most creative human souls might conceive in the next 20 years, Mass Moca will be their platform”.