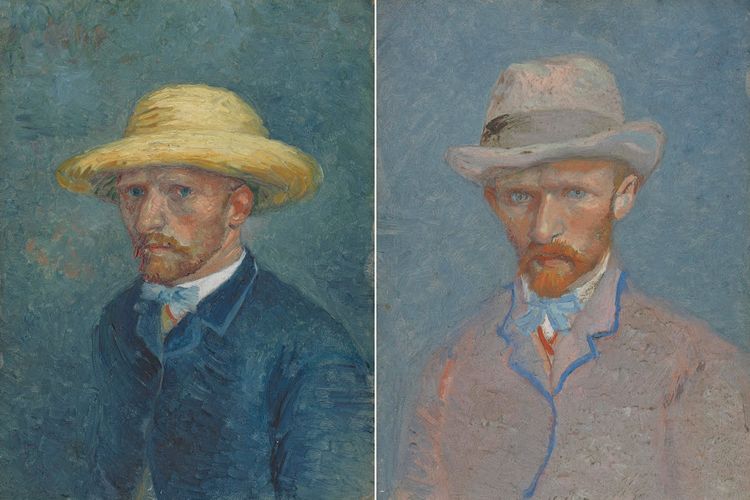 A pair of portraits at Amsterdam’s Van Gogh Museum depicting Vincent and his brother Theo are the subject of a continuing identity debate. Painted in 1887, when Vincent was living in Montmartre with his brother Theo, both small pictures were long assumed to be self-portraits, with Vincent wearing two different hats. Then, eight years ago, the museum determined that the man with the felt hat was Vincent and the one with a straw hat was Theo.

The Art Newspaper can report that this theory will be challenged in an exhibition which opens in the autumn at the Noordbrabants Museum in s’Hertogenbosch (Den Bosch) in the Netherlands, Van Gogh’s Inner Circle: Friends, Family, Models (21 September-12 January 2020). Its guest curator, Sjraar van Heugten, knows the pair of portraits well, as an ex-head of collections at the Van Gogh Museum. Now an independent scholar, Van Heugten believes that his colleague has it the wrong way round. He argues that the man in the straw hat is Vincent and the one in the felt hat is Theo.

When the sitters’ identities were first challenged in 2011, it came as a considerable surprise. Vincent, a notoriously casual dresser, might have been expected to sport a straw hat, which would be comfortable for painting outside. Theo, a respectable art dealer, would surely have worn a more formal felt hat. Indeed, when Vincent was in Paris he apparently did not even own a felt hat, according to Theo’s brother-in-law.


The Amsterdam museum’s explanation eight years ago was that the two men had swapped hats, probably as “a joke”. Louis van Tilborgh, its senior researcher and a distinguished specialist on the artist’s Paris period, suggested that Vincent was playing on the fact that he often depicted himself in self-portraits with a straw hat. Exchanging hats with Theo was therefore a family jest. “It very much looks as if the brothers are wearing each other’s hats,” he concluded.


Van Tilborgh’s main evidence for determining that the man in the straw hat is Theo is the physical characteristics of the face. He pointed to the colour and shape of the beard, which is ochre (rather than the orange-red of Vincent), and it was respectably trimmed, rather than in Vincent’s more unkept style. The ear is also rounded, as in photographs of Theo, while Vincent’s other self-portraits suggest he had more fleshy ears.

But Van Heugten tells The Art Newspaper: “It is unlikely that Vincent would have depicted Theo in rather nonchalant summer attire and himself dressed as a respectable gentleman.” He says that Theo had light grey-blue eyes, while Vincent’s self-portraits suggest that he had greenish eyes (Vincent’s were often portrayed as green, sometimes bluish, sometimes dark, but never greyish-blue as in the man with the felt hat). Another accepted self-portrait with a straw hat clearly shows Vincent with a green pupil (with blue in the rest of his other eye).


The Van Gogh Museum now concedes that Van Heugten may possibly be correct about the man with the straw hat, and it has given the picture a new title: Self-portrait or Portrait of Theo van Gogh. A statement published yesterday says: “In light of the fact that we are dealing with painted portraits and not photographs, it remains difficult to effectively weigh up arguments regarding physical similarities; after all, there are any number of reasons why the artist may have deviated from reality.” With this uncertainty, the museum has taken the unusual step of giving the painting a double title.

But disagreement still remains about the other portrait—the one with the felt hat. The Van Gogh Museum believes that it is a self-portrait, since it is so similar to another fully-accepted self-portrait in the Rijksmuseum.


The Noordbrabants Museum disagrees about the Van Gogh Museum’s portrait with the felt hat. In their exhibition, it will be displayed as Portrait of Theo van Gogh. With the two pictures with their different headgear hanging beside each other, visitors and scholars will have the opportunity to decide for themselves. No other Van Gogh portraits of Theo are known, so it is important to sort out which of the pair represents the artist’s younger brother. The difficulty is that the two brothers did look so alike.

The debate over the pair of paintings has echoes of a similar issue over a photograph. Until last November a photograph of a boy was always thought to be of Vincent, aged 13. Fresh research shows that it is in fact Theo, at 15.

Since Theo played such an important role in Vincent’s life, it is fascinating to know how he was portrayed by the artist. After the Noordbrabants exhibition the pair of paintings will return to the Van Gogh Museum where, as usual, they will be hung next to each other.

• Martin Bailey writes a weekly blog Adventures with Van Gogh, which returns after a summer break on 6 September