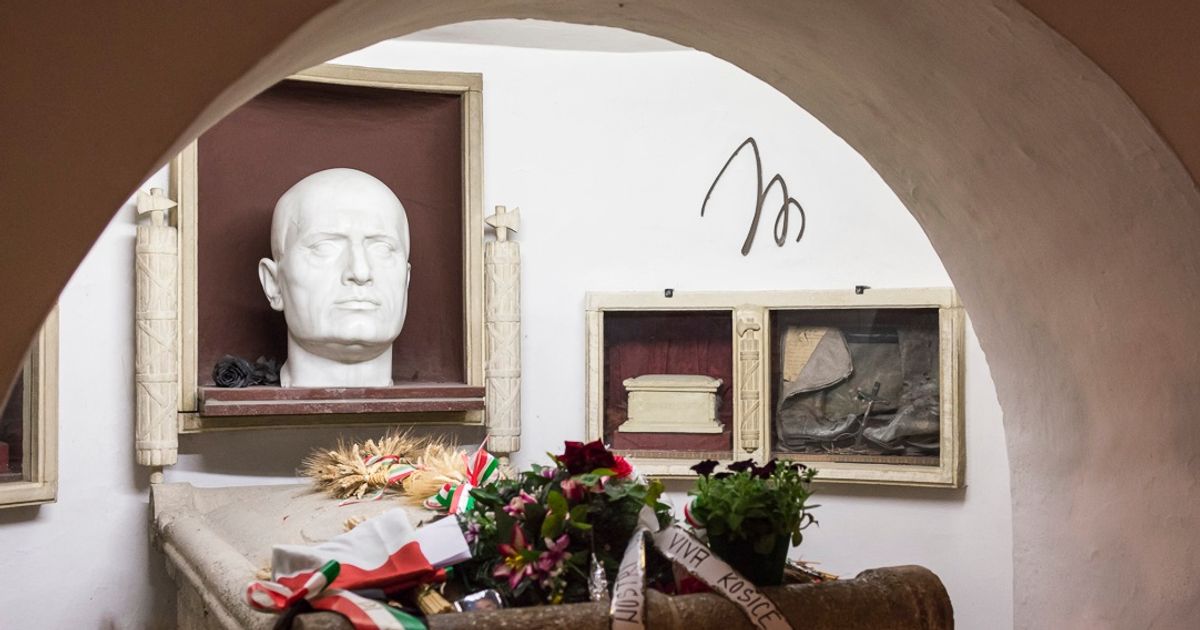 The crypt of Benito Mussolini has reopened to the public

Following a four year restoration, Benito Mussolini’s crypt was reopened last month amid a family feud. A ferocious war of words between the former Italian dictator’s descendants has revealed deep divisions within the Mussolini clan over the crypt’s fate, and has reignited a national debate over whether the controversial site should be visitable at all.A re-inauguration ceremony on 23 May was reportedly attended by dozens of visitors and presided over by the sisters Orsola and Vittoria Mussolini, great-grandchildren of the dictator. While the site had been opened only occasionally since the start of the €100,000 renovation, now it can be accessed on a daily basis. Located in Mussolini’s birth town of Predappio, the crypt houses the dictator’s remains, which were relocated there in 1957, alongside those of 13 family members. It has become a shrine for bus loads of neo-fascists, who often don black shirts and the dictator’s favoured fez cap, with annual visitors having reached 100,000 before the site was closed in 2017.

Orsola and Vittoria Mussolini announced they would reopen the crypt on 20 May, before Rachele Mussolini, another descendent who is a Rome city councilor for the hard-right party Fratelli d’Italia, wrote on Facebook that the reports were “baseless”. Signed “the Mussolini family”, the post indicated that the site would “remain closed”. Nevertheless, Orsola and Vittoria Mussolini pushed on with their plans but discovered that the locks on the doors of the crypt had been changed. On 22 May the sisters, accompanied by a blacksmith and members of Italy’s gendarmerie, forced open the doors. While reasons for part of the family’s objection are murky, financial interests could be at play. Last July, the Mussolini family requested via its lawyer that the town council “proceed with reopening the Mussolini crypt on a daily basis”. By attempting to block the reopening, Rachele Mussolini’s camp may be pressuring the council into paying for the site’s upkeep, a senior journalist for local newspaper Il Resto del Carlino, who wishes to remain anoymous, told The Art Newspaper. The crypt has long been an object of political contention. Left-wing activists blew up the entrance with plastic explosives in 1971, before items including the dictator’s military caps and an urn containing a fragment of his brain were stolen from within five years later. The recent renovation was funded by the Fondazione Alleanza Nazionale, an organisation which aims to protect the “political heritage […] of right-wing Italian history,” according to its website. Roberto Canali, the right-wing mayor of Predappio, has consistently argued that the crypt will draw tourism to the town. But Gianfranco Miro Gori, a local president of the ANPI antifascist association, has warned against the site becoming a “mausoleum of fascism”. “We are talking about a racist dictator who dragged Italy into a war and had tens of thousands of Italians killed,” Miro Gori told La Repubblica. Members of the Mussolini family had not responded to interview requests at the time of publication.