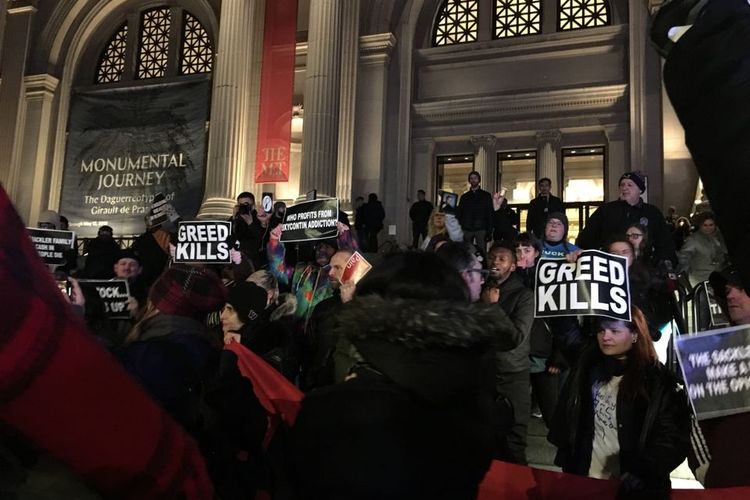 
Protesters in Nan Goldin’s activist group PAIN at a demonstration at the Metropolitan Museum of Art earlier this year.
Gabriella Angeleti


The artist Nan Goldin and 12 other members of a group that is waging a protest campaign over the US opioid crisis were arrested today during a demonstration in front of Governor Andrew M. Cuomo’s office in New York City, the police said.

The chanting, sign-waving group was detained around noon and charged with disorderly conduct, said a police spokesman, Detective Martin Brown. He said that the protesters had been asked to disperse but had refused to do so.

Activists in the group, Prescription Addiction Intervention Now, or PAIN, were accusing Cuomo of failing to take adequate steps to brake the wave of opioid deaths in New York State.

PAIN is better known for the protests it has staged at museums that have accepted funding from benefactors in the Sackler family, which controls the opioid drug manufacturer Purdue Pharma. Among the art institutions that have been targeted are the Metropolitan Museum of Art, the Solomon R. Guggenheim Museum, the Freer/Sackler and the Louvre.

ARTNews reported today that Goldin, who formed PAIN last year, could be seen at the protest this morning locking arms with other activists while sitting in front of the office building’s entrance with a sign that said, “Governor While You Wait New Yorkers Die”.

A spokesman at the New York Police Department’s Central Booking office said this evening that the protesters were still being processed and had not yet been released.

On Tuesday, it was reported that the Sacklers and Purdue Pharma are in discussions on a proposed multibillion-dollar settlement of over 2,000 federal and state lawsuits related to the US opioid epidemic. Under the proposed agreement, the Sacklers would reportedly yield control of the company.

Purdue Pharma is accused of aggressively marketing the painkiller OxyContin while playing down the risk that it will lead to opioid addiction.

Sacklers in talks over multibillion-dollar settlement of opioid crisis lawsuits
Philanthropy, but at what price? US museums wake up to public’s ethical concerns
To Top
error: Content is protected !!
Top