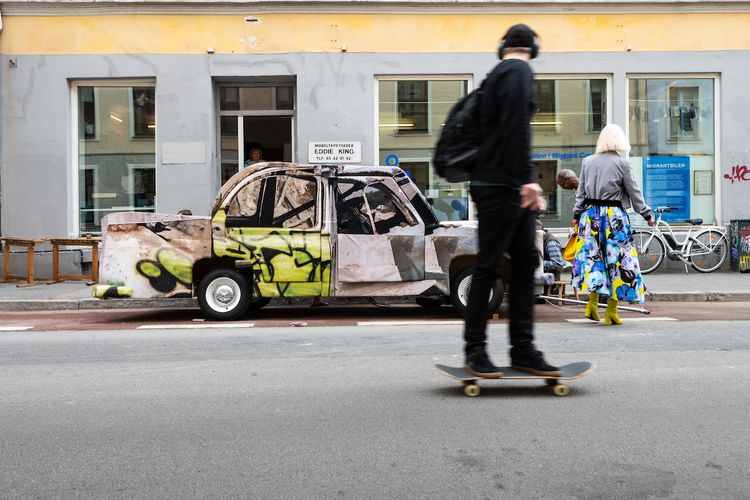 
The first edition of the Oslo Biennial opened yesterday with 17 public works of art installed throughout the city. The event, which will run for five years, aims to challenge the standard biennial format. It has no theme and receives no private funds, which organisers hope will make it stand out in terms of production and interaction with artists.

The biennial operates as part of Oslo’s arts budget and this year has received around NOK25m (around £2.2m). Artists have been given large studio spaces in the centre of Oslo, some that double as exhibition spaces. Its flexible in format, which could change from one year to the next, provides “a structure that allows both artists and audiences to experience public works of art in new ways because it goes beyond a standardised form”, says Per Gunnar Eeg-Tverbakk, who co-curated the biennial with Eva González-Sancho Bodero.

While Oslo is home to numerous commercial galleries, private museums, arts festivals and artist-run spaces, such as the Kunstnernes Hus, it lacks a public arts programme, a gap that the curators hope to fill. “We are using this format to push contemporary art into the city”, Eeg-Tverbakk says.

Among the highlights are the Norwegian artist Mette Edvardsen’s performance work Human Library, Time Has Fallen Asleep in the Afternoon Sunshine—A Library of Living Books (2010-ongoing), which features performers reciting pieces of English and German literature in 30-minute time slots. The work is inspired by Ray Bradbury’s Fahrenheit 451, in which memorising books is an act of defiance.

Other works include the British artist Ed D’Souza’s Migrant Car (2019)—a sculpture covered in a photograph of a crashed car in Delhi. The French artist Julien Bismuth’s Nothing is Small, Nothing is Big involves actors performing a series of works inspired by political theatre. Meanwhile, the Norwegian artist Øystein Wyller Oddens is presenting his sonic work Kraftbalanse, an experimental piano and string composition, in the Oslo City Hall.

The second stage of works in the biennial will open in October 2019 and include works by the artists Adrián Balseca, Marcelo Cidade, Jonas Dahlberg, Anna Daniell and Edith Dekyndt.