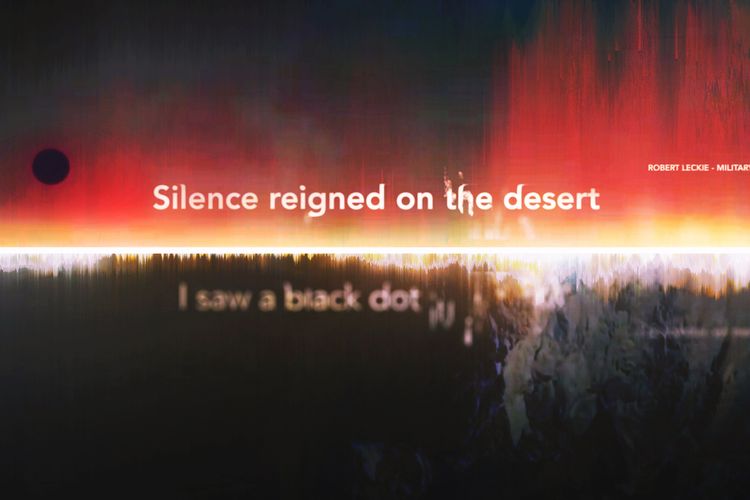 At 8:10am this morning, exactly 75 years since the Allied Forces dropped an atomic bomb on the Japanese city of Hiroshima, the London-based artist and stage designer Es Devlin unveiled her dramatic new digital artwork. I Saw the World End (2020), made in collaboration with her long term studio colleague Machiko Weston, consists of an illuminated “collective reading” of texts from a range of sources in Japanese and English. It was commissioned by the Imperial War Museum (IWM) in London to mark the 75th anniversary of the dropping of atomic bombs on Hiroshima and Nagasaki in the final days of the Second World War. The original plan had been to beam the work across the giant 45m electronic light screen at Piccadilly Circus. But out of respect for the suffering of the Lebanese people caused by the recent devastating explosion in Beirut, the screening was hastily relocated and I Saw the World End had its debut instead on a modest monitor in the upper atrium of the IWM.

However, despite the near 50-fold reduction in size, the dramatic impact of the work was, if anything, enhanced rather than diminished by what Devlin described as the “modesty and humility” of the new format and location. On a horizontally split TV screen, texts simultaneously projected and read by Devlin traced the development of the atomic bomb from the fiction of the writer HG Wells through to statements from physicists, historians and US presidents. At the same time, these were interspersed with survivor witness accounts from both Hiroshima and Nagasaki, which were displayed as texts and read aloud by Weston. The screen is split to “express the potential for division”, according to Devlin and Weston. “Splitting the screen, splitting the atom, the division between fiction and fact, race divisions, the division between humans and the planet.” The sight and sound of these often devastating accounts from two such different perspectives was also set to a rich score and crackling agitated visual effects. This was rendered all the more powerful in the knowledge that on display in a gallery just two floors below was one of the original casings made for the Hiroshima bomb, code-named Little Boy.

And further down in the museum’s atrium there are even more disconcertingly direct encounters with the world’s first atomic bombing, courtesy of another life-sized image of the atomic Little Boy as well as its more bulbous Nagasaki counterpart, code-named Fat Man. Cosily nicknamed and deceptively modest in size, these are just two of the 50 lethal missiles reproduced onto the atrium’s vinyl floor by Ai WeiWei for his work History of Bombs (2020), part of an exhibition of the same name, which was commissioned for the IWM’s season on refugees. There is something very unsettling about being able to stand upon, and inspect at close quarters, these agents of so much unimaginable destruction. This human cost is further emphasised by the nearby installation of the twisted rusted wreckage of a car destroyed in a street bombing in central Baghdad in 2007 and given to the museum by the artist Jeremy Deller after it had toured the US. As with Devlin and Weston’s new commission, here again an artist’s vision ensures that the lasting cultural and human consequences of these cataclysmic global events are brought into sharp relief.• I Saw the World End is viewable on the IMW’s website and Ai Wei Wei: History of Bombs is on view at the now opened IMW until 24 May 2021.