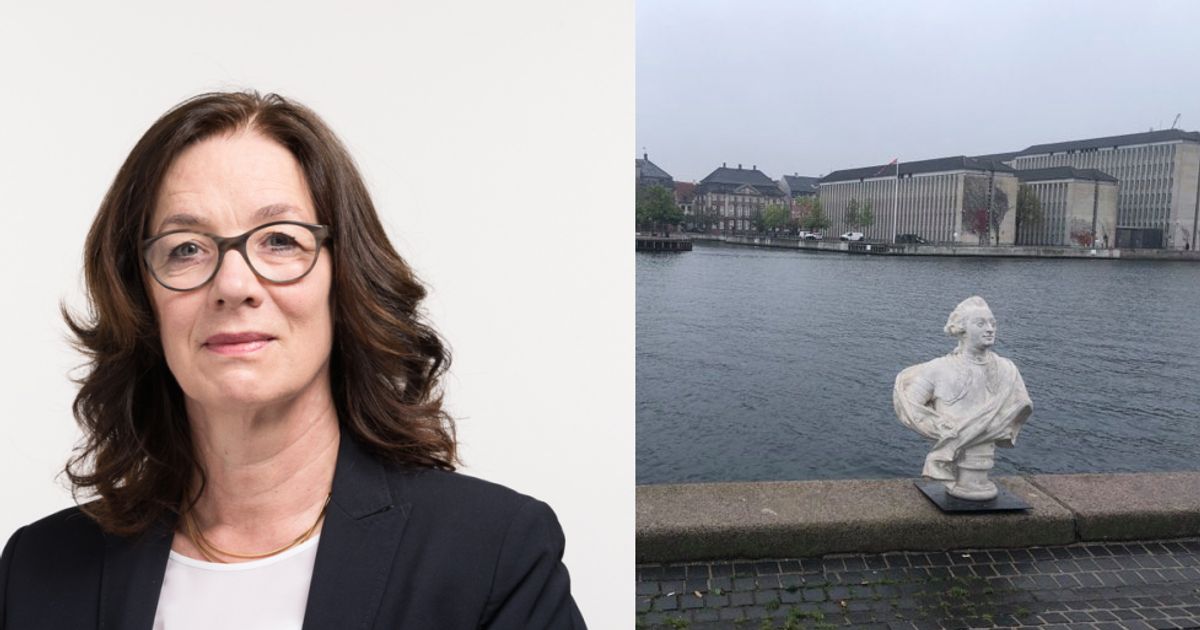 Kirsten Langkilde (left) was fired from her post at the Royal Danish Academy of Fine Arts, Copenhagen after a bust of Frederik V (right) was removed and thrown into the nearby canal

The controversy engulfing the Royal Danish Academy of Fine Arts in Copenhagen, Denmark’s most prestigious art school, over a dumped royal bust took a new turn last week when the college rector was forced to step down. Kirsten Langkilde resigned after the Danish culture ministry said “new powers” are needed at the academy. The move is the latest twist in a saga that began 6 November when a replica 1950s bust of the 18th-century monarch Frederik V displayed at the academy was removed and thrown into the nearby canal. According to Danish press, the collective known as Anonymous Visual Artists posted a video of the bust being thrown into the water. But artist Katrine Dirckinck-Holmfeld, a postdoctoral researcher at the Academy, later claimed responsibility, telling the newspaper Politiken: “It was me who took the initiative. It was me who took the bust from the plinth in the Academy’s ballroom. And it was me who pushed it into the port.” Frederik V, the ruler of Norway and Denmark in the mid 1700s, founded the art school. Dirckinck-Holmfeld said the “happening” was meant to spark debate about Denmark’s colonial legacy and its role in the slave trade; she was subsequently dismissed. Joy Mogensen, the Danish Minister of Culture, issued a statement saying that the ministry “had failed to reach an agreement over meeting the challenges at the [Academy]. New powers are therefore required. The Ministry of Culture and Kirsten Langkilde have agreed that [Langkilde] will resign from her position. Now we are giving the visual arts schools a new start with a new rector.” In a statement posted on the academy website last month before her resignation, Langkilde wrote: “One cannot claim to be above the law under the pretext of creating art. Theft and vandalism remain criminal acts, regardless of the context. I therefore strongly disapprove of Katrine Dirckinck-Holmfeld’s choices and actions in this matter.” She added: “The Academy is open to teachers and students of any political leanings, including, of course, identity-political attitudes. Thought policing will never become part of the admissions process at the Royal Danish Academy of Fine Arts. But it is equally clear that no matter how strong one’s convictions, it is not acceptable to use them to snub or ostracise others or try to suppress the free exchange of opinions.” Jes Gjørup has been appointed acting rector.