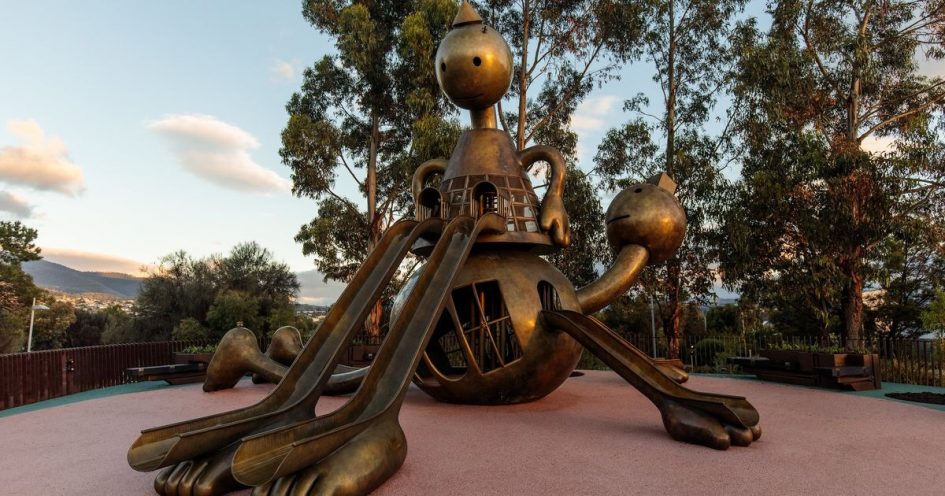 One of Australia’s most important contemporary art museums re-opened on Boxing Day after closing its doors for nine months. The Museum of Old and New Art in Hobart (Mona), Tasmania, has been rehung during the pandemic, drawing on the collection of its founder, the gambler and mathematician David Walsh.In a blog posted 17 March, when Mona closed, Walsh posted online: “I’ll keep everything together as long as I can, and that should be a long time. I’ll delay building projects and maintenance. I’ll stop taking holidays (not having a choice is a potent motive). I hope people care enough to visit when we reopen.”New pieces on show include a giant bronze sculpture by US artist Tom Otterness, Girls Rule (2020), which doubles up as a children’s playground while House of Mirrors (2016), created by the Australian artists Christian Wagstaff and Keith Courtney, invites visitors to get lost in a bewildering maze. Other works on display include the porcelain sculpture series Cunts… and other conversations (2008-11) by Greg Taylor and Sidney Nolan’s paintings such as Dog and Duck Hotel (1948).During lockdown, Mona live streamed a human work of art to laptops and mobiles worldwide. The museum showed Tim Steiner sitting on a plinth, displaying to online viewers his tattooed back designed by the Belgian artist Wim Delvoye.Alfredo Jaar’s installation The Divine Comedy is still publicly accessible in the Siloam extension which connects the main Mona building to the Pharos wing of the museum. Siloam also houses works by Ai Weiwei, Oliver Beer and Christopher Townend.Time Out Melbourne says: “Oliver Beer’s MONA Confessional is a massive listening tube, in which you can reveal your darkest secrets to strangers on the other side of the museum, and Christopher Townend’s Requiem for Vermin is an audio work featuring 230 speakers throughout the tunnels, activated by movement.”Visitors must pay a $10 deposit when booking an admission ticket. “After your visit, you will receive an email wherein you can choose to have your $10 refunded, or leave it with Daddy Walsh and he’ll pop it straight on the doggies,” says the Mona website.Mona’s co-chief executive Mark Wilsdon told ABC News that all 400 staff at the museum would return to work. “We were able tighten up and we were able to get some things done, the JobKeeper stimulus [federal government support package] has been very supportive in that way,” he said.Next month, Mona celebrates its tenth anniversary. We reported that the “museum’s crypt-like chambers [provide] an art experience that is both carnivalesque and contemplative. The antiseptic, white-walled display that is the hallmark of collectors’ galleries across Europe and the US is eschewed in favour of darkened rooms and red velvet curtains. And how many other collectors would place the ashes of their father on public display in the atrium?”