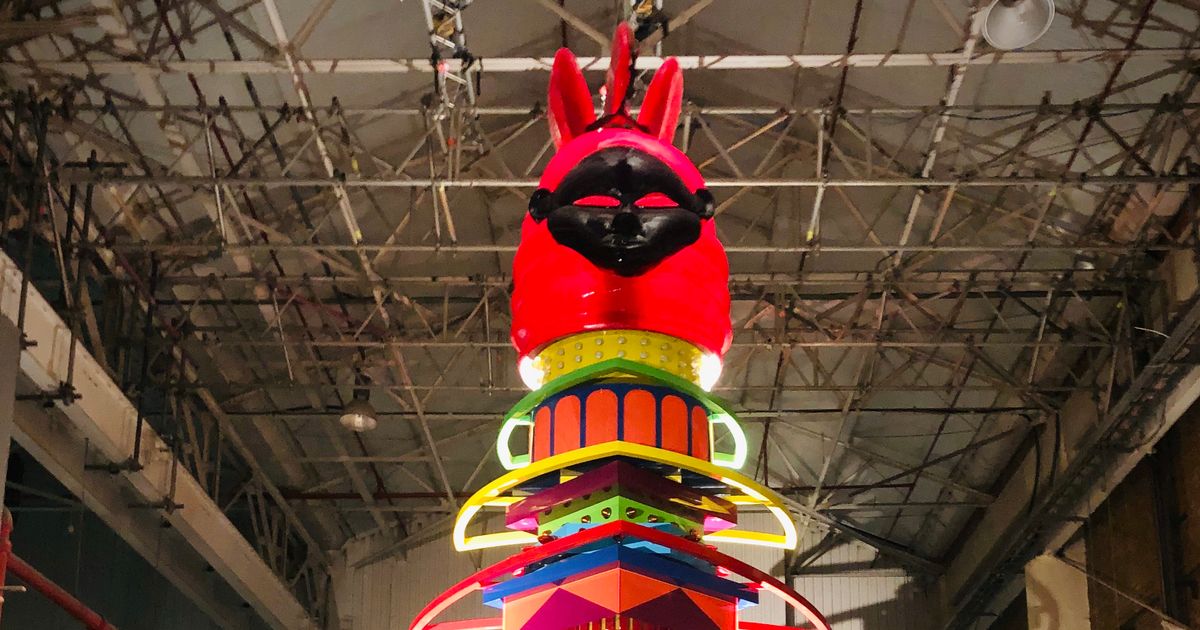 When it comes to sculpture, Zak Ové doesn’t hold back. His two giant carnivalesque moko jumbie stilt-walkers currently preside over the British Museum’s Africa galleries. And over the past few years his massed crowd of identically cast graphite figures, which are based on a wooden sculpture from Kenya and stand at more than two m-high, have been lined up before Somerset House in London, Lacma in Los Angeles, San Francisco’s City Hall Plaza and in the rolling acres of Yorkshire Sculpture Park. Now the British artist has created his largest work yet—a massive multicoloured structure nearly nine m-high called The Mothership Connection. “I wanted to make a work about the diaspora, referring not just to Africa but how the Black community has contributed to Western modernity worldwide,” says Ové.

Part-totem, part-robot, part-rocket, The Mothership Connection mixes African, Western and pop cultural references and lights up like a beacon. It has a base shaped like Mali’s famous Djenne mud mosque and a body built up out from elements taken from masonic architecture and Washington D.C.’s capitol building. “It’s not discussed enough how Black hands were instrumental in building these monuments through indentured labour and slavery” Ové says. Tribal masks, Cadillac lights and Haitian etched Veve symbols all adorn the surfaces, with Ové admitting that the piece’s supporting space rocket legs are “nicked off Thunderbird 3 and Africanized with ankle bracelets”. Topping off this imposing Mothership—and also mitigating much of its phallic thrust—are a pair of super-sized Mende helmet masks, traditionally worn exclusively by women from Sierra Leone to perform healing ceremonies. Cast in luminous resins, these sit at its head and are illuminated from within. “These masks are all about female power and healing and I love that their design is so futuristic,” Ové says of his sculpture, which also powerfully alludes to his enduring love of Afrofuturism. The work shares its title with that of a classic album by the Funkadelic group Parliament. “I remember seeing George Clinton and Parliament in 1976, the year Star Wars came out,” Ové recalls. “When he entered the stage in a spaceship it blew me away. It gave me a reference I could dream of.”

Zac Ové at Yorkshire Sculpture Garden with his sculptures Black and Blue: The Invisible Man and the Masque of Blackness.

Now, however, The Mothership Connection is currently languishing in storage and is in urgent need of somewhere to dock. The work was originally commissioned for a sculpture park on the Big Island of Hawaii but the pandemic put paid to that project. Talks are ongoing for its temporary installation in West London during the Kensington & Chelsea Art Festival this summer but the location is still has to be confirmed. With so much public sculpture currently being challenged for its ignoble associations and promotion of a blighted heritage, the time has surely never been so ripe for a new work that updates historical artefacts, forces them into uncomfortable associations and tells so many important and interconnected stories. “It’s important to keep these traditions alive,” says Ové, who would like to see his work “in the RA’s courtyard or in front of the Tate,” or even touring internationally. “All mythologies need new substance and an evolution,” he says. “In a very positive way this type of work in this moment can speak about all sorts of things that are necessary. The references I use investigate a history and then those histories open up other stories. It becomes a catalyst for talking points on a number of levels about who we are and what was real, and what wasn’t.” Let’s hope that Ové’s Mothership finds a home in the present and many terrestrial connections in the near future.

Ernesto Mallard, resolute leader of Mexican Op-Art, has died, aged 89
Allora and Calzadilla create a ‘haven’ from the horrors of the past year at the Menil Collection
To Top
error: Content is protected !!
Top