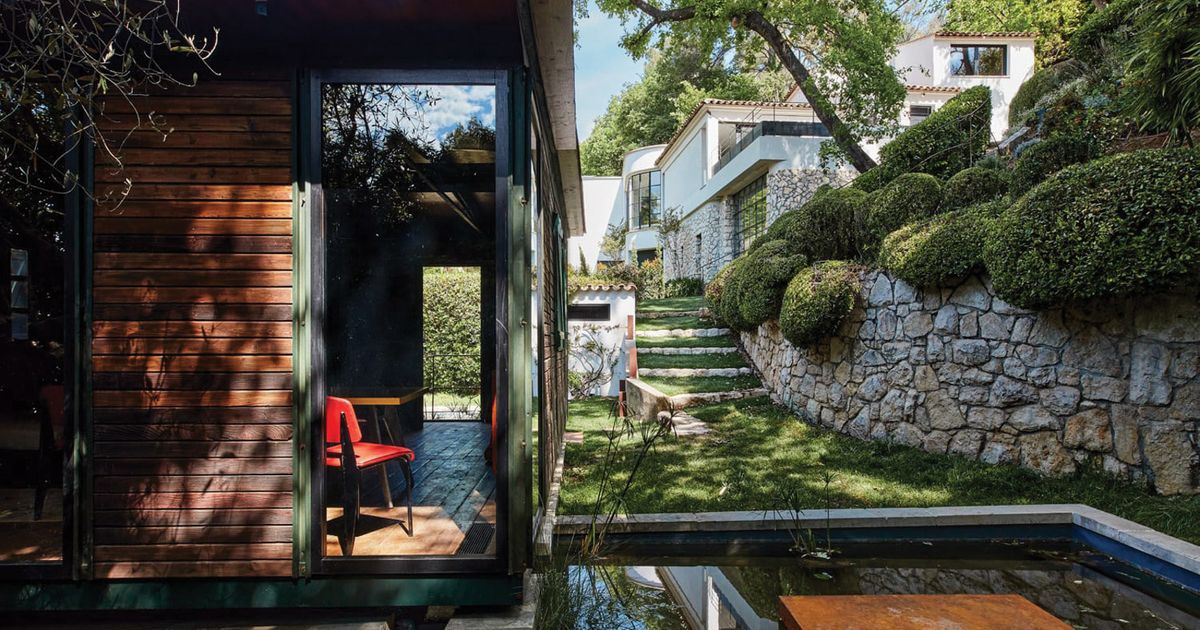 A demountable house designed by the architect Jean Prouvé in 1944 provides one of five guest suites at Fondation CAB, which are all fitted out with pieces from Hubert Bonnet’s collection of 20th-century design
© Antoine Lippens/Fondation CAB

The Belgian collector Hubert Bonnet once told The Art Newspaper that a 1974 floor sculpture by Carl Andre, Thirteenth Copper Cardinal, is the piece he would save if his house were on fire. Now that work is on show at a new outpost of his art non-profit, Fondation CAB, which opens on 25 June in the Provençal village of Saint-Paul-de-Vence—better known as the home of another distinctive private collection, the Fondation Maeght.Fondation CAB has taken over a former art gallery that was purpose-built in the 1950s and most recently occupied by the Belgian dealer Guy Peters. Bonnet spotted it three years ago after dining at the nearby Colombe d’Or restaurant with the artist Bernar Venet, who opened his own foundation in Le Muy, Provence in 2014. A collector of property as well as art, Bonnet quickly acquired the building.

The original foundation, established in Brussels in 2012, celebrates Bonnet’s love of Minimalist art (his first acquisition in 1990 was a single stack by Donald Judd) and invites young artists on residencies, which culminate in exhibitions. The same principles apply in Saint-Paul-de-Vence, where there is also a generous artist’s studio.

Twentieth-century design is a perfect match with Minimalist art. They share some of the same values in their truth to materials
Hubert Bonnet, founder of Fondation CAB

But with the designer Charles Zana, Bonnet has also turned the venue into a five-room guest house. Offices have been converted into two bedrooms, and an extension now accommodates two more suites (priced at €225-€250 a night). A 1944 demountable house designed by Jean Prouvé, designed to solve housing shortages in France and its colonies after the Second World War, provides a unique fifth room in the gardens, available at €750 a night. All are furnished with pieces from Bonnet’s extensive collection of 20th-century design.

“Twentieth-century design is a perfect match with Minimalist art,” Bonnet says. “They share some of the same values in their truth to, and sparing use of, materials.” Zana even compares the Prouvé house to a Sol LeWitt sculpture. “Both are just a metal frame,” he says.Visitors are welcome to stay the night or just eat local ceviche in the on-site restaurant, which comes with Charlotte Perriand tables and chairs and a large LeWitt wall drawing. The opening gallery displays include works by stars of the Minimalist school, such as Dan Flavin, François Morellet and Robert Mangol, as well as contemporary artists such as Daniel Steegmann Mangrané and Béatrice Balcou.

Works by women artists reach new heights in Canadian auction
What to see during Mayfair Art Week in London
To Top
error: Content is protected !!
Top