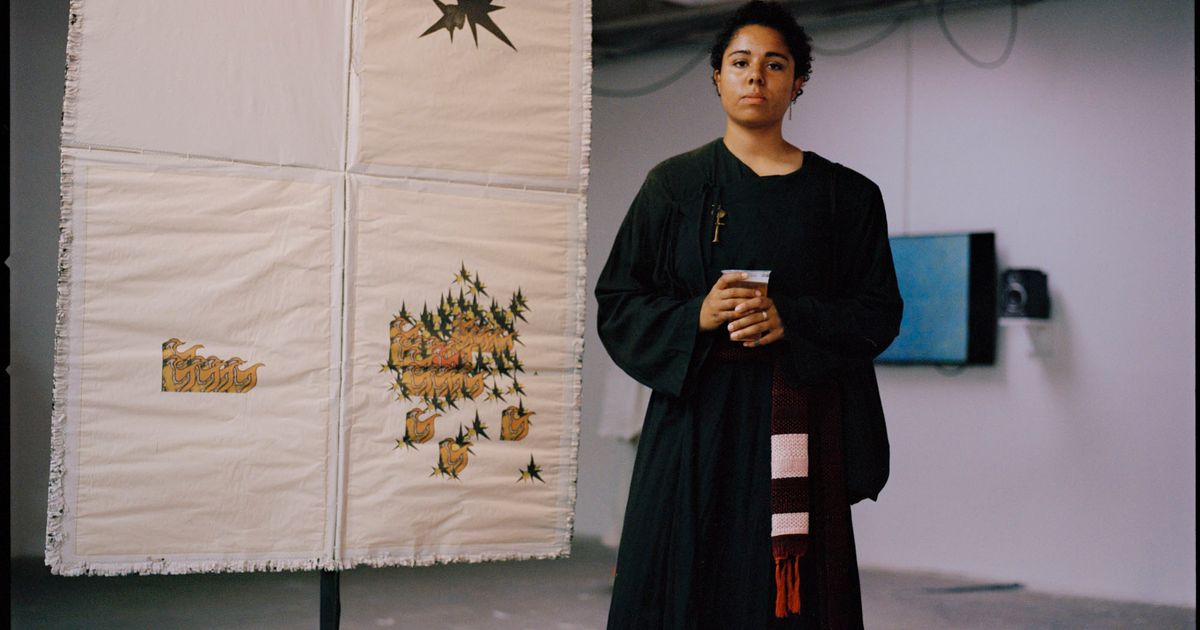 Tanoa Sasraku has won the Futures Award, worth £10,000

“Haunting”, “uncomfortable” and “risky” are just some of the words the Turner Prize winner Lubaina Himid used to describe the work of the UK artist Tanoa Sasraku upon awarding her the Arts Foundation Futures Award 2021 for visual arts. Sasraku’s win was revealed last night during an online celebration in which the judging panel, consisting of Himid, Andrew Durbin, editor of Frieze and the curator Fatoş Üstek announced her as the recipient of the prize, worth £10,000, which will go towards living and working costs. With a practice that spans drawing, film and flag making, Sasraku’s work focuses on her various identities—bisexual, British, Black, Ghanaian—as well as the ecology of rural Devon, southwest England, where she grew up. Her flag works are inspired by Asafo flags—striking appliquéd flags created by her ancestors in Ghana that were used during British colonial invasion to tell visual tales of slavery, industrialisation and native resistance.

In addition, her film work calls back to historic Black stage performance, including minstrel shows as well as the Harlem Renaissance and caricatures of Jim Crow—a racist, theatrical depiction of Black Americans that was popularised in the early 19th century. “Sasraku puts out quite a clear signal about what is possible —that it doesn’t have to be what you might expect. I’ve never really seen anything like it,” Himid said upon watching her fairytale-horror short films such as O’ Pierrot, in which Sasraku dresses up in costume to pay homage to Pierrot, a stock character pantomime clown. Based in London, Sasraku, 25, graduated from the BA Fine Art course at Goldsmiths College in 2018 and will be commencing her studies at the Royal Academy Schools in 2021. The award’s three runners up—Ayo Akingbade, Sonya Dyer and Rosa Johan-Uddoh—each received £1,000.

Sotheby’s brought to you by Bulgari—product placement at auction has arrived, with limitless potential
Fantasy island: Holt/Smithson Foundation invites artists to create a new work for coastal Maine islet
To Top
error: Content is protected !!
Top