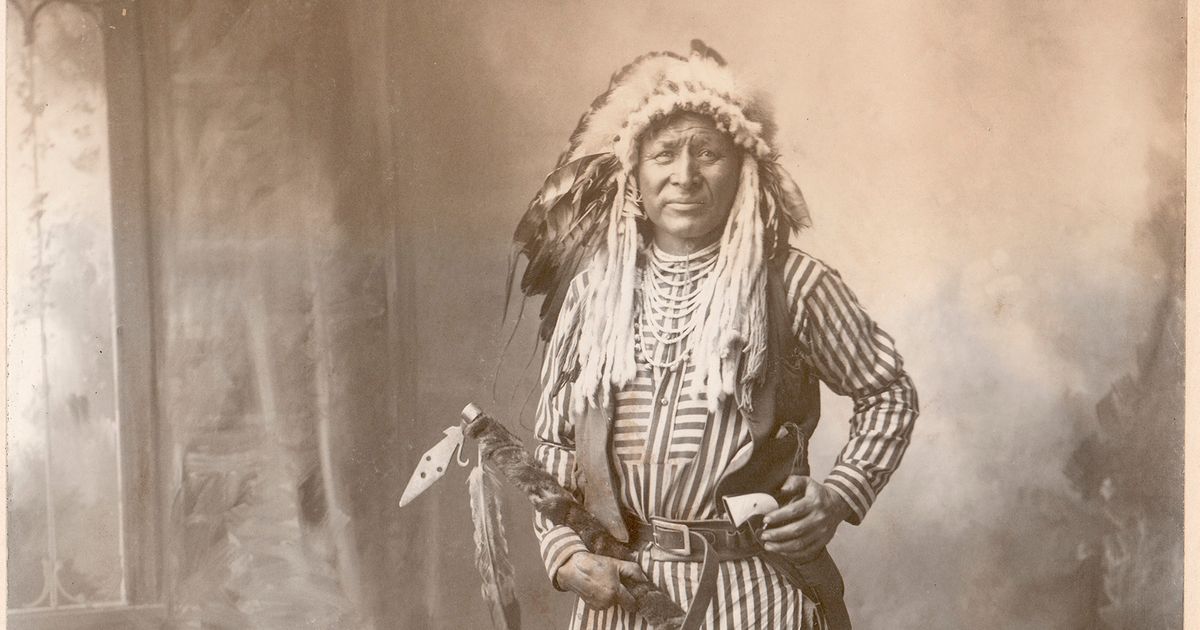 Hundreds of Native Americans came to Omaha, Nebraska during the summer of 1898, filling acres of sprawling fields. Wigwams, earth lodges and teepees crowded the encampment that hosted the Indian Congress—an unprecedented assembly of 35 indigenous tribes that coincided with the Trans-Mississippi & International Exposition. Contemporary artist Wendy Red Star is now reconvening the event of more than 500 delegates at a site-specific solo exhibition at Omaha’s Joslyn Art Museum, just a few miles from where the original Indian Congress took place—but in lieu of acres she is making do with two 18-foot-long tables. Still, her intent is that the effect be no less epic.Red Star’s installation uses a collection of sepia photographs documenting the event, taken by Nebraskan photographer Frank Rinehart and his assistant, Adolph Muhr. “I’ve viewed them in a book where you flip through, and I’ve viewed them online in the Omaha Public Library archive where you’re clicking on one image,” says Red Star, a Portland-based artist of Apsáalooke descent whose work often reframes ways of looking at historic photographs of her tribe. Montages from her Accession series entered the permanent collections of both MoMA and the Amon Carter Museum of American Art last year. “I want to have an experience of what that gathering would feel like.”

To that end, she cut out reproductions of every Indian Congress portrait, reuniting tribes and recreating the event’s magnitude out of a vast, but disjointed, collection. “It’s another way of not just pushing these images and these people off in the past, but really a way for people to feel the gravity of that extraordinary gathering,” she adds. Photographs of Apsáalooke delegates such as White Swan and Spies on the Enemy, and Apsáalooke interpreter Alexander Upshaw, are especially precious to Red Star as she imagines them traveling from the Montana reservation where she grew up to Nebraska—a journey of more than 800 miles.The grayscale portraits are visually striking, but the delegates’ participation is far from black and white. “The whole idea [of the International Exposition in Omaha] was to promote, essentially, colonisation efforts and agricultural settlement of the West. It very much had this ‘manifest destiny’ vibe to it,” explains Annika Johnson, the Joslyn’s curator of Native American Art, of the US Congress-sponsored event. The Indian Congress was originally meant to showcase the daily lives and culture of Native communities, but organisers pushed for the tribes to reenact sham battles and Ghost Dances, a painful reminder of the violence committed by the US Army against Native Americans just a few years earlier, culminating in the massacre of hundreds of Lakota men, women and children at Wounded Knee. “I hope visitors see the complexity of this gathering,” Johnson says.Red Star also hopes visitors take in the unparalleled mix of tribes that took part, such as Apache, Pueblo, Plains, Blackfeet, Cheyenne, and Lakota. As she bent over the photographs, cutting each by hand, she spotted details that are easy to miss when quickly scrolling through the portraits. Many interpreters wore uniform cowboy hats with the names of their tribes written on the hatbands, for example, and one whole delegation carried identical blankets, carefully presenting a united front to the fair’s two million visitors.

Then the delegations went back home, including Apsáalooke interpreter Upshaw, who likely played a part in getting Rinehart and Muhr to visit his reservation just one year later. Red Star tracked down Rinehart’s photographs from that trip as well, immediately recognising a familiar spot. “I grew up less than a mile away from where he photographed,” she says of Baáhpuuo, a sacred rock near Pryor Gap that the Apsáalooke believe houses the keepers of the earth. “What I love about those images is it’s not a set-up. It’s 100% where we would be. There’s a huge difference in coming there and photographing, versus all the sort of made-up shots and still shots and studio portraits that he had taken in Omaha.”For her installation, Red Star excised the Indian Congress delegates from Rinehart’s fake studio setting, replacing his classical drop cloth with a blown-up photograph she took of Baáhpuuo, instead. “It’s the only photo that’s in color,” Red Star shares of her decision to fuse the archival with the contemporary, and shift the context in which viewers see these individuals. “A lot of times, when you’re looking at these historical photos, you tend to think of them as existing in the past. To have the actual place that I photographed, just last year, I hope that will be an anchoring point.”