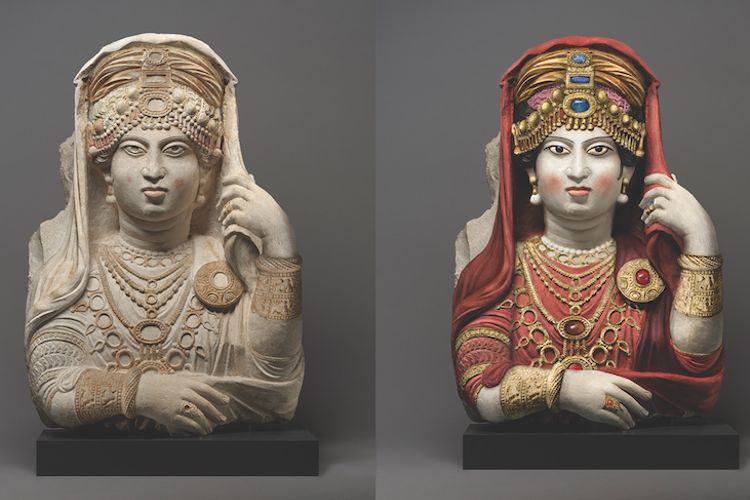 From left, The Beauty of Palmyra today, with reconstituted elements, and in the final stage of digital reconstruction
Tahnee L. Cracchio/Ben Goddard/Cecilie Brøns/Lars Hummelshøj

Harald Ingholt, a Danish archaeologist, was on his third campaign of excavations at Palmyra, in present-day Syria, in 1928, when his team unearthed a half-length portrait of an unknown woman made between AD190 and 210 in a tomb dubbed Qasr Abjad. Her sumptuous jewels and pearls and swathes of luxurious fabric led him to pronounce her “the most beautiful female bust I have seen”. The following year Ingholt presented The Beauty of Palmyra and around a dozen other sculptures to Copenhagen’s Ny Carlsberg Glyptotek, a museum built on the ­collection of the Carlsberg brewery scion Carl Jacobsen, where the archaeologist was also a curator. Today, the Glyptotek’s collection of Palmyrene tomb sculptures is the largest outside Syria.The Beauty of Palmyra has begun to yield some of its secrets. For the past 18 months, Cecilie Brøns, an archaeologist and director of the Glyptotek’s Tracking Colour project, which examines the use of pigments in antiquity, has led a team reconstructing how the tomb sculpture may originally have looked. The research, financed by the Carlsberg Foundation, will be featured in The Road to Palmyra, an exhibition that opened on 20 September at the Glyptotek and celebrating the return of the museum’s tomb sculptures from a year-long loan to the J. Paul Getty Museum in California.The researchers’ work began with a digital reconstruction of the sculpture’s missing fragments, including the nose, lips and left hand, after closely comparing it with other sculpted portraits from Palmyra in the collections of the Glyptotek, the British Museum and the Louvre, Brøns says.The next step was to establish the pigments used to paint the skin, hair, jewels and textiles. Using X-ray fluorescence, the team identified the chemical composition of paint patches, which were well ­preserved due to the sculpture having been ­underground for nearly two millennia. Most of the colours turned out to be local earth pigments, including red and yellow ochre. The researchers also found madder lake, which fluoresces with a coral colour under ultraviolet light. “For such a fine and elaborate portrait, the pigments weren’t at all precious,” Brøns says.The team also employed visible induced luminescence, used to identify a pigment known as Egyptian blue that was in use from the third millennium BC. “What was intriguing is that we didn’t find any on The Beauty of Palmyra, despite its widespread use in the ancient world at that time,” she says. Some of the other works in the Glyptotek’s tomb sculpture collection appear to have applications of lapis lazuli from Afghanistan, which was “amazing”, Brøns adds. “We only have about three other instances in the ancient world of it being used as pigment.” Once established, the pigments were incorporated in the reconstruction to create a video bringing The Beauty of Palmyra back to life. As a final touch, her jewels were reset digitally with the types of precious stones found in excavations at Palmyra. Still, the project involved some guesswork. “It was easy to say, ‘Make the ­jewellery look gold’, but areas such as her eyes had no traces of colour left,” Brøns says. The Los Angeles County Museum of Art has a funerary portrait from Palmyra with inlaid black-glass eyes, so the team ­followed that example.• The Road to Palmyra, 20 September-1 March 2020, Ny Carlsberg Glyptotek, Copenhagen