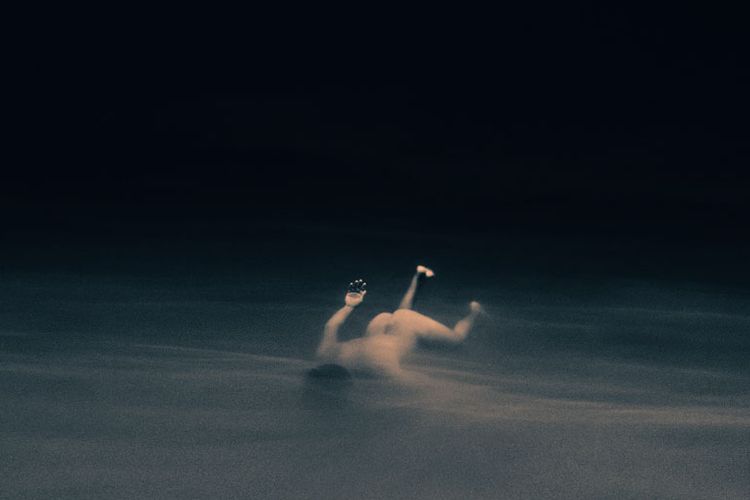 
A pool of light lies in the centre of a darkened underground room at Dittrich and Schlechtriem for Julian Charrière’s exhibition Silent World (until June 29; free), emitting spectral, vapor-like waves. Around it hang photos showing free divers in a Mexican cenote—aquatic caves associated with the mythical Mayan underworld—their bodies dissolving into the blackness of the water’s depths. Charrière, a graduate of the Olafur Eliasson Institute, is part of a wave of artists who travel to adventurous geographies, seemingly building upon the Romantic figure escaping into unfamiliar terrain, to then ask: to what end? The photographed figures appear to be suspended in purgatory, feeding into the idea of deep water as a “dream state”, a collective source of fantasy and fear that is usually presented alongside David Attenborough’s narration. But the ocean is not a metaphysical realm, it is a very real, and rapidly acidifying environment and Charrière makes us acutely aware of this. Charrière also presents a radioactive coconut on a mirrored plinth, collected from Bikini Atoll, an environment rendered inhabitable by nuclear testing. Standing in front of it, the viewer’s disembodied lower-half merges with the fruit—a new warped species emerging from the Anthropocene.

Bernar Venet is touted as the first artist to formally present a sculpture without a specific shape and the first to show unmanipulated natural material as art. Venet’s current show Indeterminacy (until 22 June; free) at Blain Southern is less pioneering, but nonetheless speaks well to the strange, self-torturing plight of the modern man. The stand-out works from the last decade are Venet’s Indeterminable Lines sculptures, enormous ropes of rolled steel that the French artist has beaten and reshaped into coils that appear half-way between natural forms and industrial waste. This process is no doubt physically exerting (as Venet keenly reminds us in the exhibition text) underlining that the white male struggle is a strange process to be so engrossed by, especially during a Gallery Weekend which came under fire for its very white and male line up. But Venet’s work powerfully succeeds in how it lays bare the follies of masculinity, the innate desire to conquer and tame. It tells us that a struggle can be invented from just about anything.

Vogelspinne at BQ gallery (until 6 June; free) sees the German artist Raphaela Vogel’s mind turned inside out, and what a strange thing it is. A hypnotic video plays on a screen in which drone footage shows Vogel trapped on a rock, surrounded by a spiralling vortex of waves, the frames seamlessly merging into each other. Around the gallery, long discordant piano notes and the sound of crying babies create an encroaching sense of dread. Vogel allows us to place her among the list of female artists who use their trauma as exhibition fodder with heavy nods to Louise Bourgeois in the form of arachnid structures made from aluminium trusses and fibreglass. But unlike those enormous nightmarish works, Vogel’s show doesn’t so much emotionally exhaust as merely disorientate. Brightly coloured surf sails populate the space like taxidermy butterflies, and a collection of hanging dolls is almost farcically creepy; though none of this is particularly heavy or heart-wrenching stuff. Nor is the viewer ever truly enclosed in a labyrinth of Vogel’s world. The gallery’s glass walls allow a sunny day in Mitte-Nord to carry on just outside one’s view and reminds us that Vogel’s traumas might be real, they are also not ours, and we can leave whenever we want.

The walls come tumbling down at new Object & Thing fair
Maurizio Cattelan’s golden toilet, once offered to Donald Trump, is on its way to the UK
To Top
error: Content is protected !!
Top