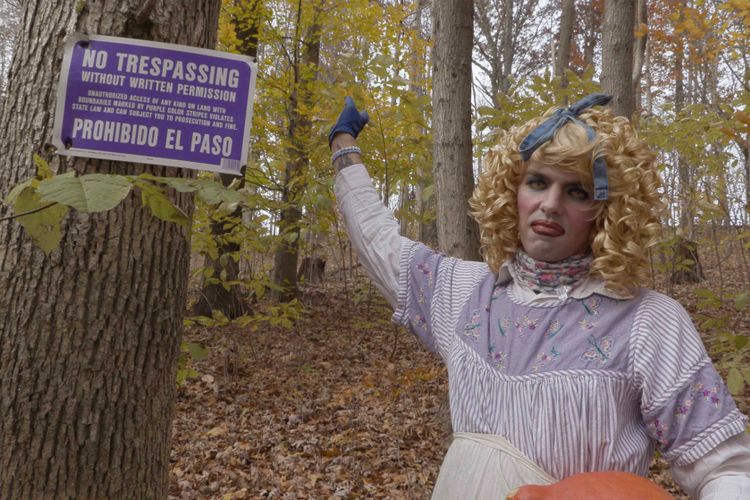 
Whether Line, Lizzie Fitch and Ryan Trecartin’s ambitious new multimedia installation commissioned by the Fondazione Prada (until 5 August, €10) is truly bonkers and darkly funny—think Little House on the Prairie meets The Kardashians, with a dash of Sleepy Hollow. The US duo went “back to the land”, relocating to rural Ohio, to create this work, which was started in late 2016 (the duo build their own sets). It is based on a “haunted map”, a surreal, creepy location with a life of its own. Here, the viewer walks through a sound installation enclosed in a caged walkway across the foundation’s courtyard, before being deposited in a hobby barn to watch the main event, a feature length film, Plot Front (2019). It’s certainly a sensory assault this biting jump-cut satire and territorial tensions and the conflict between the urban and rural dominate. This is thanks in part, Trecartin says, to “some drama” with their neighbour in Ohio during the filming which resulted in “a lot of content around concepts of territory, property and land”. Consequently, he says, “the movie got a lot darker.”

Under the Tiepolo frescoes of Milan’s Palazzo Dugnani, a peacock’s claws scrabble on a slippery floor in MASBEDO’s Fragile (2016). A line of young women, arm in arm, goosestep—or can-can?—around a desolate street corner into a naked middle-aged couple wearing only their hats in Julian Rosenfeldt’s nightmarish Deep Gold (2013/14), a film that borrows heavily from Luis Buñuel’s Surrealist L’age d’or. These are two of the six video installations from the Germany-based Wemhöner Collection of cinematic art in Hypervisuality: Making the invisible visible (until 14 April). Forgive the naff title—this is a captivating, if discomforting, show, with works by the duo MASBEDO, Rosenfeldt, Isaac Julien and Yang Fudong installed throughout the palazzo, which is normally closed to the public. The combined effect is one of tingling alienation, of being caught between the real and the imagined.

In a city of cavernous privately funded spaces (one-upmanship surely), the intimate, softly lit Fondazione Carriero housed in the 15th century Casa Parravicini makes a welcome change. Its domestic scale is fitting for the first solo exhibition of the Brazilian artist Lygia Pape (until 21 July; free) in Italy, with each room looking at a different aspect of the Neo-Concrete artist’s work from 1952 to 2000. While the lower floors take in her drawings and (a highlight) a whole room of colourful square Livro do Tempo sculptures, both wall-mounted and free-standing, the star is at the very top—the sudden surprise on the third floor of entering a dimly lit, decadent neo-rococo room in the centre of which the threads of one of Pape’s Tteia (web) structures glistens under a spotlight. Chiming with the zeitgeist, the Pape show is one of numerous shows of female artists across Milan this month—Sheela Gowda in the vast Pirelli Hangar Bicocca, Anna Maria Maiolino at PAC and The Unexpected Subject: 1978 Art and Feminism in Italy at Frigoriferi Milanesi are worth the trip too.

Wallinger’s upside-down globe outside LSE angers Chinese students for portraying Taiwan as an independent state
Comment | Should dealers reveal past prices in provenance?
To Top
error: Content is protected !!
Top