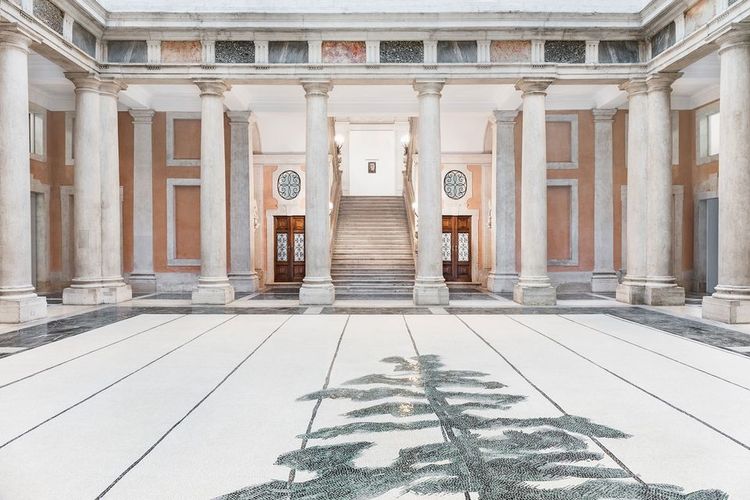 
Luc Tuymans continues to explore troubling histories in this exhibition at the Palazzo Grassi (Luc Tuymans: La Pelle, until 6 January 2020; €18, concessions available) with 14 paintings deal with the Third Reich. But he says that they also evoke his feeling that “the whole constellation of the West is in dire straits” today. “The consequences of that specific era stretch all the way to what we are living now—the fact that anti-Semitism is cropping up in France, that there is a parade in Belgium that portrays Jews like they were portrayed in Nazi Germany.” At the heart of Tuymans’s project is a central conceit: images are unreliable, they can offer us no more than a fragment of reality, and our own memories—personal or collective—mislead us.

This exhibition at the Fondazione Prada at Ca’ Corner della Regina is the first major survey of Jannis Kounellis (Jannis Kounellis, until 24 November; €10, concessions available) since his death in 2017. Kounellis was one of the leading figures of Arte Povera, the term coined in 1967 by the curator Germano Celant to describe a group of young Italian artists who rejected traditional processes and materials. Celant has also organised this exhibition that brings together 70 works dating from 1958 to 2016, across the three floors of the 18th-century palazzo. The exhibition sets out to show the transition from the artist’s early pictorial production of the late 1950s and early 60s—with canvases featuring numbers and letters mimicking those on the streets of Rome—to works incorporating everyday materials, created from 1967 onwards, that Kounellis is best known for.

The first major Italian survey of the Armenian-American artist Arshile Gorky, this show at Ca’ Pesaro International Gallery of Modern Art (Arshile Gorky: 1904-1948, until 22 September; €14, concessions available) explores the dichotomies of the work produced during a tumultuous life cut short by suicide aged 44. The more than 80 works range from early drawings and paintings clearly influenced by Cézanne and Picasso, to later near-abstract masterpieces, which paved the way for Abstract Expressionism. The show “illuminates areas still in the shadows of the history of the art of Italy, allowing us to explore in depth the osmosis between European and American painting”, says the co-curator Gabriella Belli.

Virtually unseen Van Gogh painting comes up for sale in New York next week
Venice Biennale 2019: the must-see pavilions in the Arsenale
To Top
error: Content is protected !!
Top