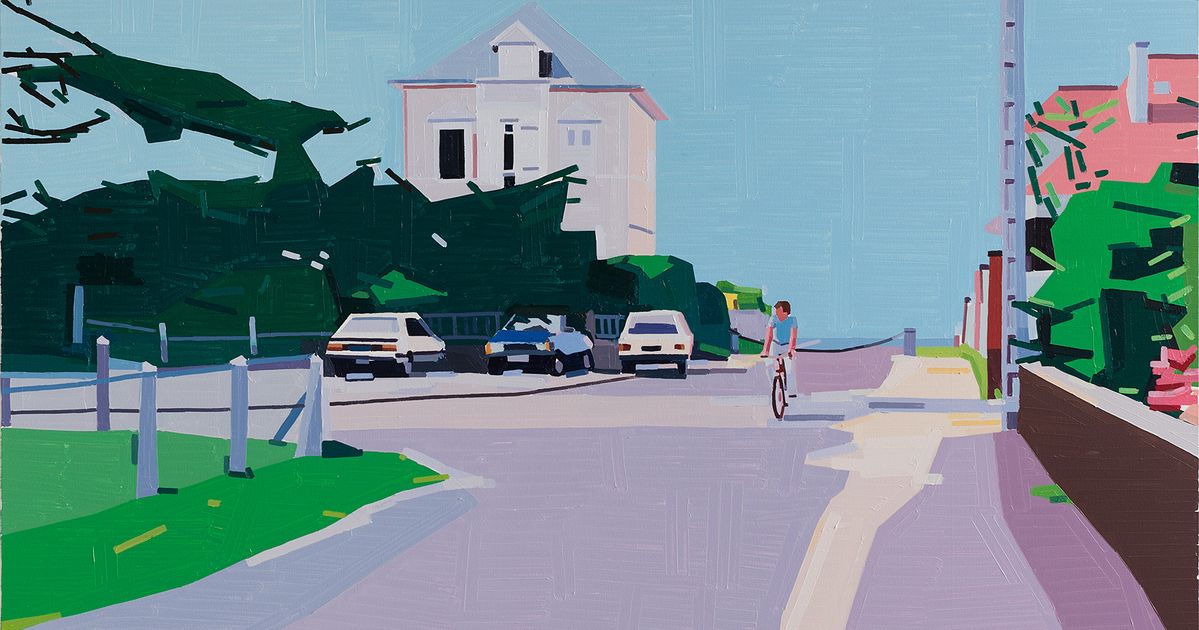 If Guy Yanai was a member of the Hollywood Foreign Press Association, he would have trouble picking the Best Motion Picture nominees for the Golden Globes. None of his choices would be from 2020, or Hollywood. That said, the contemporary painter is constantly nominating films to canvas, converting vintage footage into his characteristic linear brushstrokes and palette of emerald green, azure, and deep rose pink.“It has been a time of just watching and rewatching all these really breathtaking films,” Yanai says of 2020, which booted him off his normal work/travel schedule. Pre-pandemic, he based paintings on photos of hotel rooms he would checked into while installing shows in New York, Los Angeles, or Cologne. Now he paints rooms glimpsed onscreen from his Tel Aviv apartment. “We’re stuck, I’m just watching films.” His cinematic paintings meanwhile will jetset—unaccompanied—this year to FIAC and Dubai’s Volery Gallery in March, then a solo exhibition at Praz Delavallade gallery in Los Angeles in May, and lastly a solo booth at the Taipei Dangdai fair and one-man show at New York’s Miles McEnery Gallery in October.Unable to go anywhere himself, Yanai streams a curated playlist of classic French films directed by cinematic heavyweights, like Éric Rohmer and Jean-Luc Godard. “The perfection of the visuals overwhelms me, especially in Rohmer,” Yanai says. “If he knew he’d film in the spring, he would go nine months earlier and start planting the colors of the flowers he wanted.”Anyone sharing popcorn with Yanai expects him to hit pause at the most inopportune—and visually arresting—moments. Even so, he admits some plotlines do not immediately grip him. “You watch these films and you’re like, it’s kinda boring. No one has sex. There’s no action, no effects, no fire,” he says. “And then they never leave you.” He will paint some of the scenes the very next day, from printouts of iPhone photos. Others linger with him for years. He chooses scenes that are “emotional situations”—a term borrowed from the writer Susan Sontag—and blows up their painterly sequels into larger-than-flatscreen size. Viewers may recognize the film reference, but Yanai says it is okay if they do not. “The painting has to carry itself on its own,” the artist says.Yanai is, after all, not part of the film industry. Though his votes were not counted in determining who the Golden Globes will go to tonight, here are five films he recommends you watch (and which he has painted).

Contempt (Le Mepris) (1963)Fritz Lang plays himself in this Godard film about film-making, set at the stunning Villa Malaparte in Capri (the subject of a recent Gagosian Gallery exhibition). In one of the many scenes Yanai has painted from Contempt over the past decade, Brigitte Bardot walks down the striking staircase atop the villa’s roof, after telling her husband she doesn’t love him anymore.

Claire’s Knee (Le Genou de Claire) (1970)The climactic scene in this Rohmer drama is when Jérôme finally touches Claire’s knee—an act the soon-to-be married older man fetishized since meeting the teenager weeks before, during his summer holiday at Lake Annecy. “No one has sex in these movies,” Yanai points out. “Everything is insinuated.” He painted a suggestive scene in which Jérôme, Claire, and their mutual friends are cherry-picking.

The Things of Life (Les choses de la vie) (1970)This drama directed by Claude Sautet follows a day in the life of a man leading up to his fatal car crash. Yanai has painted its diametrically opposed scenes: one where this man writes a break-up letter to his lover and another where he bikes around alone, daydreaming of a happy future together.

Pauline at the Beach (Pauline à la plage) (1983)This installment in Rohmer’s Comedies and Proverbs series tracks the summertime flings of a teenaged Pauline and her older cousin, Marion. Yanai chose a precious scene where Sylvain, a teenaged boy Pauline met at the beach, is about to play a record so they can dance. “There’s something about that [adolescent] period,” says Yanai. “It’s just so pure, it’s all these things for the first time.”

A Summer’s Tale (Conte d’été) (1996)In this romantic film directed by Rohmer, a young 20-something student must choose between three women he’s dating simultaneously (unbeknownst to them, of course). In Yanai’s painted scene, the student is kissing a woman asking him to travel with her. “In the end,” summarizes Yanai, “he doesn’t go anywhere with anybody.”

Calling all (digital) bookworms—virtual art book fair gives publishers a lifeline during the pandemic
Comment | The NFT craze encapsulates the absurdity of the art world—and its obsession with authenticity
To Top
error: Content is protected !!
Top