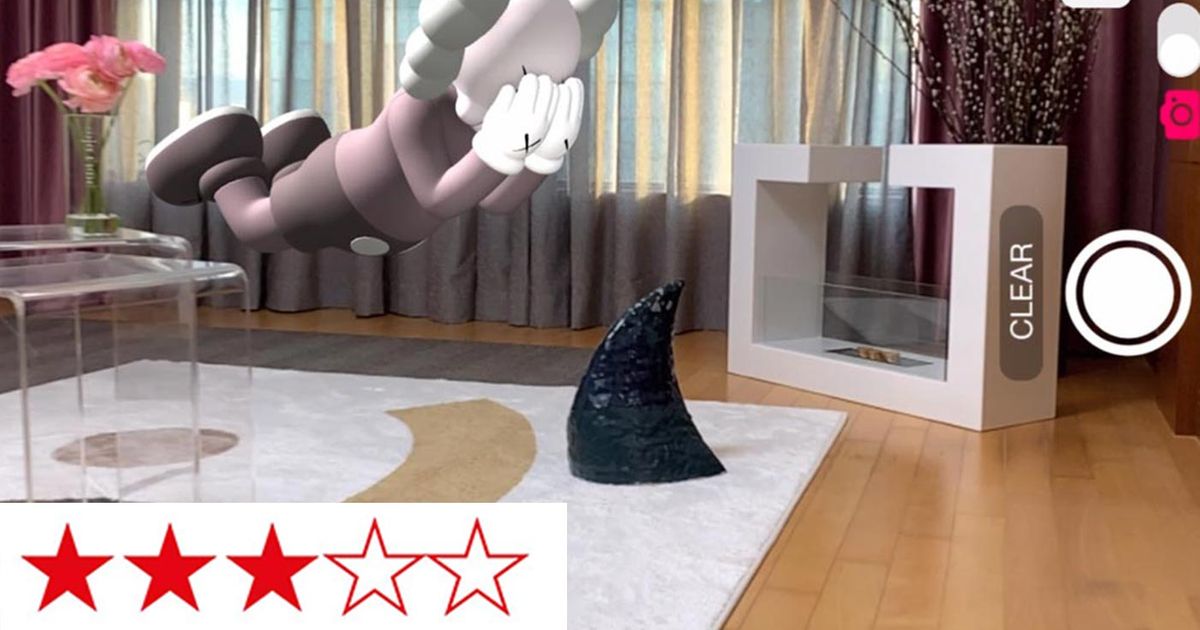 What is it?Unreal City is 36 augmented reality (AR) sculptures arranged as a walking tour along the River Thames, in London. The sculptures are placed across 24 sites between Waterloo Bridge and Millennium Bridge on the Southbank by leading artists from all over the world including Nina Chanel Abney, Olafur Eliasson, Cao Fei, Alicja Kwade, and others. It is available to users globally—to place the artworks in their own environments, in AR—until Tuesday 9 February.  Created by: Acute Art. Produced by: Dazed MediaCurator’s NoteLast July, this panel released its first review of an Olafur Eliasson experience produced by Acute Art. That experience, an augmented reality smartphone app that enables you to view the first augmented reality artwork by the Icelandic artist and curator, received 3 stars. As we approach the anniversary of global lockdowns, we are considering what a year of viewing art virtually has meant to the works, the platforms and viewers. And so we decided to take another look at a new Acute experience, this one produced with Dazed Media.—Gretchen AndrewThey Say:

While the art walk is intended to be experienced along the Thames, in London, the app makes it possible for all to enjoy from anywhere in the world
Carole Chainon

Dhiren Dasu: Easy to use on Android phone through the Acute Art appCarole Chainon: The art walk is accessible to users with compatible iPhones and Android devices, making it a convenient entry point into XR via a mobile phone rather than a dedicated device. I had downloaded the Acute Art app for a previous review and enjoyed referring to it for this one, especially considering that there aren’t that many XR art apps that lend themselves to recurrent use. There are new artworks from various artists to interact and play with. While the art walk is intended to be experienced along the Thames in London, the app makes it possible for all to enjoy from anywhere in the world.Seol Park: I faced some hurdles as I was accessing the AR exhibition from Seoul, Korea, that I wouldn’t have discovered otherwise. The app is accessible to latest versions of iOS users, however many of the artworks wouldn’t load within the app—perhaps because of regional licences. When tried with my Android phone, the app was not compatible.Eron Rauch: The PR blurb stated the intent was to make a London-specific AR show globally available, yet many works are “Unavailable” in the app. For instance, Cao Fei, who is one of my favourite artists, is listed, but the full work is only accessible while physically at the Serpentine.The Map section (which is given with no explanation of what it does) has an artwork ostensibly located in Venice, California—local to me—but the pin is mysteriously 100 feet out to sea. I could take my surfboard to investigate, but my phone might not like the paddle out.From a critical, art historical standpoint, how good is the art?

Dhiren Dasu: Lu Yang’s rendering of the kinetic dancer and Cao Fei’s virtual child were both very well executed. Marco Brambilla’s upgrade of the classic magnifying lens screensaver delivered in 3D/AR successfully managed to make my familiar studio space new and exciting. The overall quality of the rendering, interactivity, and audio really does push the AR experience to a new level especially given that there is no technological barrier to entry. As good as seeing the work in the flesh… better in some ways.

Carole Chainon: The selection of artworks was well suited to XR as their physical dimensions, scale and movement made use of the space. The themes of loneliness, climate change and the limitations of the physical body among others, are evoked to allow us to ponder on the issues affecting our world and society, and to be enjoyed in the environment of our choice. The pieces speak to us, amuse us, scare us, warn us, they sometimes even remind us of kinder times—they are interactive and vary in shapes, sizes and movements. We also have agency over which we want to see. We get to be the curators of our own art walk.Seol Park: Though only two artworks by KAWS loaded properly during my in-app interaction, I could see that most pieces in the selection are signature works by leading artists—meaningful in that this tool extends material-based works (back) to digital renditions of them, but lacking in that few pieces were conceived specifically for the unique conditions of AR.Eron Rauch: Most of the works feel as if they have little interest outside of looking like a cool Snapchat filter or purikura sticker. To highlight the contrast, I’d offer Cao Fei’s own RMB City project from 2009, which is massively more critically ambitious, technologically advanced, and openly collaborative than what we’re offered in Unreal City/Acute Art.That said, there is one work in the app—Christo and Jeanne-Claude’s The London Mastaba—that is revelatory for engaging AR in the long arc of art history. It’s not this work, per se, but simply their inclusion that makes evident that their wrapping pieces (and landscape curtains) are clear touchstones in the lineage of AR’s overlay interventions! There are big implications from this connection that I’m still chewing on, so if that’s all I got from the app, it was well worth my time.What medium-specific qualities of VR/AR does it employ? Consider, what is gained by enjoying this in VR/AR rather than In Real Life?

Dhiren Dasu: The ability to view mix and match different artists work and view it in one’s own space is only possible through the medium of AR. Carole Chainon: I loved the play on scale, the interactivity and the movements of each artwork. These aspects might be challenging to recreate in real-life but this is where XR shines, by providing a digital canvas and fostering an emotional connection to the art, using its dynamic and ever-changing form of the medium.Seol Park: The way how the app leaves it up to users to create their own mise-en-scène with the artworks delightfully brings out our inner children. It’s especially fun when you make the AR pieces interact with objects and people in the real-world scene. I staged a little murder crime scene in my living room where KAWS’ Holiday Float lay cross-eyed and dead on the floor, with fingers pointing to a menacing shark (stoneware) that attacked him. There is a lot of room for users to employ creativity and sense of composition.Eron Rauch: Nina Chanel Abney’s Imaginary Friend work stuck out as one of the more subtly savvy approaches to the metahistory of AR tech narratives. There is a long lineage of “ghost in the machine” works about digital beings, gods, lovers, and assistants, visible only to their users, and this divine being sits in conversation with that (oft-white) history and with us as users.Does it break new ground technically?

The use of audio and interactivity, albeit limited, does open new and exciting possibilities
Dhiren Dasu

Dhiren Dasu: Visually speaking, Acute Art’s deployment is not novel. However the use of audio and interactivity, albeit limited, does open new and exciting possibilities.

Carole: It doesn’t break new grounds technically but fits the trend as XR art shows have become more ubiquitous in the past year, providing artists and institutions a space to display the artwork, as well as a gateway for art lovers unable to leave their home.Seol Park: I was curious to see how the app handles the loading and placing-into-the-real-world-scene of more than one AR piece at a time, as its PR image seemed to suggest. I was not able to test this due to the app not properly loading content in my region. I was only able to place one piece into my view at a time before I “clear” it from the view. Considering the calibre of artists whose works are featured and the level of sophistication one would expect from any project they’d lend their work to, the app itself is surprisingly clunky. Eron Rauch: They don’t seem to have updated the app much since the previous review. It’s still very buggy, with constant crashes and buttons not working. It’s also still woefully under-optimised, grinding a new Google Pixel to a halt by, in one instance, placing only two objects in a room together.What does it say to you about the future of the medium/art form/ use of XR within the art world?

The art world, including artists, is still struggling to engage with XR beyond PR-friendly technological curios. However, there are increasingly moments that suggest historical connections and potentially rich future trajectories
Eron Rauch

Dhiren Dasu: The possibilities of new ways to create, exhibit, view, and interact are slowly being untethered from space and time. Site specific work can now be transposed to any location. As the tools of capture, display, and projection get better, our reality will truly be augmented.  Eron Rauch: Returning to the same app after months of other reviews, my takeaways are twofold: The art world, including artists, is still struggling to engage with XR beyond PR-friendly technological curios. However, there are increasingly moments that suggest historical connections and potentially rich future trajectories.The XR panel’s ratingsGretchen Andrew gave a rating of 2/5 stars.Carole Chainon gave a rating of 4/5 starsDhiren Dasu gave a rating of 4/5 stars.Seol Park gave a rating of 3/5 stars.Eron Rauch gave a rating of 2/5 starsGiving an overall panel rating of 3/5 stars.The Art Newspaper’s XR PanelGretchen Andrew is a Search Engine Artist and Internet Imperialist who has manipulated the US presidential election with art and desire. Her next exhibition is with Annka Kultys in February 2021.  Carole Chainon is the co-founder of JYC, a XR development and production studio based in LA with a presence in Europe, creating XR experiences for the entertainment and enterprise sector. She is also a Spark AR Creator.Dhiren Dasu is a digital media creator and consultant. His areas of speciality include photography, film, virtual space, graphic design, visual effects, animation, and audio production. Dasu, in his fine art persona as Shapeshifter7, makes artworks that echo and recompose the architectural spaces he photographs, turning them into immersive spaces while exploring the nexus of photography, collage, symbols, and perception. Seol Park bridges technology, art, and branding. After working with Microsoft and INTEL, she now guides global branding at LG with emphasis on digital and cultural engagement. Her past work in XR have appeared in Media-N, ABC TV (Australia), The Southern Star (Ireland), and more. She was named in Sotheby’s Institute’s “4 Under 40” in 2019, and currently serves on the Board of Trustees for The American Folk Art Museum.Eron Rauch is an artist, writer, and curator whose projects explore the infrastructure of imagination, with a focus on subcultures, video games, and photography history.

‘The London art world we started in could fit in a single pub’: Frieze turns 30
Joan Mitchell Foundation switches to longer-term support of US artists
To Top
error: Content is protected !!
Top