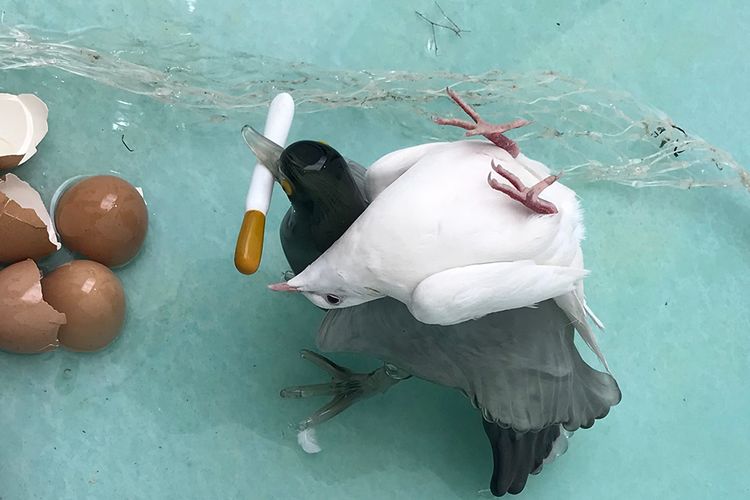 Laure Prouvost’s French Pavilion in the Giardini has been one of the big hits of the preview week of this year’s Venice Biennale (until 24 November). But along with her artistic prowess, one of the main talking points among the preview crowds has been the extraordinary bird-wrangling powers of Kader Bueno. Here, the French magician extraordinaire, who was one of Prouvost’s fellow travellers from Paris to the Giardini, had his avian sorcery recorded in the film at the centre of her pavilion.

On the opening days, visitors entering the immersive pavilion, entitled Deep Blue Sea Surrounding You, were treated to the sight of Bueno hypnotising a white dove into a state of open-eyed unconsciousness by means of some stroking and guttural cooing. He then laid the prone creature across the back of a glass duck placed on the floor.

Minutes later there was the astonishing sight of what appeared to be a dead (or stuffed) bird fluttering back to life, before being induced by Bueno into a state of drowsiness again. However for those concerned about their welfare, different birds were used in strict rotation and never for more than a few sessions at a time.

Meanwhile, Francesco Bonami, the honorary director of the Fondazione Sandretto Re Rebaudengo is going back to his painterly roots at this year’s Biennale. If you go down to the Zattere waterfront today (weather permitting) you will find the eminent curator outside the V-A-C Foundation, surrounded by oil paints and stacks of canvases and willing to portray anyone who approaches him. Or at least a part of anyone, as his method is first to take a picture of his subject on his phone and then to select a pertinent detail to commit to paint—in the case of your correspondent it was a section of lip and an ear.

And why has he decided to take this new course of action? “When you get old you lose your mind and do crazy things; artists become curators and so curators can become artists,” he explained, also adding, “I’m a painter not an artist. I wish I was an artist!”

Bonami is also wielding a paintbrush at the request of the Milan and New York-based artist collective Alterazioni Video, who in turn have been invited by the V-A-C foundation to create a three-day circus event open to all to celebrate the opening of the foundation’s new exhibition, Time, Forward! (until 20 October).

In fact Mr Bonami is the most sedate of the entertainments on offer and is painting his portrait details while surrounded by drummers, a stunt motorcyclist and various Dionysian performers in a near-naked state. It should be noted that for anyone wishing to acquire their facial fragments, these are not available for purchase as their maker has plans to exhibit them in the future…

• To listen to our Venice Biennale podcast in which we speak to Laure Prouvost, click here

• For all our coverage of the 58th edition of the Venice Biennale, click here