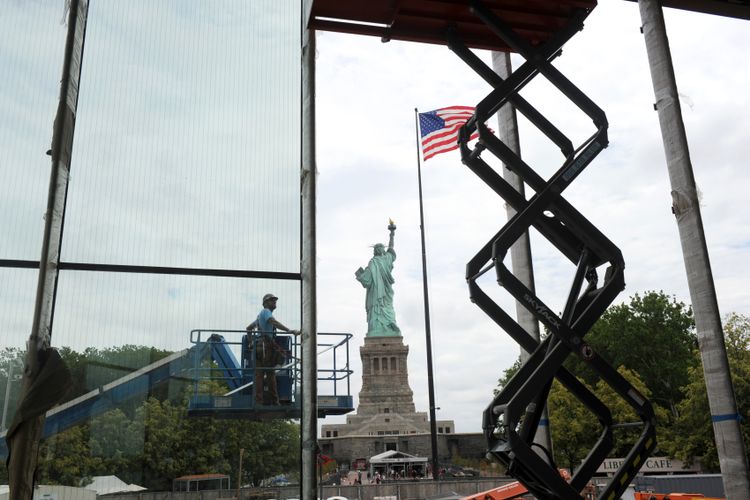 After two and a half years of construction, a new Statue of Liberty Museum will open to the public on 16 May on Liberty Island in New York Harbor, where the colossal statue has beckoned to newcomers since 1886. The 26,000 sq. ft one-storey museum, which was funded by $100m in donations, aims to educate visitors about the history of the statue through an immersive theater experience as well as exhibits like plaster models tracing the statue’s design and construction by the French sculptor Frédéric-Auguste Bartholdi. Visitors will be invited to express themselves by stepping up to a kiosk for a photographic self-portrait and choosing inspirational images that are then projected with each portrait on a giant screen. The tour culminates in a gallery viewing of the statue’s original 3,600-pound torch, which was replaced with a replica in 1986. Even more striking, however, are the panoramic views of the New York skyline from the museum’s roof. “The meaning of liberty is always contested,” says Edwin Schlossberg, president of ESI Design, which planned the immersive exhibits. “What we wanted to do was make an exhibition space that would encourage people to reflect.” Admission is free to anyone who purchases a ferry ticket to Liberty and Ellis islands.

Part-exchange Picasso and a cut price Van Gogh: antics of an art dealer
Nan Goldin teams up with Catherine Deneuve and Isabelle Huppert for photography show at Versailles
To Top
error: Content is protected !!
Top