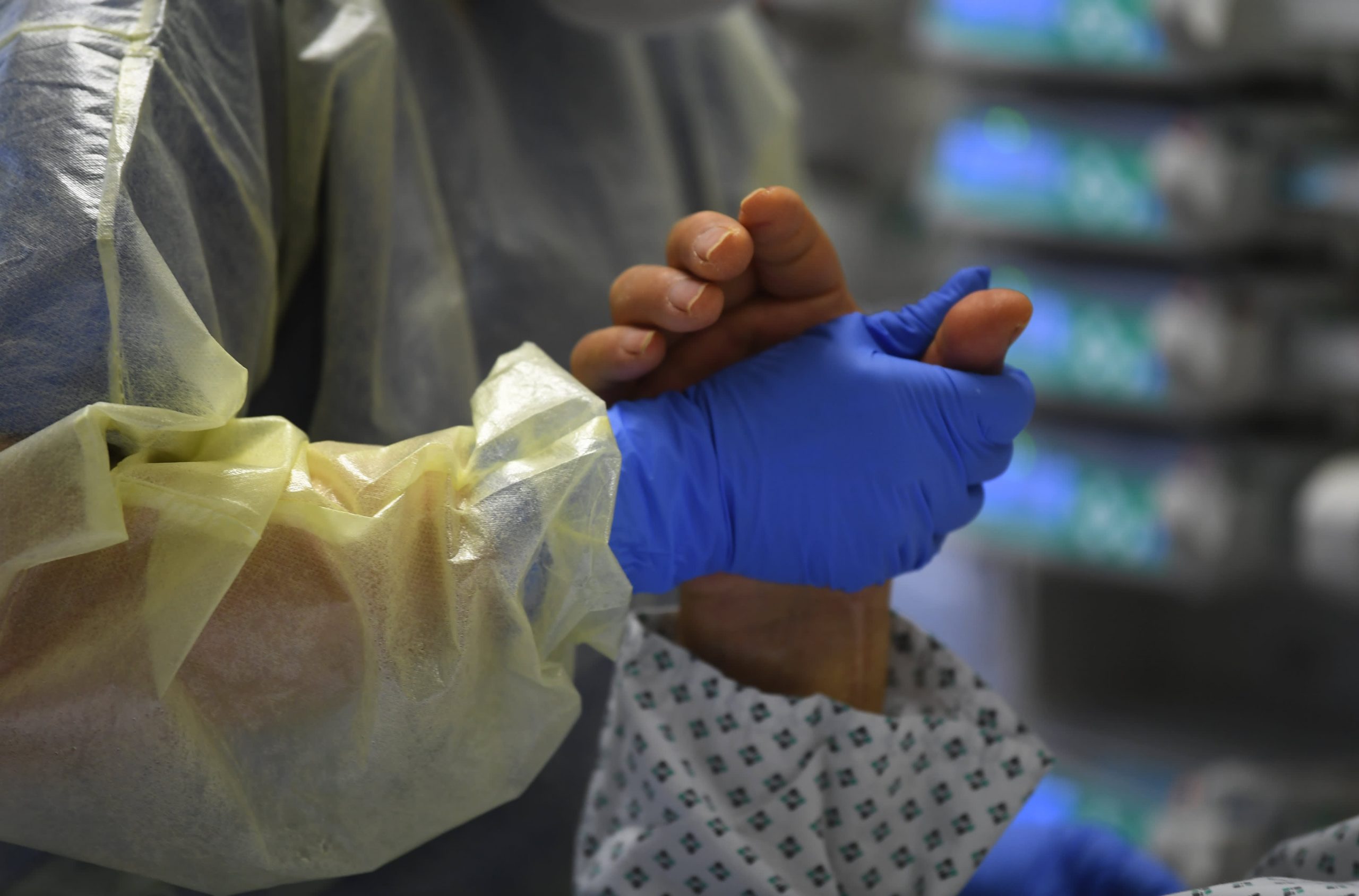 A healthcare worker cares for a Covid-19 patient in the ICU ward at the Robert Bosch Hospital in Stuttgart, Germany, on Tuesday, Jan. 12, 2021. Chancellor Angela Merkel warned that Germany faces hard lockdown measures into late March if authorities fail to contain a fast-spreading variant of the coronavirus.Bloomberg | Bloomberg | Getty ImagesIt’s one year since the World Health Organization declared the coronavirus outbreak a pandemic, and while the U.K. and U.S. sprint ahead in their vaccination rollouts, the EU is still mired in the depths of the crisis.The bloc is currently experiencing a lethargic immunization program and fears of another wave of infections are being seen from Paris to Prague.On the first anniversary of the public health crisis, there’s not much time in Europe to reflect on the losses of the past year — one in which the region has seen over 547,000 people die from the virus, and thousands lose their livelihoods.There are rising cases in parts of the bloc, largely caused by the spread of more infectious virus variants, from western EU nation France and across central Europe to Hungary, in the east.France reported 30,303 new coronavirus infections over the past 24 hours on Wednesday, with the number of new cases rising above 30,000 for the first time in two weeks. Health experts say the hospital system in the greater Paris region is close to breaking point, Reuters reported.Meanwhile, Hungary, the Czech Republic and Poland have all recorded a sharp rise in cases that has prompted urgency among governments in eastern Europe to increase the rate of vaccinations. So much so that several countries have resorted to breaking ranks with the EU by authorizing Russia’s coronavirus vaccine Sputnik V, which has not yet been approved by the EU’s drug regulator.Bulgaria and Serbia are also among the countries seeing a rise in cases, as well as Sweden and Italy.The coronavirus, which first emerged in December 2019 in Wuhan, was declared a pandemic a year ago, on March 11 2020. By then, it had already emerged in northern Italy, which became the epicenter of Europe’s first outbreak. The timing of the spread coincided with the height of the ski season, enabling the virus to spread to the U.K., France and Germany.The EU’s Covid experienceNational reactions to the pandemic varied, but the EU sought to coordinate its response, closing external borders to all but non-essential travel and attempting to coordinate the purchasing of personal protective equipment and medical supplies, like ventilators.Nonetheless, the state and structure of health services in different parts of the EU, and track and tracing systems put in place, played a part in determining the spread and damage done by the virus.Germany, for example, was lauded for its initial response to the virus, tracing and isolating those infected and their contacts. Its modern hospital infrastructure also helped it to limit deaths, compared to other countries. To date, Germany (with a population of around 83 million) has reported 2.5 million cases and 72,858 deaths compared to Italy’s (a country with 60.3 million inhabitants) 3.1 million cases and 100,811 deaths, for example, according to data from Johns Hopkins University.In total, the European Centre for Disease Control and Prevention says that over 22.5 million cases have been reported in the EU and wider European Economic Area (essentially, the EU plus Iceland, Liechtenstein and Norway) to date.The degree to which countries locked down their economies and public life as the pandemic took hold also affected infection rates.Most countries in the EU opted to shut down all but essential shops, closing gyms, restaurants, theaters and bars, shuttering the region’s cultural and social life, and its economy. Although some, like Sweden, were notable for their decision to not lock down, prompting controversy and criticism from other EU countries, particularly its neighbors.It has gradually shifted away from that position, however, particularly in the face of a third wave of infections and on March 6, tighter restrictions came into force on shops, gyms, pools, and sports facilities.Economic damageEconomies across the bloc hope to open up as soon as possible, but the emergence of new, more virulent strains of the virus have scuppered Christmas get togethers, the ski season and hopes that life could be getting back to normal by Easter. At the same time, the vaccination rollout across the bloc remains painfully slow compared to those in the U.K. and U.S.The latest data from France shows that 4.1 million people have received a first coronavirus vaccine, as of March 9. The U.K., by contrast, had delivered over 22.8 million first doses by the same date.The U.K. was quicker to order, authorize and administer vaccines than the EU, which made orders as a bloc rather than pursuing individual policies, a move that has been seen as hampering the dynamism of the rollout. The economic damage from the pandemic cannot yet be counted but repeated lockdowns over the last year have taken their toll. A feared new wave could also delay a much longed-for reopening.Data shows the damage the pandemic has already done to the region’s economy and citizens. Preliminary data from Eurostat, the EU’s data agency, released in February, estimates that GDP (gross domestic product) fell by 6.8% in the euro area and 6.4% in the EU in 2020.Eurostat estimates that 15.6 million men and women in EU were unemployed in January 2021. Compared with January 2020, unemployment has risen by 1.465 million in the EU and by 1.010 million in the euro area.