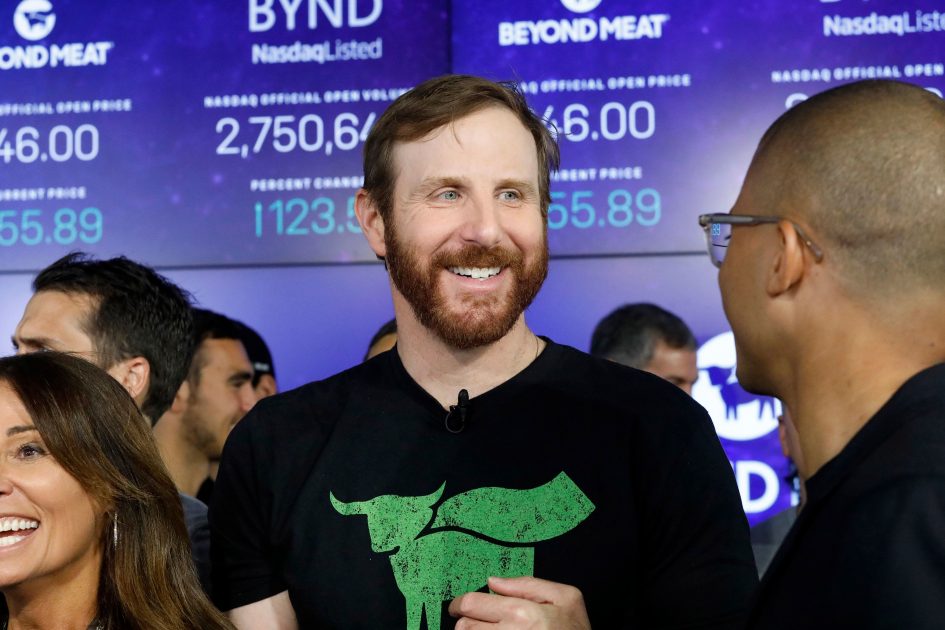 In this May 2, 2019, file photo Beyond Meat CEO Ethan Brown, center, watches as his company’s stock begins to trade following its IPO at Nasdaq in New York.

Investor enthusiasm for Beyond Meat is rubbing off on the companies selling its vegan meat products.

Beyond’s stock price is now eight times higher than its initial public offering price of $25. The company’s market debut in May gave investors their first shot at buying into the growing market for meat substitutes. Euromonitor estimates that the global market for meat alternatives will reach $18.7 billion in sales by 2023.

Restaurants have been adding plant-based meats to their menus in the hopes of attracting customers looking for meatless options. In addition to potentially lifting sales, the menu addition is also boosting those companies’ market values.

Another Beyond partner, Blue Apron, also saw a dramatic boost to its market value after it said last week that it would add Beyond’s plant-based burgers to its meal kits. Last Tuesday, shares finished the session trading up 35%, raising its market value to $134.7 million, up from $99.6 million the prior day.

The meal-kit provider’s stock has floundered as its business has struggled to find a loyal subscription base. It completed a 1-for-15 reverse stock split last month to keep its stock price above $1 and avoid being delisted on the New York Stock Exchange.

The halo effect from Beyond hasn’t lasted for Blue Apron. Its market value has dropped by nearly $14 million since July 16, and shares are trading down 2% Wednesday.

Shares of Beyond rose 5% in early trading Tuesday on the Dunkin’ announcement, giving it a market value of more than $12.0 billion. The stock hit an all-time high of $208.48 on Tuesday ahead of its earnings report slated for Monday.