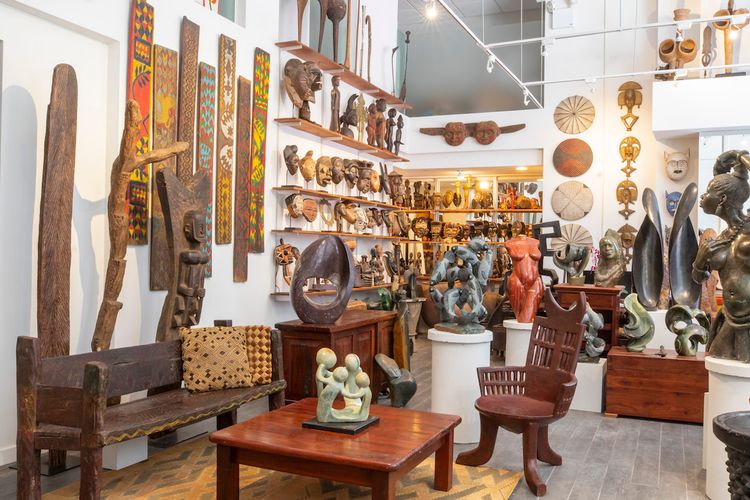 Hemingway African Gallery and Safaris, an enterprise co-founded by Gregory Hemingway, the late son of the American novelist Ernest Hemingway, and the South African-born dealer and safari operator Brian Gaisford, has opened a storefront in New York’s Tribeca at 88 Leonard Street after more than four decades in the Manhattan Art and Antiques Centre. The art and design gallery, which has doubled as a no-kill safari business since the 1980s, holds a vast trove of African artefacts and contemporary art collected by Gaisford in various trips across sub-Saharan Africa.

The gallery has a colourful history: Gaisford and Gregory Hemingway met while playing tennis in Central Park shortly after Hemingway finished writing Papa: A Personal Memoir, a book recounting his troubled relationship with his celebrated father. The two likely bonded over their experiences hunting in Africa, where Gregory retreated for three years after a traumatic fallout with his father in the early 1950s. In 1975, Gaisford rented the antiques centre space to host the launch party for Hemingway’s memoir and filled it with pieces from his African art collection. The show sold out and Gaisford kept the space open under the Hemingway name as a tribute to his friend.

Among the highlights of the collection are hand-carved Shona sculptures dating from the 1950s to today and sourced from self-taught artists in a northern pocket of Zimbabwe. “They’re all incredibly dense, semi-precious stones that are insanely hard to carve and there are no power tools or hammer and chisel involved”, according to Logan Gaisford, who runs the gallery with her brother Tuck Gaisford. The collection also includes artefacts such as ritual implements, masks and sculptures, silver and beaded jewellery and painted panels, as well as contemporary holdings of decorative art and furniture.

The storefront was “a natural progression for the gallery”, Gaisford says. “Tribeca has become a bit of an arts hub in general and there’s a great momentum and excitement around African art right now”.

What exactly is a museum? Icom comes to blows over new definition
German Nazi loot panel divided on Max Stern painting—but returns it to his heirs anyway
To Top
error: Content is protected !!
Top