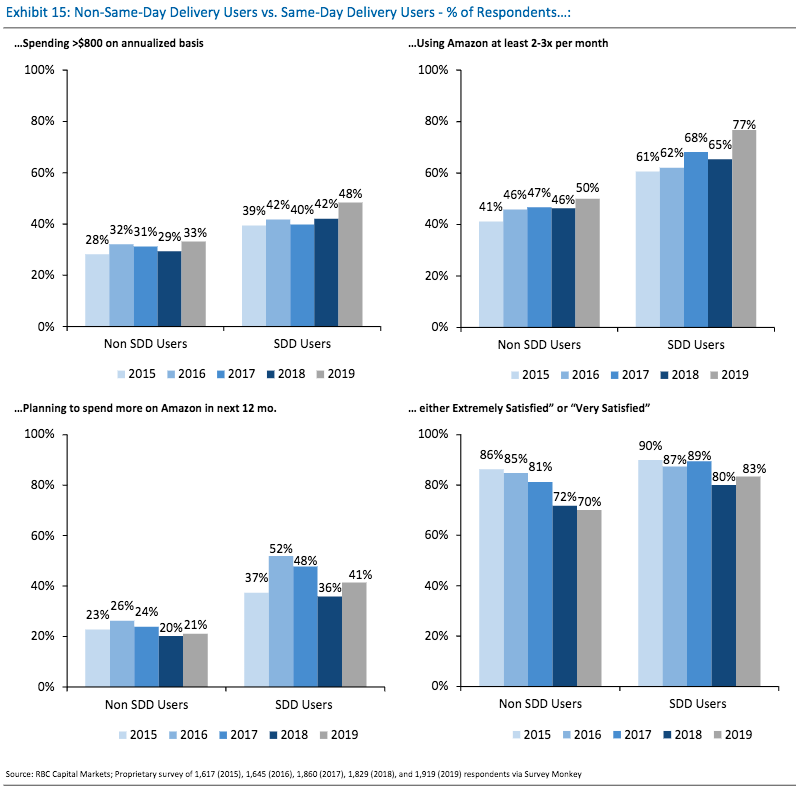 Amazon shoppers that get same-day delivery are likely to spend and shop more on the e-commerce site compared to non-same-day delivery users, according to a recent survey by investment firm RBC Capital.

The survey data shows why Amazon is heavily investing in shortening delivery time. In April, the company announced that it would spend $800 million this quarter alone to make one-day free shipping the default for its Prime members, down from the current two-day free shipping.

Here are some takeaways from the survey, which covered more than 1,900 people

“The clear takeaway is that with One-Day and Same-Day Delivery, and Prime Now (1-2 hour delivery), Amazon is creating more convenience and greater selection for shoppers, which enhances the value proposition,” RBC Capital’s Mark Mahaney wrote in a note published Thursday. “The gap between same day delivery customers and other Amazon customers widened across all four categories — spend, purchase frequency, intent of spend, and satisfaction.”

The results are largely consistent with RBC’s surveys from the past four years, although the percentages of people who say they will spend more and shop more often have increased slightly, while customer satisfaction has trended downward.

Kyle Bass says US has more leverage over China than ever before
Here’s a list of the stores Dressbarn plans to close next
To Top
error: Content is protected !!
Top