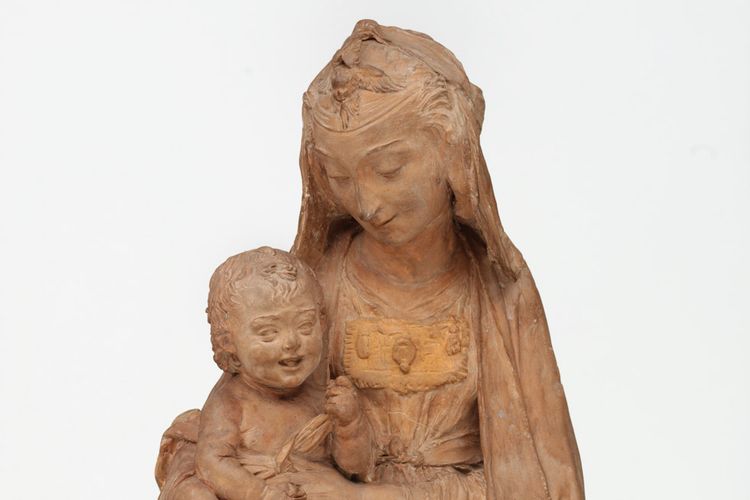 
The Virgin and Laughing Child (around 1472), in the V&A’s collection, has now been attributed to Leonardo
© Victoria & Albert Museum, London


The unveiling of yet another new Leonardo—especially during the artist’s much hyped quincentenary year—is surely a reason to be sceptical, rather than cheerful. Yet Leonardo’s “only surviving sculpture” of The Virgin and Laughing Child (around 1472) is now unequivocally presented to the world by the curators of a magnificent new exhibition devoted to Andrea del Verrocchio, Leonardo’s master (showing at the Palazzo Strozzi, Florence, with an additional segment at the nearby Bargello, until 14 July).

I travelled to the opening, having been urged to judge the attribution in the context of the exhibition’s scholarship, which offers comparative drapery studies on linen by Leonardo and Verrocchio as part of its surrounding argument. A week earlier I had visited the Victoria and Albert Museum in London (V&A), where the 50cm-tall Virgin and Laughing Child has resided for 160 years without fanfare. There, the terracotta is still attributed to Antonio Rossellino, following the view taken by the art historian John Pope-Hennessy.

No spectre of the salesroom haunts this new attribution. Francesco Caglioti—an expert on 15th-century sculpture—presents his own thesis, and the Verrocchio exhibition is much more than a monographic show. Spanning 30 years, it sets out to prove that Verrocchio was the artist most responsible for the artistic language of the Italian Renaissance in the 1400s, which Leonardo both imbibed and transformed. He was apprenticed to Verrocchio in around 1469 and was documented as part of his commercial enterprise as late as 1476, when Leonardo was accused—and absolved—of sodomy. A few years earlier, we can bear witness to the 20-year-old Leonardo, Caglioti argues, emerging in his own right, in his only surviving sculpture, this joyous terracotta (made around 1472, perhaps to mark the completion of Leonardo’s training). We are encouraged to see this youthful work as a legacy of Verrocchio’s and Desiderio’s gentle, smiling Madonnas and as a precursor to Leonardo’s vivacious Benois Madonna (around 1481). Caglioti reminds us that Vasari records in his Lives of the Artists that in his youth, Leonardo made, “in clay, some heads of women that are smiling… and likewise some heads of boys” and that one of Leonardo’s most famous works was a sculpture—the colossal clay horse for the Sforza court (destroyed).

For Caglioti there are many reasons to refute the original V&A Rossellino attribution, not least the simpler draperies and the more abstract sentimental reverie of Rossellino’s Virgins. Leonardo, he says, has revived “a Donatellesque attitude”, creating a remarkably natural relationship between mother and son.

The germs of Leonardo’s universe and lifelong preoccupations emerge

Caglioti adds that Donatello’s children, however, are always distracted by something outside, occupying the viewer’s space; they are never so joyful. This Christ child is laughing as he tugs at a strip of cloth. His mother clasps his tummy, while regarding him with sheer pleasure and maternal pride. There is no hint of Christ’s Passion to come, or the decorous solemnity that invariably clouds this particular mother-and-child relationship.


Leonardo’s drawings of draperies, such as the Louvre’s Drapery for a Seated Figure in Nearly Frontal View (around 1475–80), support the attribution
© Michel UrtadoRMN/Grand Palais (musée du Louvre)


The Leonardo scholar Carmen Bambach from the Metropolitan Museum of Art, New York, was on hand at the unveiling to endorse Caglioti’s view. An expert on Leonardo’s drawings, she has studied closely the artist’s early drapery studies on linen which provide the crucial comparisons for the attribution. She is the author of a forthcoming four-volume study on Leonardo, which will include the sculpture as autograph: “It is in my book as a Leonardo, full stop,” she says. The features that—to her—make it irresistibly a Leonardo are all present, rendered with all the immediacy of modelling in clay. She points to the draperies’ complex gradations from light to dark, with all the infinitesimal gradations in between, revealing Leonardo’s already unmatched control of the depth of shadow; then to the subtle complexities in the play of draperies, with their graceful cadencies revealing the body underneath. Looking closely into the folds and shadowy recesses, the germs of Leonardo’s universe and his lifelong preoccupations emerge: his atmospheric treatment of light and shadow in forms, his “multi-perspectival way of looking”, his “anatomical conceptualisation” of the figure.

Then, Caglioti adds, there is the unconventional laughter of the child, the delicacy of the mother’s outward and interior smile (comparable with the mysterious smiles in the Louvre’s Virgin and Child with St Anne and Virgin of the Rocks), the attention to the knuckles of the Virgin’s elongated fingers, and the ambiguity of the seraphim whose splayed wings adorn the crown of the Virgin’s head: is the seraphim a jewel or is it real, and does it even matter?

For Bambach, “Leonardo is always playing—art, for him, is a fiction. He always breaks all the rules.” This disruptive, lively, inventive Leonardo is, I must confess, much closer to the one I recognise than the strangely inhibited Leonardo of the Salvator Mundi.

The Virgin and Laughing Child has never before left the V&A, which remains cautious about the new attribution. “No one ever asked for it”, Caglioti says with a grin: “I expect nobody will ever obtain it again.”

Hockney-Van Gogh exhibition is ‘a tame, though colourful, bit of fluff’
Sunday in Chapultepec Park with Carsten Höller
To Top
error: Content is protected !!
Top