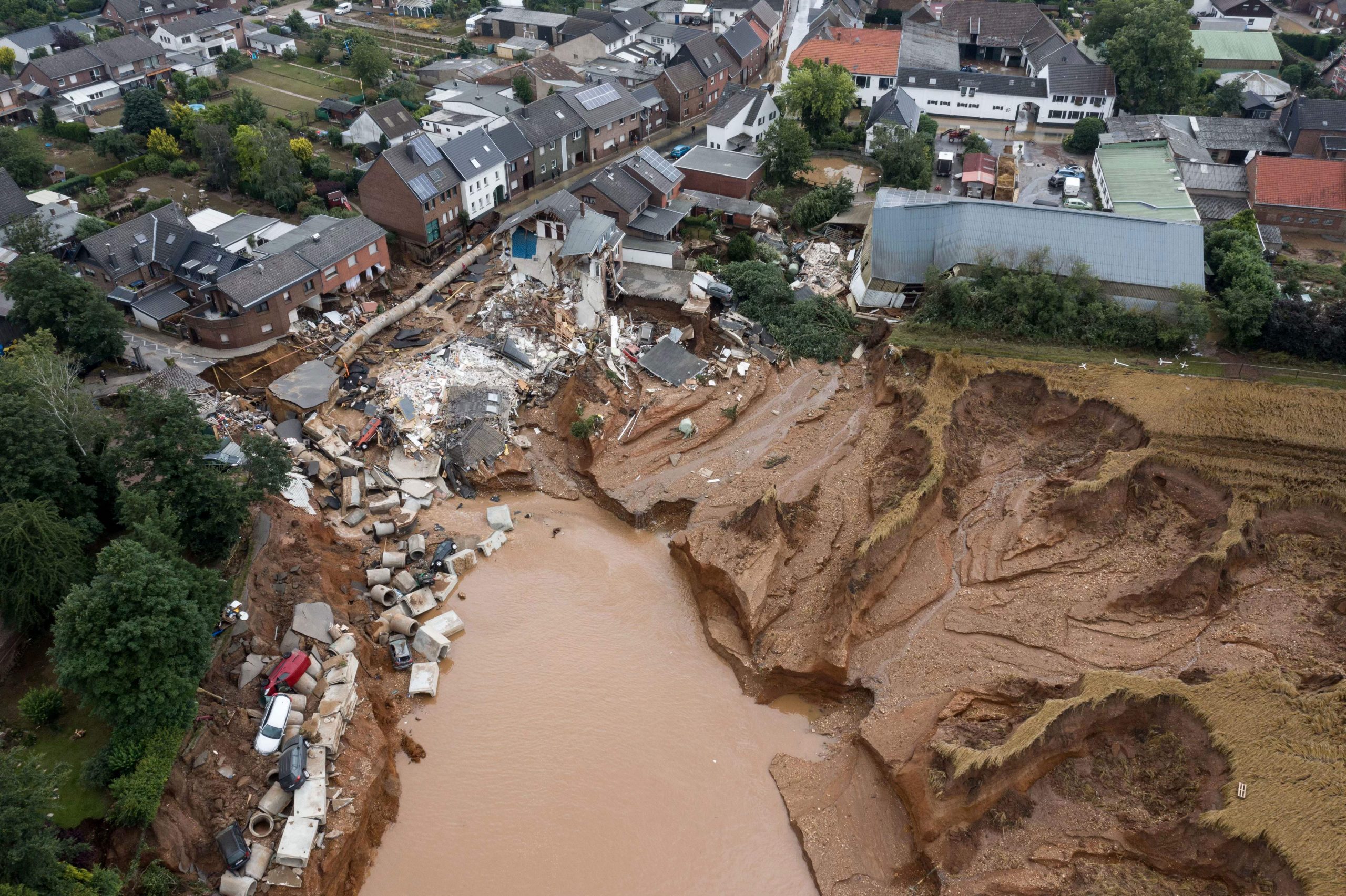 TOPSHOT – Aerial view shows an area completely destroyed by the floods in the Blessem district of Erftstadt, western Germany, on July 16, 2021.SEBASTIEN BOZON | AFP | Getty ImagesThe 2021 holiday shopping season could be marred by out-of-stock goods and shipping delays as the recent floods in Europe and China exacerbate already strained global supply chains.Western Europe and China’s Henan province — a key transport hub and home to several major businesses — are grappling with the aftermath of devastating floods.The disasters have damaged railways used for the delivery of goods and raw materials in both regions. Water rushed into industrial areas extensively damaging facilities, machinery and warehouses, companies in the supply chain industry told CNBC. “Black Friday and the holiday season, for which products (and raw materials) are being staged, will face the brunt of the impact,” Pawan Joshi, executive vice president of supply chain software firm E2open told CNBC in an email. “Consumer electronics, dorm room furniture, clothing and appliances will all continue to be in short supply as back-to-school shopping starts up, and will trickle into the peak holiday shopping season,” he said. Delays from the distribution of raw materials needed to produce goods will have a cascading effect and disrupt supply chains “for weeks and months,” Joshi said.The flooding has the potential to throw another wrench into the mix for the auto industry, which is already reeling from a semiconductor shortage.Pawan Joshiexecutive vice president, supply chain software firm E2openSeveral companies, including Germany’s largest steel maker Thyssenkrupp, have declared force majeure. A force majeure event occurs when unforeseeable circumstances, such as natural catastrophes, prevent one party from fulfilling its contractual duties, absolving them from penalties.Some of the worst-hit industries from the floods include autos, technology and electronics, according to those that CNBC spoke to.Auto production hit again after chip shortageCar production is likely to be hammered by manufacturing delays as many of the world’s major automakers and their suppliers are based in regions devastated by the floods.”The flooding has the potential to throw another wrench into the mix for the auto industry, which is already reeling from a semiconductor shortage,” Pawan said.Manufacturing facilities in Germany, the Netherlands, Luxembourg and Belgium are expected to bear the brunt of the damage from the floods, supply chain risk management firm Everstream told CNBC via email. Many suppliers that provide specialized parts for the auto, technology and aerospace industries are based there, said Shehrina Kamal, vice president of intelligence solutions at Everstream. “As floodwater started to recede, most major highways and roads were expected to be cleared over the past weekend; however, due to the extent of water damages in some affected industrial areas, manufacturing operations are unlikely to resume as quickly, potentially impacting supply availability,” she said.”Given that some companies have already issued profit warnings and even declared force majeure, the effects of the flooding will likely continue to ripple through supply chains for several weeks to come,” Kamal concluded.Zurich-based Klingelnberg, which produces gear components, issued a warning that the damage to its Hueckeswagen plant in Germany could hurt its revenue targets for 2021. Disruption of copper bad news for electronicsThe floods could also disrupt the supply of copper, which is used in many products from electronics to electric vehicles.The flood-hit Henan province in China is a major copper production hub, noted Vivek Dhar, a commodities analyst at the Commonwealth Bank of Australia.Copper prices last week rose strongly on supply concerns, he said, as Henan has seen strong growth in copper smelting in recent years. “Copper demand hopes are linked to rebuilding damaged infrastructure in central China. The power sector in China is a particularly strong driver of copper demand,” Dhar wrote in a note last week. Over in Europe, Aurubis GmbH – a supplier of high-precision copper wires for the electronics and electrical equipment sectors – declared force majeure on deliveries following extensive flooding at its plant, according to Everstream Analytics.Read more about China from CNBC ProMeanwhile in Henan’s capital Zhengzhou, the disruption could hit a broad swath of industries from autos to pharmaceuticals and biotech, said Ryan Seah, APAC intelligence analyst at Everstream.”Zhengzhou is a vital transportation hub and is one of China’s principal cities along the Belt and Road Initiative,” said Seah, referring to China’s mammoth infrastructure plan that stretches across several countries and continents. He added that the city is home to 91 companies listed in China and a wide range of sectors.Zhengzhou is also home to a major factory run by Hon Hai Precision Industry, also known as Foxconn. It is the world’s biggest assembly plant for Apple’s iPhones. Foxconn previously told CNBC that it had “activated an emergency response plan for flood control measures in that location.”