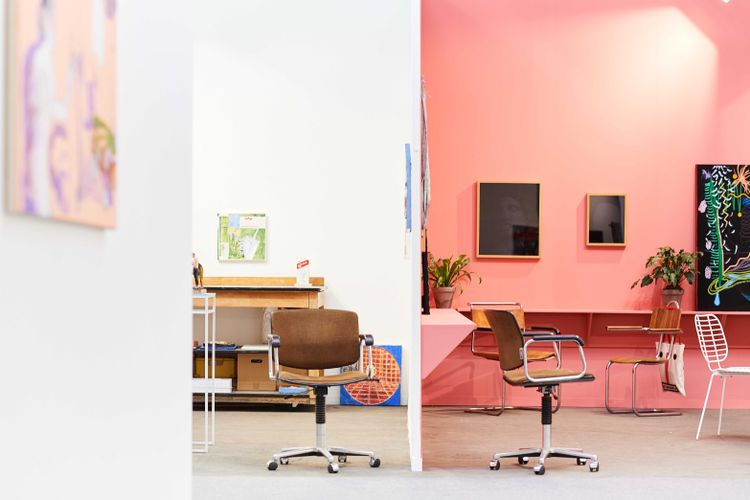 
As the gallery landscape undergoes considerable remodelling, most art fairs are adapting too, allowing unorthodox exhibitors with no fixed abode and no regular programme to participate.

Art Brussels has come up with its own solution this year: the creation of a new section, dubbed Invited, dedicated to nine galleries that are challenging the traditional gallery model, including pop-ups, collaborations and nomadic operations.

The key, says the fair’s managing director Anne Vierstraete, was to invite the galleries, rather than getting them to apply via the usual process and approved by the selection committee. The new section came together just a few weeks before the fair opened on Thursday (until 28 April).

The impetus partly came from Vierstraete’s desire to make Art Brussels more “daring and cutting edge”, and partly to boost the struggling middle and lower tiers of the market. Prices of booths in the Invited section are half of that in Discovery, which supports emerging artists.

However, some dealers have questioned the thinking behind the new initiative. “I was invited the day before [Art Brussels] sent out the list of fair participants, so what does that mean? Do they not really care about this section? Weren’t they ready with their product?” asks the Antwerp-based dealer Simon Delobel, who adapts the nature of his gallery to each artist he exhibits.

Delobel’s booth, which he considers a gallery, is titled Paid by the Artist because his artist, Yannick Ganseman, stumped up the €4,000 participation fee. “When Art Brussels called me I had a cash flow problem, I couldn’t pay immediately and Yannick offered to finance the project,” he says.

The title is also a comment on how “thousands of artists with great works are starving to exhibit and don’t find a way. For the luckiest, they will be ‘rediscovered’ when they’re dead”, Delobel says.

By the end of the first day at the fair, however, it seems the gamble had paid off. Delobel had sold enough work to pay back Ganseman and make a small profit.

Art fair first-timer Alice Black, who is showing paintings by Tristan Pigott, Lee Marshall and Marty Schnapf (priced between €3,500 and €14,000), says Art Brussels approached her quite late. “They were very keen on emerging galleries spotlighting emerging artists. They want young blood,” she says.

Encouraged by the feedback from Belgian collectors, whom Black describes as “very open”, the young London-based dealer estimated to have sold a third of her booth by the end of the first day.


Galleries that were established without a permanent home are being given a platform at the fair, including Ballon Rouge Collective, which mounts pop-ups in various cities using a network of curators. The gallery signed a ten-year lease on a space in Brussels in March, but, before that, they were rejected from numerous other fairs as their model “is not standard”, says the co-founder Nicole O’Rourke.

Damien & The Love Guru is another roving project that put down roots in Brussels three years ago. The gallery has collaborated on a booth at Art Brussels with the architectural group Parasite 2.0, which has built an extra wall to create a more intimate viewing space for a video installation by Margarita Maximova (edition of four; €3,000 each), as well as other works on the stand. The gallery’s co-director Priya Shetty says it was “stressful logistics-wise” not having a permanent space. “People know where we are now,” she adds.

Solo or two-man shows are usually the pre-requisite for sections dedicated to younger galleries and emerging artists at fairs. Instead, Art Brussels has given exhibitors free reign on who and what to bring. Counter Space from Zurich is showing five artists, several on the ultra-emerging end of the spectrum including the student Antoinette d’Ansembourg. Three of her four ceramic sculptures sold on the opening day, priced at €1,500 each.

“Ninety percent of art fairs show paintings so we wanted to do a sculpture show about sculpture,” says Angelo Romano, the co-founder and curator of the gallery. A performance by Anne Rochat involving the Swiss artist pressing her naked body against a lump of melting ice that trickled into the aisles was also stopping fair-goers in their tracks.

Such projects may have momentarily caught the attention of collectors, but will the Invited section become a permanent fixture–unlike many of the galleries it represents? Vierstraete says she has questions about the efficacy of less traditional models (“how much do they really help artists?”), but, she adds: “I will fight for it”.

Twelve exhibitions not to miss during Frieze New York
How did Salvator Mundi go from $1,000 to $450m? Plus, the tragedy of Van Gogh’s only love
To Top
error: Content is protected !!
Top