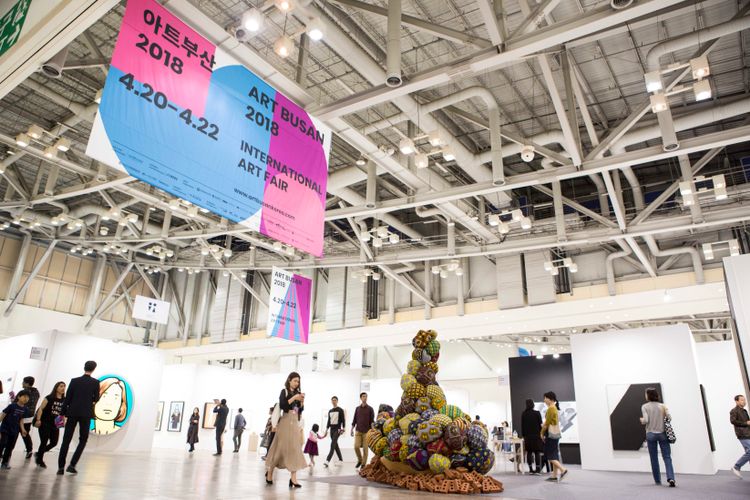 “Korea’s art market continues todevelop and improve with new channels of presenting and collecting art,” he says. “Two major auction houses, K-Auction and Seoul Auction, are actively expanding the Korean art market, along with Art Busan and KIAF [Seoul’s Korea International Art Fair], Korea’s top two art fairs.” He adds that Korean collectors are now a staple of the global market and says “the [South] Korean economy is one of the most stable and developed in Asia and also globally, with a GDP per head of almost US$40,000.” What impacted the Korean economy more, Jeong says, “was the political tension between China and Korea [in 2017]”.

The fair attracted around 60,000 visitors last year, and this year has 164 participating galleries from 17 countries, including European first timers Almine Rech, Peres Projects, SOCIÉTÉ and König Galerie. But major Asian galleries, in particular, have a growing presence, including Shanghai’s MadeIn and Tang Contemporary Art, the latter with locations in Bangkok, Beijing and Hong Kong.

Jeong says that many galleries are interested in the Asian market but lack “any network or success in art fairs in China” and struggle with China’s high taxes and labyrinthine customs procedures. “In Korea, there is no VAT on buying a work of art, other than photography above certain value,” he says, adding that he believes Korea’s role in the art market “will be pivotal than ever before,” hence the global galleries launching Korean locations, including Lehmann Maupin, Pace and Perrotin. Though lesser known as an art centre than China or Japan, South Korea’s economy, Jeong continues, has quickly become one of the top ten strongest in the world.

The second largest city in South Korea, Busan’s art scene centres around a respected biennale and two museums, the Busan Museum of Art and the Museum of Contemporary Art Busan. Although there are over 60 commercial galleries in the city (over a dozen of which participate in the fair), “not many of them are active players in the international art scene,” Jeong says. “As locals from Busan, we wanted to highlight more on our city and change this imbalance.” The Seoul mega-gallery Kukje launched its second location here last August, joining Busan stalwarts such as Johyun Gallery, and several private museums are currently under construction.

Kukje’s founder and chief executive Hyun-Sook Lee, who has an exhibition of Ha Chong-Hyun in her Busan gallery during the fair, says she had never planned to launch a branch outside of Seoul as “we have always been set on maintaining a strong local outreach as our international presence had already been established through all the international art fairs we participate in.”

But after exhibiting in Art Busan from 2014, she “saw the city’s potential to become another arts hub in Asia” and accepted an invitation to open a space in F1963, an arts complex in a converted wire factory. “Eventually, we hope to work with local artists and include them in our program. We strongly believe that Busan has the potential to reach a global status.”