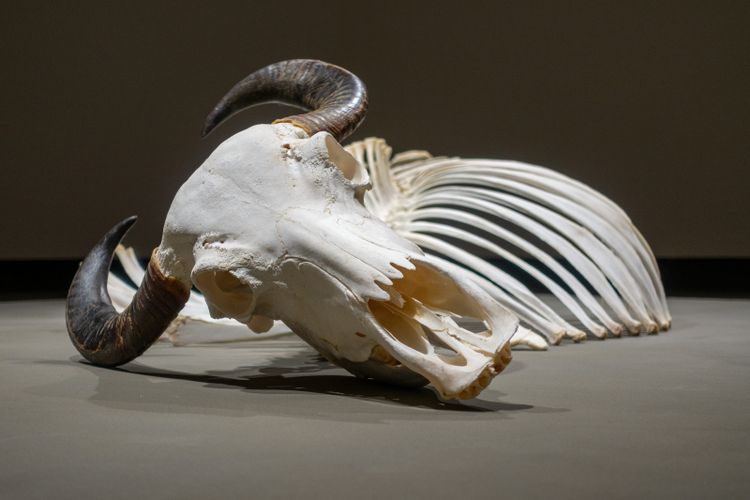 The French curator Nicolas Bourriaud addresses the climate crisis in the 16th Istanbul Biennial which launches this week in the Turkish megalopolis (14 September-10 November), giving his take on urgent environmental issues in The Seventh Continent show. The title of the biennial refers to the huge island of human waste floating in the oceans—made up of detritus such as plastic bags and cotton buds—covering an area five times bigger than the surface of Turkey. This mass is the “embodiment of the Anthropocene, a moment when the influence of human activities on the biosphere has become a major dramatic ‘geological’ force, wreaking a drastic effect on Earth”, Bourriaud adds. He argues that artists “work as anthropologists in a way” in the biennial. “The artists I invited explore this territory where humans and non-humans, machines, waste, animal life and trees are colluding to produce new forms.”

Fifty-six artists feature across three sites including the Pera Museum and Büyükuda Island, documenting “the landscape of Anthropocene”, says Bourriaud. Thirty-six of the participants have made new works. These include the Polish artist Agnieszka Kurant whose Post-Fordite (2019) sculptural piece is a talking point. The work is a “natural-artificial hybrid formation”, incorporating automotive paint known as Fordite or Detroit Agate that has congealed into a pattern resembling an ancient geological formation.

Other works that adhere to the biennial theme include Ozan Atalan’s installation Monochrome (2019), that examines the destruction of water buffalo habitat around Istanbul, and Eloise Hawser’s multimedia work, The Tipping Hall (2019), centred on a film shot inside one of Turkey’s largest waste recycling facilities.A key sculptural installation, Extrakorporal (2019), by the Berlin-based artist duo Pakui Hardware (Neringa Cerniauskaite and Ugnius Gelguda) explores organs grown and cultivated outside the human body, throwing light on regenerative medicine and tissue engineering. Cerniauskaite and Gelgudasay that the pieces were made specifically for the biennale, and were shipped in from Berlin.

Asked if the art world itself should be more concerned about its carbon footprint, the artists add: “The art world should be and is worried about its own footprint [at] biennials, triennials and art festivals. A number of artists are talking about that in their work. However, it is important to note that the biggest footprint producers are 100 international corporations along with the eight biggest nations and their economies; thus the footprint the art world makes is only a fraction [of the world’s footprint]. The art world is already reflecting its own role in [the climate crisis].”Bourriaud says that the “real issue is mass tourism, it’s not the people who come to biennials. Let’s not assume the role of the guilty ones. The real fight is [against] mass tourism. If we stopped all of these exhibitions, it would be like a drop in the ocean.”The Belgian collector Alain Servais singled out Pakui Hardware’s installation as a highlight, as well as a series of sculptures by German artist Johannes Büttner whose work—The possibility of another life expresses itself directly in a cop car on fire and obliquely in the faces of my friends (2019)—comprises seven sculptures “formed out of different earths [on-site material]”. The pieces look like futuristic terracotta soldiers turned upside down.Büttner says that he produced the piece in Istanbul. “Of course, the art world with its constant travels and flights should question [itself]…. I think the Istanbul biennial can help to develop awareness of ecological problems and pollution. I can see a change in behaviour and increased awareness already.”

Servais says meanwhile that the biennial is “slightly disappointing. It can be summed up in four words: anthropocene; environment; capitalism; archaeology. There were no new angles because many of the works, despite the urgent subject, are literal. They are quite descriptive, almost documentary like. Art needs to question and investigate. However, there are some very good works across the exhibition, especially Simon Fujiwara’s installation [It’s a Small World, 2019, which combines popular culture symbols such as The Simpsons with architectural miniatures].” A London-based curator, who preferred to remain anonymous, says that Bourriaud “has been bold and astute, taking on such vast, complex issues. The Seventh Continent curatorial framework is not always coherent but the art world needs to focus on these pertinent concerns. Should we just stand back and look on otherwise?”